Onion Omega2 and Omega2 Plus are MediaTek MT7688 MIPS based WiFi boards for IoT applications that were launched in 2016 for as low as $5. Both boards run OpenWrt (LEDE at the time), and Omega2 Plus included more memory and storage with respectively 128MB RAM, 32MB flash and a micro SD card.

But Onion team found out that many users needed more storage space, and they’ve now come up with Omega2 Pro model with the same processor, 128MB RAM, and large 8GB flash considering we’re talking about a board running OpenWrt 18.06 here. 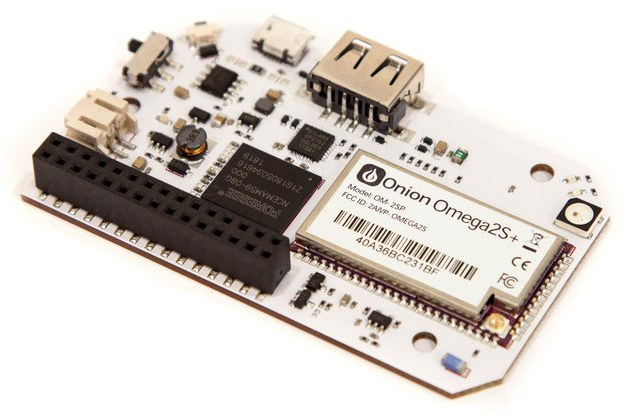 While running OpenWrt 18.06 Linux you’ll actually see 512 MB of RAM, because the firmware complements the 128 MB RAM with a 384 MB swap file stored in the flash memory.

The board also takes advantage of the hardware and software ecosystem from Omega2 / 2+ boards with various expansion boards for NFC/RFID, ADC, GPS, OLED display, PWM servo, Ethernet, relay, and a prototype board, as well as documentation and support forums.

The OS itself is actually called OnionOS, and while it relies on OpenWrt, it also included a neat web configuration interface accessible from your web browser, and you can easily develop from the browser using the Terminal and Code Editor apps. 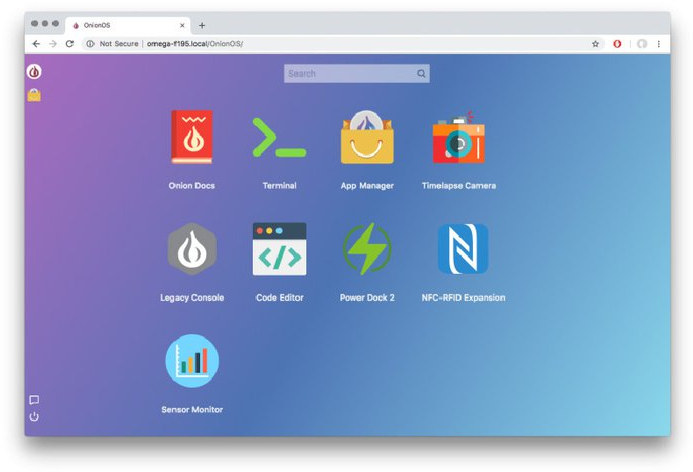 The extra storage also means a bunch of packages are installed and Python, GoLang, NodeJS, PHP, C and C++ languages are supported out of the box.

The board launched on Crowd Supply a little while ago, and already raised over $20,000 from about 200 backers. A $49 pledge is required for Omega2 Pro board, and bundles with expansion boards are also available for $82 and up. Shipping is free to the US, but adds $6 to $10 to the rest of the world depending on the selected rewards. Delivery is scheduled for the end of January 2019, and the company already posted an update announcing mass production had started for a batch of 500 units.

And this results in them advertising this thing as having 512 MB RAM (since when is slow swap RAM?!). See at the Crowdsupply site starting at ‘Comparisons’ with other boards like RPi and BeagleBone Black (why not comparing with an Orange Pi PC Plus or a NanoPi DUO for example? Ah, they would be way more powerful and less expensive at the same time).

What is the target audience? People who believe a PMIC and 8GB eMMC cost more than $30?

Or even the pocket beagle which is more powerful, $25, has good upstream support, is as reliable as the BBB etc.

Target audience was apparently me as I spent $$ on the kit when the Omega2+ was crowdfunded. I had not yet bought my first RPi and played with it a bit (boot, log in, check out the tools, etc) but put it on the shelf until a week ago. Since then I have re-initialized it twice after running out of memory or having something else go wrong. I’m about to do it again and try and configure the SD card as storage. There is a great deal of documentation but it all seems to stop just before it explains that aspect clearly and with a process. I’ve been using *nix on and off since 1975 so this is not exactly my first rodeo. Nevertheless, I have never had the problems with a Pi that I am having with this. I’m an engineer but not a “software guy” and was looking for a little IoT device to “do something” around the house. I’ve since gotten into RPi (Pi0W for $5 on sale at MicroCenter! bought several) and can program the ESP8266 family pretty well (I build sell network-connected Escape Room props). Given the troubles I’ve had trying to get off the ground with the Omega2+, it may just go into the box of dead ESPs & Arduino Nanos and “why did I buy this again??” trinkets.

Also, try as I might, I could not find any comparisons on crowdsupply… And yes, the NanoPi Duo looks pretty interesting.

If you only have 128MB of ram having 8GB of storage seems a bit weird really. 32MB is enough for two copies of a kernel, buildroot userland with wpa_supplicant etc and a reasonable application written in C.

I am constantly amazed at these hobbyist wonders coming out at high prices and with lame specs.

Compare the price/performance with an Amlogic Android TV box 1G RAM, 8 G flash going for $30. And yes they will now have kernel 4.xx on it soon with your choice of JeOS.