Last year, Imagination Technologies launched their first community development board with MIPS Creator CI20 powered by Ingenic JZ4780 dual core MIPS processor running both Android and Linux, and now supported by various projects. The company has been teasing about its MIPS Creatort Ci40 for a few weeks, and was already announced as the MIPS platform of choice for Google Brillo operating system, but the board has now officially been launched via a Kickstarter campaign where you can get the board for $53, as well as some add-on boards. 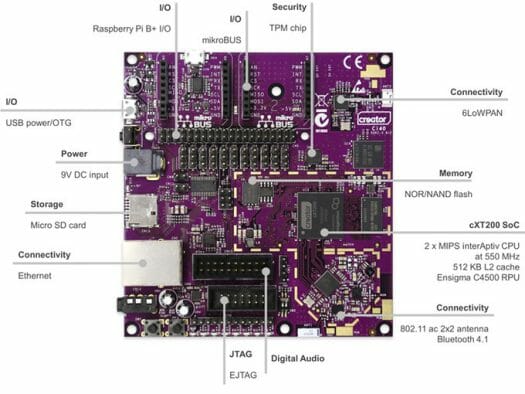 But instead of using a processor from one of their partner, Imagination just designed their own MIPS interAptiv SoC for the board.

The board will support Linux (buildroot), Brillo OS, Debian, and OpenWRT. Optimized GNU tools and library will also be provided for the MIPS platform, and the board will have access to the cloud via the company’s FlowCloud IoT framework. Some code sample for the latter  have already been provided on github.

In Internet of Things projects you also need “things”, and not only a gateway, so the company is also offering Creator Ci40 IoT kit with Ci40 board, as well as two MikroElektronika’s 6LoWPAN Clicker boards  powered by 2 AAA batteries acting as nodes (i.e. things), and three Click boards fitting in mikroBus sockets.

The Clicker boards are powered by a MIPS based Pic32MX micro-controller, and run Contiki real-time operating system. As reported in my post about HummingBoard Gate board, there are over 150 Click (add-on) boards to both Ci40 and clickers board functionality can be augmented by any of these standard add-on boards by MikroElectronika.

While Creator Ci40 board itself is 35 GBP (~$53), you could consider getting the IoT kit instead for 70 GBP ($106). Shipping is not included, and they charge a flat fee to any destination ranging from 5 GBP for th board only to 12 GBP for the various kits. Delivery is scheduled for April 2016. You can also find more details on Imagination’s Creator Ci40 product page.

Kudos to them for not making yet another boring video-player-for-kiddies board. Hope people will use it to develop nice-running software, not to run existing ugly bloatware like xbmc or how it’s called now. But $53?

Why/when would someone prefer this solution above a Raspi solution (for 35 USD)? The built-in wifi?

Why do they gather money through Kickstarter? Doesn’t Imagination Technologies have enough to develop this board?

@Gabe
It’s not about making money, it’s all about exposure and Kickstarter is a good way to that and it’s also an easy way to collect the money from random people en masse.

@TLS
You can also power the board via micro USB.

@Sander
The board has built-in 6LoWPAN, faster Wi-Fi and Ethernet, Bluetooth, on-board memory etc. in addition to the expansion boards (Clickers) and the companion boards (Clicks)

But it’s not only about the hardware, we’ve built a complete software framework based on open standards that allows you to connect devices to the cloud.

How does pricing on the Ensigma C4500 RP compare to something like the Ampak AP6335? Maybe you should make modules with the same footprint? AP6335 is $7.50 or less if you buy a lot of them.

@Jon Smirl
Maybe I am confused, is the Ensigma C4500 RP on the cXT200 chip? Then what is the other chip in the RF section below the main SOC? Schematics would help to understand.

Does it allow to use all 32 gpio pins at once using single read/write operation? So far many hobbyist boards allow max 16 gpios to be used at the same time, the rest is either pinmuxed with other essential peripherals or require extra read/write operation, which is kind of limiting.

@Alexandru Voica
Alexandru for the first time I’m happy with an Imagination product and have nothing bad to say about it. This is open source and completely hackabel so I’m happy and I ordered one.
Only thing I’m not sure about it what to do with all that processing power… for some of the simpler home automation even 32bit microcontroller is fine …. I’ll have to think about it ….

What strikes me as odd, as it’s not mentioned anywhere in the spec, is the second Samsung chip, which seems to be a KLM4G1FEAC-B031 which is 4GB of eMMC. Was this removed last minute to save cost?

@TLS
If you want to play, these sensor tags are $29.
The radio can do BLE or 802.15.4 depending on firmware loaded.
http://www.ti.com/tool/cc2650stk?keyMatch=cc2650&tisearch=Search-EN-Everything

@Jon Smirl
Ensigma is a baseband connectivity engine (a DSP) integrated inside the SoC, it is not a separate module. Only the RF part (i.e. the antenna) is external. The schematics will be available soon.

@Marius Cirsta
Once you connect hundreds of sensors and relays, having all that processing power (and the multithreading capability) starts to make sense. IoT is a major reason why a lot of the MCUs are going 32-bit.

@TLS
The eMMC chip has been added for the Brillo configuration. That version of Creator has been selected as a starter board for early developer engagement.

What is the estimated price for the cXT200 by the reel?

I am skeptical that they will become an SoC end product provider. Really they just want one (or more) of their licensees to step up and adopt/brand/distribute/support this.

The board and kit are now available on Mouser -> http://www.mouser.co.uk/imagination-technologies/