If you want to add an extra screen to your laptop, we’ve previously covered DUO add-on display, a full HD 12.5″ display that can be placed on the left or the right of the display, and it was launched via a crowdfunding campaign that ended up being popular with over $800,000 raised from more than 4,000 backers. The display is however 1.2 cm thick and weights 680 grams, which does not seem too bad until you hear about LAPSCREEN.

Developed over several years by Mr. Black (Michél Haese), LAPSCREEN is also a 12.5″ display with Full HD resolution, but it only weights 200 to 300 grams depending on whether you select the non-touch or touch version, and comes with a 4 to 8 mm thickness.

Such displays enable what Michél calls the “portable office”, so you’d have your laptop for example, and if you ever needed four extra screens as shown above it would add less than one kilogram to your bag’s weight with non-touch screen. The displays are all connected to a single new Macbook over USB-C, and everything is powered by a single 60W USB type-C power adapter connected to either one of the displays.

With smartphones getting smarter, as powerful as actual laptops, and getting support for desktop mode, LAPSCREEN would also enable lighter computing with a ~200 grams display, under 200 grams smartphone, couple with a Bluetooth keyboard, and USB-C power adapter, so eventually you could perform productivity tasks with hardware weighting less than one kilogram. A mouse could be added to the setup, or the smartphone could server as a touchpad for the display. 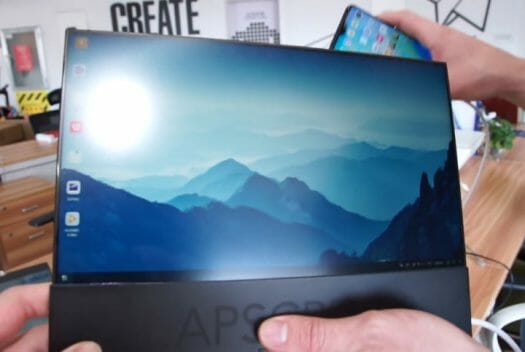 Beside USB type-C, you can also connect any device with HDMI output, and basically any output when using an adapter including DisplayPort, DVI, VGA. or even WiFi via a MiraCast dongle. The display is 12.5″ because it matches US letter length, A4 paper width, and can be carried with other documents, and in folders designed for paper. Another idea behind this concept is also that people would print less since they can check documents on multiple screens, and using either portrait or landscape, but I’m not sure I’m convinced about that part.

The key selling point of the display is clearly its weight, and Michél thinks that ideally people should not need a stand or protective cover that add to the total weight, and instead use the display lying flat on the desk, or be just as careful with the display as you would with important documents. I don’t think I’ll be willing to work with a display lying flat on a table, as it seems uncomfortable, but time will tell. I understand such accessories will still be provided since customers ask for those. You can watch the 26 minutes video showcasing the solution, and Charbax interview of the inventor.

Faytech will take care of manufacturing of the LAPSCREEN display, offering a non-touch version for about $200, and the touchscreen model for about $300. All with come with USB-C ports, as well as HDMI or micro HDMI ports.

The official website only has a few extra details at this time.

This device looks really nice! And for a touch screen it’s not too bright nor glossy.

just make it a clamshell with keyboard and small battery

By the time you make it a convertible (better than a clamshell) and add a battery you’ve built a Chomebook that costs the same. Seems to me like these devices need to cost $150 for the touch version to have a good niche in the market. I don’t know if you can build one for that price. At $300+ you might as well buy a Chromebook and tether. With a Chromebook you get a well supported UI and operating environment.

Already at $280 you can buy a convertible chromebook (e.g. lenovo 300e, asus flip c101pa) with a nice IPS touch screen — I can vouch for the screens of the asus flip and the last-year model n23 lenovo.

You can find such devices on Amazon for reasonable price. Main difference is USB-C connection. Maybe size and thickness are advantage too. Anyway, we can buy portable display for about 150$ today. Where is the invention here?

Watch the video and think about sitting on the sofa and using this as an ebook reader connected to your smartphone or the likes. With a conventional portable display you have at least 2-3 cables dangling about… With a USB-C you have just the one.

Throw-in headphones a mouse and keyboard and you get why it’s called portable office: One cable instead of 4-5 is the difference between using it or not.

The main thing is the weight. You don’t have to think twice carrying multiple displays in your bag / suitcase. Other similar products are much heavier and thicker. The non-touch version is barely heavier than my phone.

“I don’t think I’ll be willing to work with a display lying flat on a table, as it seems uncomfortable”

Now imagine you have printed a some documentation, how will you read/handle those papers? ^_^

But, i think lamp reflections might become an issue with any screen laying flat on a table.

OK, good point 🙂 But I don’t usually have a laptop or keyboard in the way when I read a document. I suppose I could always push away the keyboard though, or place the screen on top since it’s so light.

It’s a 16:9 screen “with Full HD resolution”, so it’s a useless crap that is only useful for watching movies.
A good screen for work related purposes it at least 16:10 ratio.
Also “”with Full HD resolution” means zero, because “Full HD”, just like 1080p, is a TV “standard” and this is not a tv, so that expression has no meaning here.
I think what you mean is 1920×1080 resolution.