Motorola Lapdock may have been ahead of its time, as laptop docks for smartphone are back in vogue with products like NexDock, and Apple could soon launch their own iPhone laptop dock. Another option is Miraxess Mirabook laptop dock with a 13.3″ display, and a battery lasting up to 24 hours, that works for smartphones, development boards, and HDMI TV sticks thanks to its USB type C port. 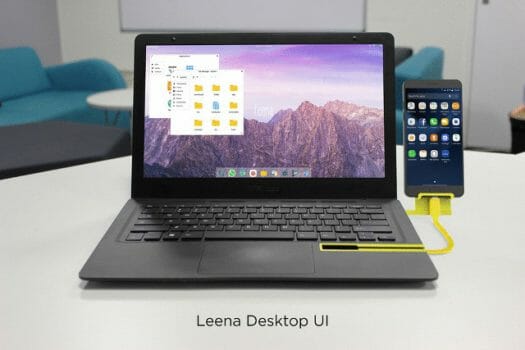 The solution relies on SlimPort to provide video & audio over USB as it works for many products, and does not require as much (CPU) resources as DisplayLink. The latter will however be considered as a stretch goal if the campaign raises over $300,000. 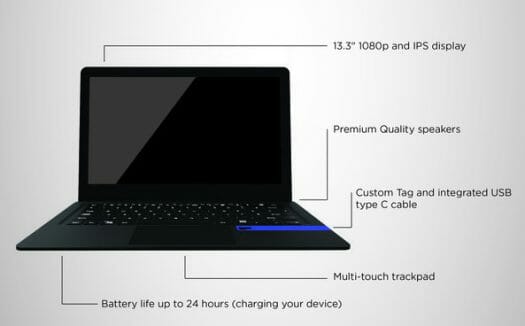 The company explains that “convergence” operating systems such as Windows Continuum, Samsung DeX, Auxens Oxi OS, or Remix Singularity, are particularly well suited for the Mirabook, as they provide a desktop experience when the phone is connected to a larger display. They also mentioned Leena OS which I had not come across before, and works on any Android 4.2 or greater smartphone with a free version supporting multi-window, web apps, and a browser, and a Pro version  adding some extra features like a native PDF reader, and the possibly to put icons on the desktop.

The project has launched on Indiegogo with Miraxess aiming to raise at least $50,000. A $180 Early bird pledge should get you a Mirabook, while the retail price after the Indiegogo campaign is expected to be $299. Shipping will add around $15, and delivery is scheduled for December 2017.

I wonder how this compares with the Andromium Superbook?
http://www.cnx-software.com/2016/07/22/superbook-turns-your-android-smartphone-in-to-a-laptop-for-99-crowdfunding/

I note that the superbook also offered a 1080p option when they got enough funding.
https://www.kickstarter.com/projects/andromium/the-superbook-turn-your-smartphone-into-a-laptop-f

@Paul M
11.6″ vs 13.3″ display.
Mirabook also includes speakers, HDMI output, audio jack, SD card slot, and USB host ports.
Mirabook battery appears to be larger too (8 hours vs 24 hours), but that claims may vary a lot, and it’s add that Mirabook weight is almost the same as Superbook (1.0kg vs 0.9 kg).

@Jean-Luc Aufranc (CNXSoft) “Superbook does not have speakers. As a fairly inexpensive product, ($99 during the Kickstarter, $129 now) any speaker we could affordably source would be way worse than your smartphone Since many backers have $300+ smartphones, and your smartphone is right next to your Superbook, we thought the tradeoff between having a set of mediocre speakers vs not paying for extra speakers was worth it for generation 1, not to mention it made the product easier to build That being said, we’ll likely include something in the 2nd generation product” From slack.com official respond from Sentio/Andromium Someone replied… Read more »

As someone who picked up a new old stock Motorola Lapdock for 50 EUR, I can see the value of these things. It’s perfect to connect to a PC when I need a display and don’t want to mess with dragging a monitor/keyboard/mouse along with me. It’s also great for SBCs. But really, I’m not willing to pay much more than $100 for it. Especially if it only includes a 720p display. @Paul M: The superbook is *still* in pre-order mode. Despite their Kickstarter proclaiming delivery in “Jan 2017” for most models. Their website is also accepting pre-orders for $129… Read more »

What it is for?????? We have USB-C type connector. We can buy USB-C touchscreen handy monitor in many factories in china, and that is all. Lucky guys from them 2mln usd !!!