Micropython is a lightweight implementation of Python for microcontroller which we covered first in 2013. The port is supported by various hardware platforms, and I even tested Micropython on ESP32 a little while ago, but the developer – Damien George – also launched officially supported boards starting with Pyboard in 2014 with an STM32F4 microcontroller.

At FOSDEM 2019, the upcoming Pyboard D-series (aka Pyboard D, or just PyBD) board was introduced during the Micropython presentation with a faster STM32F7 Cortex-M7 MCU, as well as built-in WiFi and Bluetooth connectivity. 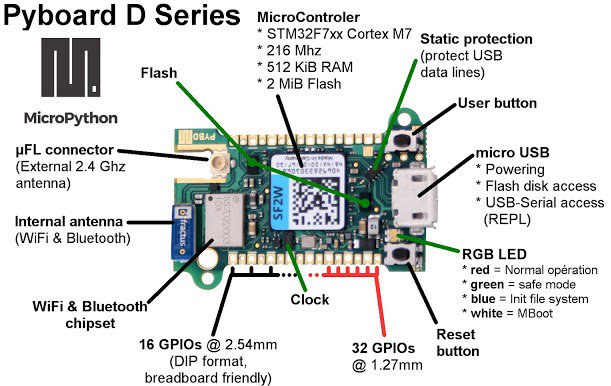 The board can be programmed with MicroPython either from the command line, copying the Python file to the board (seen as a USB flash drive from your computer), or via WiFi using WebREPL terminal client.

The WBUS connectors are also new and will allow you to stack add-ons boards, for example the WBUS DIP28 or DIP68 boards exposing respectively 28 and 68 I/O pins, and which themselves can takes one or more sensor board(s) via other smaller 2x 10-pin sensor board connectors.

There’s also an eMMC WBUS board for extra storage, and I’m sure more WBUS boards may be planned. You’ll find more details on MCHobby’s blog post (in French).

There were a few samples on offer at FOSDEM 2019, but the only pricing and availability information I know of is that the board will be available in a few days or weeks.

Probably way more expensive then an ESP32 🙂 My Wemos Lolin32 came preflashed with micropython for 4eur. But now it seems they stopped them…

If you have to ask for the price, you probably won’t like the answer.

“Modules” are everywhere nowadays. Great for hobbyists but they often disappear just as fast as they pop up. This makes them unsuitable for any serious production project.

Is the gap/hole next to the uFL connector a slot to solder a SMA connector?

I like many of this board’s features. If it is priced right ($20-30 for the board) it will do well. And no it is not going to compete with $5USD ESP32 boards but it doesn’t have to. Plenty of people will be willing to pay a premium for ease of use, good documentation and well thought out hardware dedigns. I’ll prolly buy a couple even if its a bit more expensive that $30.

For $25 you can get the pocketbeagle that can run actual python. I’m not sure I see the point of hobbling yourself with a microcontroller unless it’s much cheaper.

When I think ease of use I do not think PocketBeagle. PocketBeagle does not have ready made Python3 libraries for accessing its interfaces. Also you have to mess around with loading device tree fragments e.t.c. …Very ugly. Python3 is not optimized for embedded system and will lag in comparison to Micropython, even with a 1GHz clock. Also Linux is not realtime and is not ideal for every type of embedded project. This is why projects like openMV use Micropython. With your logic, I can get a RPi Zero for $11 bucks, a RPi Zero 3 for $35 and a nanoPi… Read more »

>PocketBeagle. PocketBeagle does not have ready made Python3 libraries for accessing its interfaces. GPIO, ADCs etc are all available as files in sysfs. >Python3 is not optimized for embedded system and will lag in comparison to >Micropython, even with a 1GHz clock. I’d like to see evidence for that. Either way if you had a performance critical area you can use tools like cython. If anything you have more choice because people have been trying to make normal python fast for a long time already. >Also Linux is not realtime and is not ideal for every type of embedded project.… Read more »

– PocketBeagle is not easy to use. For starters you need to worry about loading device tree blobs to get the desired correct IO configuration. (Admittedly this has become easier to do in the last 3-4 years but is still hard for non-techies or those not familiar with Linux) – Accessing IO through sysfs is slow as molasses in any language. Micropython on a microcontroller has properly developed C drivers wrapped in python code giving it faster access to IO resources. – The two PRUs in the PocketBeagle SOC are NOT easy to use. They were intended to be programmed… Read more »

>For starters you need to worry about loading device tree blobs to >get the desired correct IO configuration How is that different from working out the pin mux settings on a microcontroller. The BB kernel has their pinmux helper etc. >Micropython on a microcontroller has properly developed C drivers wrapped >in python code giving it faster access to IO resources. So the IIO subsystem in Linux isn’t properly developed C drivers? >The two PRUs in the PocketBeagle SOC are NOT easy to use. Doing stuff that requires hard realtime isn’t easy either. They are there if you need to do… Read more »

Oh and the pocketbeagle doesn’t have built-in network connectivity at all.

You can install MicroPython on Linux and do some benchmarks for us?
For true hard real-time you need to use an RTOS or RTAI + Linux, else it’s not hard real-time!!! Don’t be fooled.
Current break out boards are too big and this form factor is next evolution.
MicroPython gives people option to use Python from a micro to cloud – faster dev to market.

Just the wifi module is $8…