Circumference offers an other option with either 8 or 32 Raspberry Pi 3 (B+) boards managed by UDOO x86 board acting as a dedicated front-end processor (FEP) that’s designed as a “Datacenter-in-a-Box”. 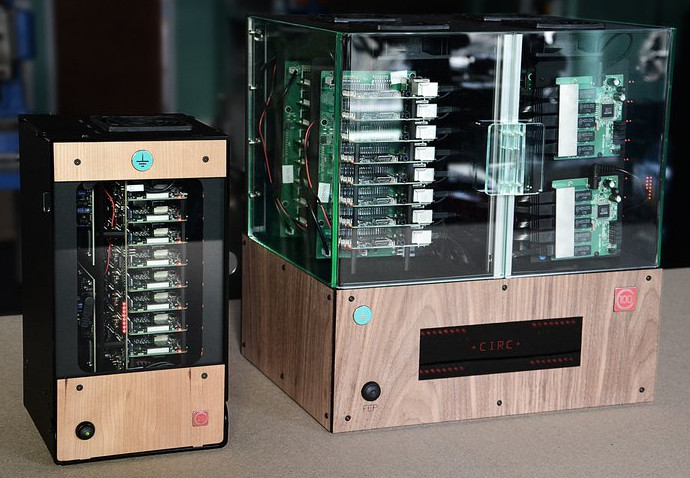 The firmware for the backplane has been developed with the Arduino IDE and Wiring C libraries, and as such will be “hackable” by the user once the source code is released. The same can be said for the front panel board used in C100 model and equipped with a Microchip ATmega328 MCU.

The UDOO x86 Ultra board runs a Linux distribution – which appears to be Ubuntu – and supports  cluster control out of the out-of-the-box thanks to a daemon and a command line utility (CLI), as well as Python and MQTT APIs.

Hardware design files, firmware, and software source code will be made available after the hardware for the main pledge levels have been shipped. 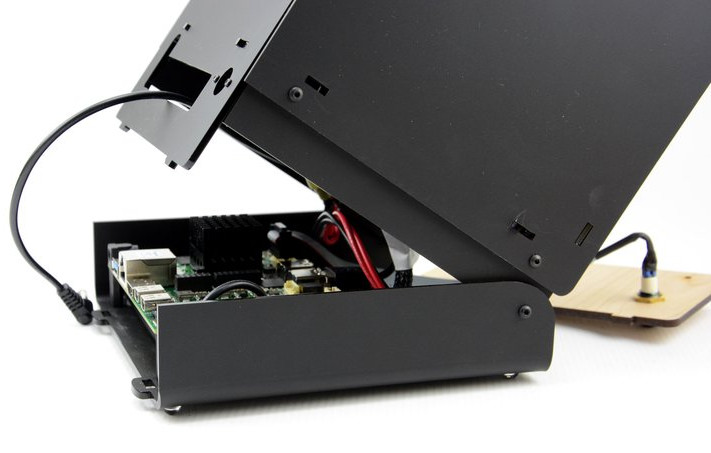 Circumference C25 and C100 are offered as kits with the following:

What you don’t get are the Raspberry Pi 3 (B+) and UDOO x86 (Ultra) boards, SSD and/or micro-SD cards, and power supply, which you need to purchase separately. That’s probably means you could also replace RPI 3 boards, by other mechanically and electrically compatible boards such Rock64 or Renegade boards, or even mix them up (TBC).

The solution can be used for cloud, HPC, and distributed systems development, as well as testing, and education.

The project has just launched on Crowdsupply aiming to raise $40,000 for mass production. Rewards start at $549 for the C25 (8+1) model, and $2,599 for the C1000 (32+1) model with an optional $80 120W power supply for the C25 model only, but as just mentioned without the Raspberry Pi and UDOO boards.  Shipping is free worldwide and planned for the end of January 2019, except for more expensive early access pledges which are scheduled for the end of November.

The design is so freaking cool, the 32x Pi model looks like a 1965 DEC PDP-8.
Really nice project.

What’s the purpose of the fans?

Just as a reference: for anyone interested in SBC clusters a design that takes care of sufficient heat dissipation (unlike the above designs) is mandatory since why would anyone want throttling? Here is a nice example also making use of custom powering backplanes and allowing for efficiently cooling the individual boards due to proper orientation and position of the fans: http://forum.khadas.com/t/vim2-based-crypto-currency-miner-build/ And of course for a low count cluster using something like Pine’s Clusterboard with a couple of SoPine modules is a way better approach than cramping normal SBCs with a bunch of Ethernet switches and cables in a box.… Read more »

Good point on the thermal.
I was also wondering how reliable such a setup would be.

> I was also wondering how reliable such a setup would be The primary OS on those Raspberries (a RTOS called ThreadX) implements throttling on its own starting at 80°C. Of course the secondary OS (Linux for example) won’t know and while the boards (especially those in the middle of such a stack) in reality are throttled down to e.g. 800 MHz due to overheating the kernel will still happily report 1200 MHz or even 1400 MHz on the Pi 3+ (RPi cheating as usual). The first line only returns bogus values while only the 2nd call provides the real… Read more »

My concern was also wrt reliability of the nodes.
I’m not sure if the setup allows for netboot or local storage.
My experience with SD cards over time is not that good.

> I’m not sure if the setup allows for netboot or local storage. Both. The RPi SoC allows for some sort of proprietary netbooting in the meantime. But even with local storage on SD card there’s nothing to worry as long as you keep the ‘flash memory’ challenges in mind: 1) Always be aware that there’s fake/counterfeit crap around faking a higher capacity than the real one so cards need to be tested prior to usage (since otherwise it’s game over once the amount of data written exceeds the real capacity — such counterfeit cards die over thousand times faster… Read more »

While I find that it *looks* nice, I’m really shocked anyone can think about using an inefficient RPi to build a cluster. You build clusters because you need performance, not for community support. In this design, the x86 board controlling the cluster might have almost as much power as all the RPis together (OK I’m exagerating a bit though not that much when they start to throttle, but you get it). There are a lot of alternative boards around for various purposes. The NanoPI-Fire3 provides 8*1.4 GHz A53. Stronger per-core performance can be obtained using RK3288 as found in MiQi… Read more »

They don’t sell the boards with the kit, so it should be easy enough to use Tinker boards instead of Raspberry Pi 3 boards.

Those RK3288 boards like Tinkerboard or MiQi suffer even more from the broken thermal design of these cluster boxes here. They need efficient heat dissipation to not throttle down to a minimum which is impossible with this box (only the board at the stack’s top receives appropriate cooling, the 7 below not) Which is fascinating since the guys behind the project (Ground Electronics) know how to do it correctly (maximum airflow over the boards/heatsinks with a fan blowing laterally): https://groundelectronics.com/products/parallella-cluster-kit/ But maybe it’s really all about the target audience? If people want to build a cluster out of RPi they… Read more »

> only the board at the stack’s top receives appropriate cooling, the 7 below not

I didn’t notice when I first saw the photos, you’re absolutely right, what an horror! So it’s just a noise generator.

> You build clusters because you need performance, not for community support.

They claim such a physical cluster setup would be great for educational purposes. I do not agree that much since Datacentre-in-a-laptop is IMO the better idea if you want to learn clustering and be mobile at the same time. My latest laptop has 16 GB DRAM which allows for 20 virtual servers easily.

https://www.crowdsupply.com/ground-electronics/circumference/updates/a-gnu-parallel-clustering-demo Unbelievable. They really only care about the most inefficient SBC possible for cluster use cases (Raspberries). A cluster job when running on 8 nodes being just 3.72 faster compared to a single node is really ‘impressive’. They even explain why using Raspberries for this is such a crappy idea: ‘This overhead eats into the potential performance gain – as does the 100 Mb/s network port of the Raspberry Pi 3 Model B, which can be improved by a rough factor of three by switching the nodes to use the newer and faster Raspberry Pi 3 Model B+ with its… Read more »

This a ridiculous for the price considering you still have to purchase the boards and other components. Good luck.