The company has now introduced a limited edition of the device with One Mix 2S Yoga  Platinum featuring the most powerful Amber Lake processor so far: the Intel Core i7-8500Y dual core / four thread processor also with a 5W power budget. 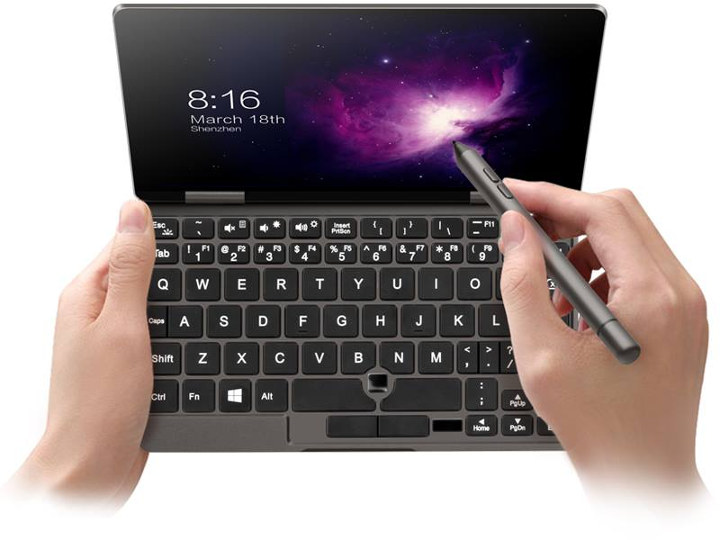 Beside the upgraded processor, you’d also get 512GB SSD storage instead of just 256GB SSD for the original model. One Mix 2S Yoga Platinum comes with Windows 10 Home 64-bit Home, and ships with a charger, and an English user manual. An optional 2048-level stylus is also offered.

This mini laptop would cost you $1,199.99 shipped however, and this can’t really be justified by the extra CPU performance, as Intel Core i7-8500Y is basically the same as Intel Core M3-8100Y except for slightly higher base and turbo frequencies. It may make sense if you really need to extra storage, or for bragging rights. For reference, you’ll find One Mix 2S Yoga laptop with Core M3-8100Y processor and 256 GB storage for $669.99 on the same GeekBuying page.

It’s amazing, the price of a mid-range professional PC with the performance of an Atom and the usability of a smartphone. I doubt it will find a public considering that there isn’t even any apple-like logo on it to justify the extra thousand dollar.

It is a good question, who are the customers, what’s the market and what means they need this form factor, hardware for their job?

No one needs it.

The CPU is right in the uncanny valley between a dumb terminal/typewriter and a development box. You can’t really play games on it and it’s not even about the performance, but you kinda need a mouse, better, with a keyboard and, even better, with a display. You can’t type properly, as there’s no palmrest and the layout is weird and you kinda need a 9-10″-sized keyboard to type somewhat efficiently. And there’s no support, the drivers are stored on dropbox and goodix touchscreen drivers are from 2015 and get flagged by at least Symantec.

I look at my Mix 2. It’s a bit scratched and dirty from traveling in the back pocket of my jeans, in my coat or in my backpack full of other things. I see I somehow learned to type using my thumbs, while holding the laptop in both hands. I observe a number of dev suites and sdks from old projects I probably need to clean up. I even have some games installed. Obviously I use it a lot, but I can’t quite exactly point out, for what.

I perfectly understand this use case. It’s the same I have with my netbook (asus eeepc 1025C). I can bring in anywhere “in case I’d need it”. I don’t even care if I break it. I could possibly be interested in something smaller that fits into any pocket, like such a device, but for 250 EUR, not 1200. Ah, and not with a glossy screen you can’t read outdoors 🙂

One Mix 2 is about 600 EUR which is still a bit too high to my liking (though I bought it anyway), but on par with comparable 7″ laptops (I don’t count GPD Pocket 2 version with a dual-core Celeron as comparable).

So yeah, the price of Mix 2 with 7y30/8100y is, unfortunately, in line with the current market conditions. With 8500y it’s completely out there.

Definitely above the performance of an atom though, bit sure where that claim comes from?

This is comparing older models, but still gives a tough picture http://cpuboss.com/cpus/Intel-Core-M3-6Y30-vs-Intel-Atom-x7-x7-Z8700

I agree this model is a bit overpriced, but I’m very happy using the model with the 8100y as my main work computer on Linux. Unfortunately, the pen isn’t supported, but otherwise it works fine for me. Obviously using it on a dock in the office, but when traveling I can just pack it in my bag with just 500g extra weight and hardly any bulk.
Of course, it won’t work for everyone, but this condescension is a bit over the top.

As you found, this comparison is old and considers a quad-core CPU vs a two-core atom. Here it’s the opposite, this CPU is 2-core only while most atoms are quad-core and can sustain mostly decent frequencies. I’m not saying that Atoms are fast, just that I’m having a hard time imagining getting anything significantly better from this one.And yes, probably that it perfectly fits your use case, but how many people are there willing to spend that much money and lose a decent keyboard just to save a few centimeters compared to a small and cheap netbook ?

Compared to four-core Cherry Trail Atoms, yeah, you’re getting something overwhelmingly better. Kaby/Amber Lake Y cores are more than twice more performant in single-core at the same base clock and TDP and hyperthreading allows them to maintain a huge lead in multicore as well.

Now, compared to modern Goldmont Plus of the same Bonnell lineage as Atoms, yes, a quad-core Celeron like N4100 will successfully trade blows with 7y30/8100y, as twice more real cores compete with a 20-25% single-core advantage quite well.

Theoretically, 8500y as a better-binned m3-7y30 can provide small, but noticeable (like 30-40 minutes) improvement of battery life.
Also in some exceedingly rare circumstances 8500y’s support of TXT may be important (though I can’t figure out how a TPM module from a third-echelon Chinese manufacturer can be trusted).
Oh, and, I guess, you can have 15-17% better fps if you’re into multiplying very small numbers.

Other than that, it looks like the same Mix 2 as usual, with buttons touching the touchscreen when the lid’s closed and with drivers conveniently stored at dropbox.