Olimex works on open source hardware boards, while the FreedomBox Foundation has been developing FreedomBox, a free and open source private server system, since 2010 with the goal of empowering regular people to host their own internet services, like a VPN, a personal website, file sharing, encrypted messengers, a VoIP server, a metasearch engine, and more.

When you mix open source hardware, open source software, and a bit of Internet freedom it gives birth to a product called “Pioneer Edition FreedomBox Home Server” based on Olimex A20-OLinuXino-LIME2 board and running FreedomBox software. 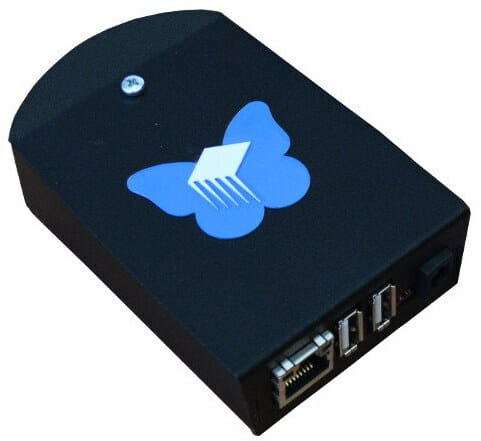 The board ships with an enclosure, a one meter Ethernet cable, a power supply together with optional plug adapter for US or UK.

FreedomBox has already been deployed to several locations, including recently in India using donated old computers to bring Internet connectivity to villages. A single board computer solution may cost less overtime due to electricity usage. Beside the LIME2, Freedombox also runs on various other hardware platforms including BeagleBone Black and the Raspberry Pi boards.

However, if you can purchase Pioneer Edition FreedomBox Home Server, it also sponsors the project. You can do so on Olimex store for 82 Euros.

I’m wondering what throughput one can get with VPN (as a client device).
Also it would be nice if it came with two network interfaces, one for internal, one for external.
Now one either needs to use an USB dongle or connect it to the internal network. I’d rather have things like VPN on the outer edge of my network

Kudos to Olimex for making something like this and supporting the devs, but yah, this board has a lot of shortcomings and is overpriced. There are no crypto extensions so I am guessing the vpn will struggle. The best bet would an espressobin: http://espressobin.net/

I don’t know much about FreedomBox but it seems like there isn’t a whole lot of activity in regards to this project. Their latest release is from 2017 and their recommended hardware list features mostly a bunch of old boards with 100 Mbs ethernet.

At least something happens (again): https://ftp.freedombox.org/pub/freedombox/logs/

Just learned that Freedombox is deeply integrated into Debian: https://wiki.debian.org/FreedomBox/Hardware/Debian

It seems all ‘the magic’ happens in some scripts/services contained in Debian’s freedombox-setup package. As such it should run on all hardware for which Debian Stretch (or Buster soon) is available.

According to the reviews for the EspressoBin in enclosure on Amazon, the box runs very hot and also that the software implementation is not that great.

Have you had better experience that that?