We already knew Qualcomm had given up on their Centriq processor since mid June 2018, but earlier this year, it seemed the solution had found a new life with HuaXinTong StarDragon 4800 Server SoC born out of a joint venture between Qualcomm and Guizhou provincial government.

The processor was allegedly a customized version of the original Centriq 2460 48-core Arm SoC. 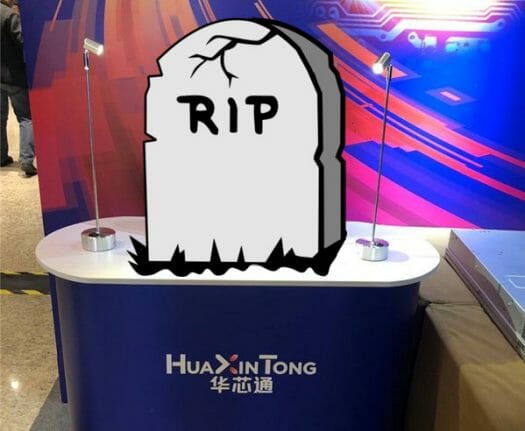 But recent reports point out that 10 employees from HuaXinTong Semiconductor (aka HXT) have claimed the joint venture is closing down with executives at the company said the venture would shut down by April 30 in an internal meeting. HXT representatives declined to comment on the rumor.

The Arm server market is really brutal. Qualcomm and Guizhou government had invested a combined $570 million in HXT as of August 2018 according to company’s fillings. Broadcom and AMD gave up one Arm server chips a little while ago. AFAIK, this leaves us with three Arm server SoC companies: Ampere Computing born out of Applied Micro technology which was acquired by MACOM previously, Marvell with its ThunderX/X2 SoCs purchased from  Cavium, and Huawei with its Kunpeng 920 64-core Armv8 server processor.

What about NXP? I thought that the CPU from SolidRun’s upcoming ClearFog ITX board is server hardware – https://www.cnx-software.com/2019/03/29/clearfog-itx-workstation-ultimate-arm-developer-platform/

I think there’s a difference between server SoC and networking SoC (like the NXP one). They share many of the same interfaces, but I understand the networking SoCs are optimized to push and distribute packets around.

Broadcom didn’t give up their design, they sold it to cavium. Essentially AMD and QCOM are the only two vendors who did nothing with their server designs.

ps: QCOM’s story is more convoluted, but let’s say they did, for the sake of simplicity.

>Broadcom didn’t give up their design, they sold it to cavium

Because they gave up on it presumably. They probably lost money in the sale.

If Avago (who acquired Broadcom and subsequently sold the project) lost money in the sale that would be their own fault. The current owner of Vulcan — Marvell, seems to be doing fine selling those.

>The current owner of Vulcan — Marvell, seems to be doing fine selling those. All the earnings calls from Marvell since they acquired it state they are spending tons of money on it, that it’s an “investment area” and that they have some traction in the tiny HPC market but no sales numbers. If they were selling by the bucket full they would be bragging about it to their investors. Unless they have something special that all of the others don’t they’ll be going down the exact same path: Trying to beat commodity x86 hardware decades too late, scrambling for… Read more »

What’s the chip inside Amazon’s ARM server?
The Graviton.
Who makes that?

Amazon makes their own chip. Just like Apple does.