We’ve seen several Armv8 processors for the datacenter launched in recent years from companies like Cavium – now part of Marvell – and Ampere. Another company now joins the fray with Huawei having just introduced their Kunpeng 920 64-core Armv8 processor manufactured with a 7nm process, and offering 8-channel DDR4 RAM, and fast interfaces such as 10GbE and PCIe 4.0. 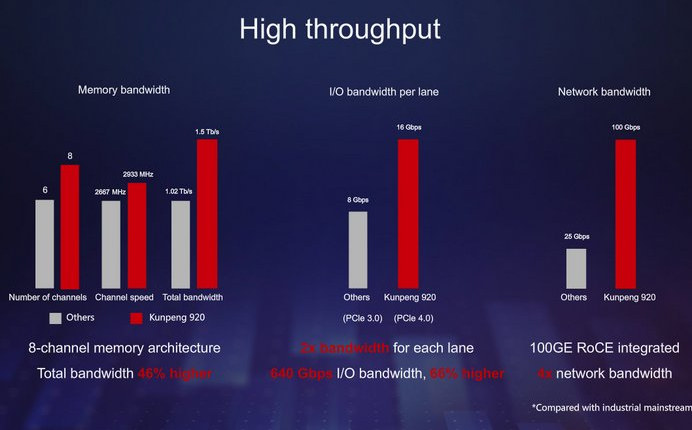 The company customized their ARMv8 cores in order to improve performance by optimizing branch prediction algorithms, increasing the number of OP units, and improving the memory subsystem architecture. Beside the 25% performance improvment, Kunpeng 920 is also 30% more efficient compared to competitors.

The company also announced three new TaiShan series servers based on Kunpeng 920: one focusing on storage, the other on high density, and the latest on balancing both requirements. The servers are designed for big data, distributed storage, and Arm-native application scenarios.

No. Cortex-A76 cores @2.6GHz should be faster in SPECint.

Given that Kunpeng 920 is just the top SKU of Hi1620 (https://www.anandtech.com/show/13620/huawei-server-efforts-hi1620-and-arms-big-server-core-ares), how would you describe ‘Ares’ uarch in Cortex terms?

AFAIK, “Ares” is another uarch. Cortex-A76 based on “Enyo” codenamed uarch.

Given that Ares is neither CA72 nor CA75, as they are both ‘cosmos’ in neoverse terms, what you’re saying is that arm have yet *another* big (server-suited) uarch that is neither CA72-based, nor CA75-based, nor CA76-based. I find this highly unlikely, and I’m with anandtech on this (https://www.anandtech.com/show/13614/arm-delivers-on-cortex-a76-promises):

‘We’ve just recently seen Arm’s new server core in the wild – Ares should be the infrastructure counterpart to Enyo/A76 and part of the recently announced Neoverse family of CPU cores. It’s not hard to imagine 32 or 64 of cores of this calibre on a single chip. Overall, we’re looking forward to more exciting products in the next several months – both in the mobile and infrastructure spaces.’

It seems you misunderstood me. (Sorry for my bad English).
IMO, “Ares” is a development of the “Maya” microarchitecture (uarch of Cortex-A72), just another branch.

“- High-end servers and large tablets – Cortex A72 (16nm FF+) will be supplanted by Ares core optimized for 10 nm FinFET process”.

I don’t think we have good evidence indicating Ares is CA72:

1. Arm’s own neoverse roadmap shows that both CA72 and CA75 are not Ares — they are part of the Cosmos generation. Ares comes after Cosmos (https://www.anandtech.com/show/13475/arm-announces-neoverse-infrastructure-ip-branding-future-roadmap).
2. That old roadmap from 2015 shows that Ares comes after CA72 — it does not suggest that Ares is CA72-based
3. We know that CA76 is the successor to CA72 by the same Austin, Texas design team: https://www.anandtech.com/show/12785/arm-cortex-a76-cpu-unveiled-7nm-powerhouse

From there on, why would a 2019 7nm server part be CA72-based, when there is a big 2019 cortex design targeting 7nm? Not to mention that while CA73 is not suitable for servers, CA75 was suitable for server designs (as demonstrated on the neoverse roadmap), and if Ares was to be based on an older uarch that would’ve been CA75. But I don’t think it is.

Whoever runs their “marketing video” department needs to be fired…
Surprised they can get all of that hardware into a QFN64. 😀

Now this is getting very interesting, I’m impatient to see how competition reacts. Maybe Marvell will announce the 8080/8160 or stuff like this, or a new kid in the ThunderX family ? I can already imagine haproxy users asking when we’ll support more than 64 threads to have fun with such a beast 😉

Yes but I never found any sign of its existence. They tend to keep their chips secret until a product is released using them, so that might well be the case here. I also suspect that thanks to their MoChi design they can decide to build the new chips only once there is compelling demand from a large customer: they just have to assemble small dies together, and place a cover on top, which is a really great design!

A lot of their stuff never leaves their extranet.

They seem to have a tool that takes IP blocks and where they are mapped and then spits out most of an SDK for it going by some of their SDKs. I wouldn’t be surprised if it generated all the interconnect stuff for actual chips too.

No it is available on the net and a lot about this chip too, you just look in the wrong places, or don’t get invites. There are several detailed PDF available to study.

Looks like the Intel domination is slowly coming to an end. Interesting chip though.

>Looks like the Intel domination is slowly coming to an end.

You can actually go and buy a 64 core intel system from SuperMicro today if you have the money.
You can’t even find pricing for these.

Is this the same Huawei which

(iv) which cybersecurity experts have warned the UKofGBandNI government poses a threat to the security of UK telecom networks and described its lack of progress on addressing security concerns as “disappointing.”

Those who buy and use Huawei products must regard all of the above warning as alternative facts or fake news.

Or they might have threat models that differ from those of nation-states. You know, whichever!

They could also check the source for this campaign: https://www.nzherald.co.nz/business/news/article.cfm?c_id=3&objectid=12165136 (I used a source from New Zealand to complete the Five Eyes picture you’ve drawn)

The Czech Republic is not part of Five Eyes.

And neither is Poland.

Poland has arrested a Chinese employee of Huawei and a Polish national involved in cyber-business on allegations of spying, Polish state media has reported, deepening the controversy over western criticism of the Chinese telecoms company.

Poland calls for ‘joint’ EU-Nato stance on Huawei after spying arrest
Poland’s internal affairs minister has called for the EU and Nato to take a “joint stance” on Huawei after an employee of the Chinese telecommunications equipment maker was arrested on spying charges.

It stretches credulity to believe that all of these governments are Trump’s puppets in his US-PRC trade war, when he cannot even keep his own government fully funded and operational.

What’s the difference between Huawei and Ericsson, ZTE and Nokia Siemens Networks? They all enable governments implementing surveillance of the whole population. This is from 2012 (pre-Snowden): https://www.reuters.com/article/us-iran-telecoms/special-report-chinese-firm-helps-iran-spy-on-citizens-idUSBRE82L0B820120322 (and we only get press coverage since the affected country is called a ‘rogue regime’ in the west).

But it’s about server CPUs here and not Telco provider equipment. And backdoors are of course an issue. But it really doesn’t matter whether they’re designed to be exploited by the NSA, GCHQ or 中華人民共和國國家安全部 / 中华人民共和国国家安全部.

When you can’t beat them technologically, slander them. The reason a good part of the world is using Huawei telecom tech is not because it’s proven to ‘not spy on their citizens’, it’s because it’s spying on their citizens just as much as the next equipment provider, but does that at half the price : )

Half the price, from country that demands tech secrets from companies selling there.

…is still something different than server parts. I guess one of the reasons the Chinese develop own tech here is they’re tired of having to rely on foreign tech parts with backdoors inside (at least some call the Intel Management Engine living in every Intel CPU for over a decade now as something like this and we all should know about the existence of NSA ‘upgrade’ factories).

For me personally it doesn’t matter that much whether there are US or Chinese backdoors inside since I don’t like having backdoors at all. And if I would be concerned especially about Chinese implants/backdoors then chances to avoid them might be rather limited anyway (see the Bloomberg story about ‘Chinese spying implants’ on SuperMicro mainboards).

more taiwan good stuff, Trumpet is over. Shame on you Trumpet, shame on you 🙂