The former was a good place to get started, but the Arm Cortex-A53 cores clicked at 1GHz provided limited performance, and the GIGAGYTE workstation costs over $12,000, so it’s only suitable for projects with specific needs and/or a high expected return on investment. That’s why there will be a discussion about Designing a next generation ARM Developer Platform at Linaro Connect 2019 next week in Bangkok, Thailand.

But courtesy of SolidRun, there may already be a board in the work that would make an excellent base for an Arm development platform providing better performance than the Developer Box, at a price point that should be more acceptable. Meet ClearFog ITX motherboard.

The board will support Linux Kernel 4.14x, as well as mainline Linux. Some people are asking for an SBSA compliant Arm developer platform, and SolidRun CEx7 LX2160A COM Express module might fit the bill as the press release mentions SBSA in the list of features. 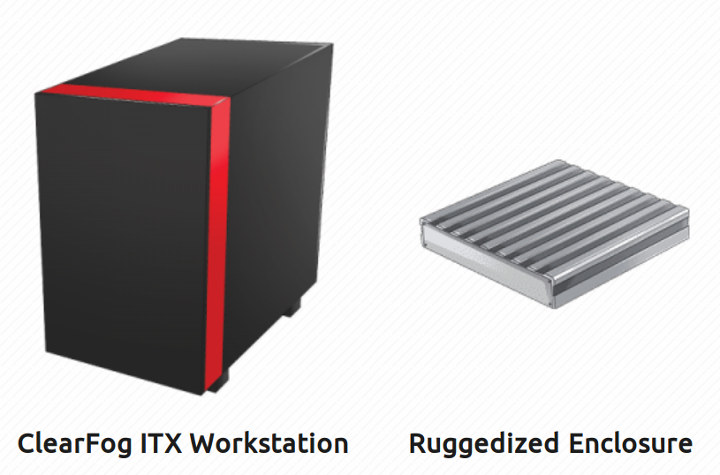 Since ClearFog ITX motherboard follows mini-ITX standard, you should be able to use any mini-ITX chassis, add a PCIe x8 graphics card, memory module, storage and you should be good to go. However to make things easier, the company will also offer a fanned ruggedized metal enclosure, and a complete ClearFog ITX workstation based on the mini-ITX board. The more compact metal enclosure could not be used as a standalone Arm development platform due to the lack of video output, but it could be used as a shared development server, where developers login from their main machine to run builds or other tasks.

The product page about the ClearFog ITX board does not provide pricing and availability information, and only features renders of the board and enclosures, so it may take a little while until the solution becomes available. A complete Arm machine with the board, case, graphics, memory, and storage, would hopefully only cost a few thousand dollars. For reference, NXP’s own QorIQ LX2160A Reference Design Board sells for around $4,000, but hopefully SolidRun solution will be available for a bit less. [Update: Pricing for the board is expected to be around $500. see comments section for more details about pricing]