Rockchip had their annual event yesterday offering a view of past achievements, as well as a glimpse into the future with new products announcements. The company is ready to go to the next level with their Rockchip RK3588 featuring Cortex-A76 and Cortex-A55 cores, 8K video decoding support, 4K user interface support, an NPU 2.0 (Neural Processing Unit) manufactured using an 8nm LP process. 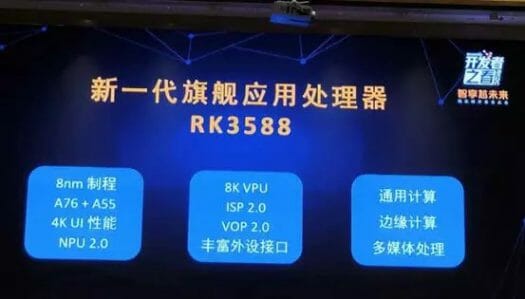 The processor should have eight cores in a 4+4 dynamIQ configuration according to a tip from “coldfish”, and the new 8nm process is expected to increase performance by 20 to 30 percent, while the power consumption will be reduced by 40 percent. Mass production is expected for Q1 2020. 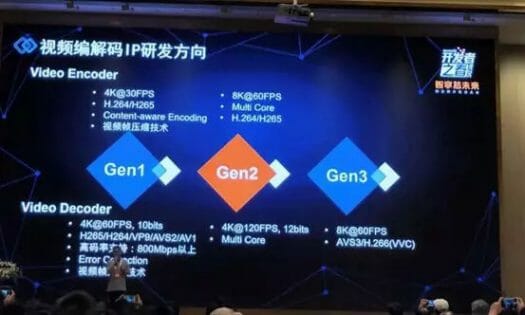 The company also showed a slide with their video encoder/decoder IP, and Gen3 should be in RK3588 since that’s the only one with an 8K 60 fps decoder using either AVS3 or H.266 (VVC). I’m quite confused with the Gen1 decoder since it shows AV1 implementation too, and as such should be new as well. An 8K 60 fps video encoder is also in the works. 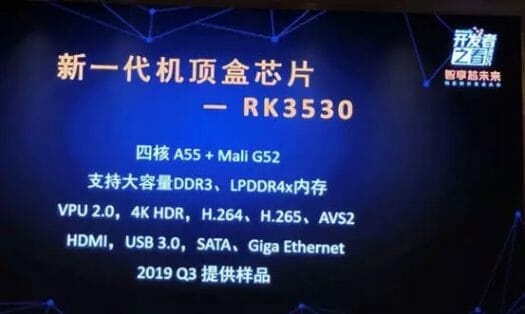 While RK3588 was clearly the highlight of the show, it was not the only worthwhile addition to Rockchip SoC portfolio, as RK3530 quad-core Cortex-A55 processor with a Mali-G52 GPU, 4K HDR, USB 3.0, SATA, and Gigabit Ethernet is planned for Q3 2019.

Other notable announcements included RK2108 Arm Cortex-M4 audio chip, and RV1109 dual core 4K H.264/H.265 camera SoC with NPU 2.0 A.I accelerator which are also planned for the second half of this year. 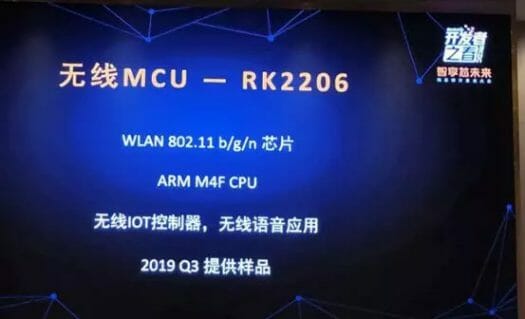 A few more details and slides can be found in that article in Chinese.

The RK3530 looks really interesting, hopefully it’ll be part of their “open source” parts.
It’s missing PCIe, but could still be a pretty good general purpose SoC, as long as they don’t go and mux things like SATA and USB 3.0.

It would give the Amlogic S905X3 some competition.

As @TLS said: let’s hope RK3530 gets Linux support, SATA is not muxed with USB and not as crappy as ‘Allwinner SATA’. On the other hand I’m not entirely sure whether I want to either deal with the usual kernel/driver hassles on ARM or wait until 2023 to use a potential RK3530 mini NAS/server.

I was thinking exactly the same. Maybe the A55 will finally replace A53 in field.

If anyone knows more about the video decoder support, I’d love to see that clarified.

I have the feeling this thing will go into Chromebooks.

You wait till it is made, then you have to wait till it has usable software support. By which time the next must have chip is on the horizon.
Cycle of SoC life for some.

It should. RK won’t leave that market to MT just like that.

Took long time for RK 3399 to move from Chromebook to affordable SBC, blu. Are you expecting RK to move quicker, which would eat into their profit?

I expect RK3588 to show up relatively quick in SBCs, and then not have proper GPU stack for a looong time. Just because google are the only entity that can force RK into a working GPU state, and SBC vendors are not google.

A point of observation: unlike RK3530, the RK3588 slide does not mention a GPU at all (unless its written in Chinese).

With Panfrost KMS opensource that might not be true

The biggest on going issue with RockChip is their spotty support especially delivery on solid drivers for their components. The 3399 was to have Vulkan and then that drifted I to smoke. Driver support other than on Android for the 3399 is pretty lackluster as well and has caused many in the community to feel that it is a failed product compared to similarly price SoCs especially when the video output for the 3399 seems more like VGA rather than HDMI HD.

Would be interesting if Google made a full working GPU driver a requirement for Android.

If they did, then Qualcomm couldn’t make any Android devices. 😉

8K sounds nice. I’m not aware of any RockChip that can do 4K/60, maybe they should get that working first?

I guess its easy to say done when its only text on a slide.

All recent Rockchip processors can do 4K VP9 & H.265 @ 60 fps. Or do you mean it’s not working at acceptable levels of quality/smoothness?

Try watching 4K movie (4K/24), TV show (4K/30 or 4K/60), or 4K youtube (arguably the least resource intensive). You get artifacts and stuttering in less 10 seconds. Is that “can do”? Why even bother advertising it? Is it worth frustrating customers like that? Then add in lack of 4:2:2 on the RK3288 which prevents it working on half of modern TVs and various other issues. RK3328 USB issues. The list goes on and on. Thats why none of these SoCs are a runaway hit and relegated to whoever is desperate enough to use them. Allwinner is no better. Neither is… Read more »

I am excited about NXP i.MX8M which seems to be capable of living up to its specs but still waiting for solid mass production samples and even better RISC-V chips. Once those hit mass production, it will significantly change the landscape.

8K is pushed a lot, especially in TVs and some trial services. However it is interesting to hear what UHDFsay Ultra HD Forum: ‘2019 year of maturity’ The Ultra HD Forum (UHDF) – the global organisation defining industry best practices for the introduction of technologies to facilitate ultra-high-definition (UHD) viewing experiences – is bringing a significant update to its Guidelines to 2019 NAB Show. ” The Forum acknowledges 8K development as a promising future technology and plans to work on its inclusion within future versions of the Guidelines. UHDF president Thierry Fautier stated: “8K is not at the same state… Read more »

There are always optimistic in their roadmap. It has been delayed, and COVID-19 has probably not helped either.

” The processor targets Internet of Things applications and should be available in Q2 2020. ”

Honest question are there chips designed in China or just made there?

Rockchip chips must be designed in China, then manufactured by TSMC in Taiwan. Very few companies manufacture their chip themselves now, since silicon factories have become too expensive.