Intrinsyc Open-Q 820 system-on-module was introduced in 2017 with a Qualcomm Snapdragon 820 processor, 3GB RAM, and a built-in wireless module for 802.11ac WiFi 5, and Bluetooth 4.1 connectivity.

The company has now announced an almost identical ultra-compact module but based on Qualcomm Snapdragon 820E and featuring 4GB RAM. Open-Q 820Pro μSoM is a drop-in replacement for Open-Q820 requiring only some software changes. Snapdragon 820E is said to deliver 9% faster CPU and 5% faster GPU speeds at the same power consumption compared to Snapdragon 820.

The company has also upgrade its software offering with the module supporting Android 9 instead of Android 7 at Open-Q 820 launch in 2017, as well as Debian Linux. Some public documentation has been released by the company. 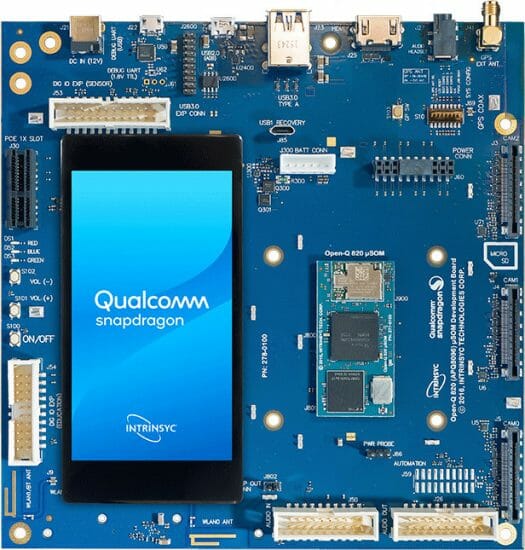 Existing customers with products based on Open-Q 820 may benefit from the upgrade to Open-Q 820E either for high performance, or lower power consumption for a given performance level.

Intrinsyc Open-Q 820Pro SoM can be ordered now for $259, and the development kit for $499 (without LCD display) with delivery scheduled for early July. More details and purchase links can be found on the product page.