The “patent” part causes an issue in Linux, as companies need to license it in order to ship it in their products or operating systems image. I recently re-installed Ubuntu 18.04 on my laptop, and if I reinsert my “test” USB drive: BTRFS, EXT-4, and NTFS partitions all mount automatically, but not the exFAT one. If I click on the partition, I get this message:

That’s because Canonical does not provide exFAT by default in Ubuntu due to legal issues.

The drive will mount successfully:

Note that it’s using FUSE (Filesystem in Userspace), and it’s usually not a problem with today’s fast processors, but I remember adding NTFS via Fuse in a system powered by Arm9 processor clocked at 200 MHz many years ago, and it was much slower than EXT-4 due to the extra time required to copy data from the kernel to userspace and vice-versa.

But soon those issues will not matter anymore, as Microsoft has announced their plan to bring exFAT to the Linux kernel, and released the specification to help in the effort. This will also solve the patent issue:

We also support the eventual inclusion of a Linux kernel with exFAT support in a future revision of the Open Invention Network’s Linux System Definition, where, once accepted, the code will benefit from the defensive patent commitments of OIN’s 3040+ members and licensees. 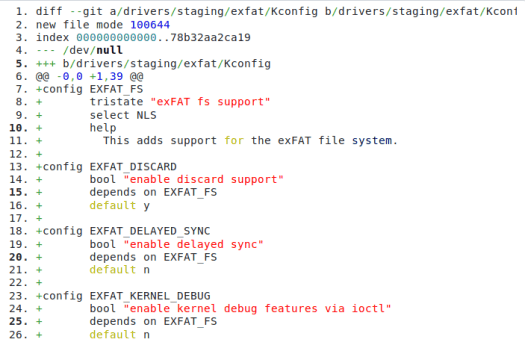 Microsoft’s exFAT has even been submitted to mainline Linux, but it’s in staging, and based on feedback from kernel’s developers there’s a lot of work to be done before it meets the Linux kernel standard, so it will probably not be production-ready this year.

However, if you as a manufacturer/brand wants to sell product with exFAT support, you still have to pay Microsoft royalties per product sold and have a valid license. However, it now seems that companies like Tuxera and Paragon can handle the licensing on behalf of Microsoft https://www.microsoft.com/en-us/legal/intellectualproperty/mtl/exfat-licensing.aspx

You missed the point. MS releases exFAT as royalty-free to Open Invention Network and that is the biggest point in the news. So it will be completely free as long as your company is a member of OIN.

It’s still not free for commercial use. Plenty of companies have no reason to join the OIN, so they’re still going to have to pay up for using exFAT. It’s also not free to join the OIN.

I’m not a legal expert but if they submit to the linux kernel (and it is incorporated) it is licensed under GPLv2 and you can redistribute sources and derivative works royalty free.

> manufacturer/brand wants to sell product with exFAT support, you still have to pay Microsoft royalties per product sold and have a valid license

From what I understand, if the kernel devs implement a driver off the specs in white room conditions, the resulting code base won’t require Microsoft’s licensing or paying royalties.

That is a really good point.

So here is a question. Are the older FAT file systems now ok to produce as a result of this? Or had their patents run out?
I thought FAT32 had some prices still under patent.
What a mess.

It’s really great. I see this as a new approach to the old “embrace and extend” that I’d call “spread and defend”. Basically by offering exFAT to almost everyone, they will encourage spreading it everywhere without checking for the patent risks. And if one member files a patent litigation on them (or other OIN members) this can terminate their patent protection, with a high likeliness that something in their product chain has used exFAT one way or another, thus exposing them to the risk again. And while it’s easy to avoid certain stepping on certain patented things, it certainly is… Read more »