The latest 2-in-1 tablet/laptop from CHUWI, is the UBook Pro, that the Chinese manufacturer hopes will rival the Microsoft Surface Pro 6.

The company has been manufacturing tablet/laptop computers since 2013. They targeted the mobile office industry with the UBook, and now the UBook Pro, with focus on versatility, quality, performance, and portability.

UBook Pro has some interesting enhancements to their original tablet. The processor is the first big change, being an upgrade from an Intel Core m3-6Y30 processor of the previous UBook tablet, to a high-efficiency 8th Gen Intel Core m3-8100Y processor with a claimed overall increase in performance of 50% compared to the original UBook tablets.

The 12.3-inch FHD IPS full lamination screen has a 3:2 ratio, which can be found on the Surface Pro, HUAWEI Matebook and others, delivers a vivid picture with exceptional resolution. The design is meant for the office work of many types and built to be used in the mobile office environment.

The 128/256 GB M.2 SSD is able to read and write at up to 500MB/s compared to the eMMC of the UBook, this performance increase means the UBook Pro saves much faster than before and helps with start-up speeds and application loading. The stylus pressure sensitivity is increased from 1024 to 2048 in the HiPen H5, which is applicable to stroke thickness and the handwriting accuracy, which can translate into more complex graphics and improved handwriting capability.

The keyboard has the same key switches as the Surface series and the back-lit keyboard design has improved the overall typing experience, which is suited to the mobile office capability that the UBook Pro is built to deliver. 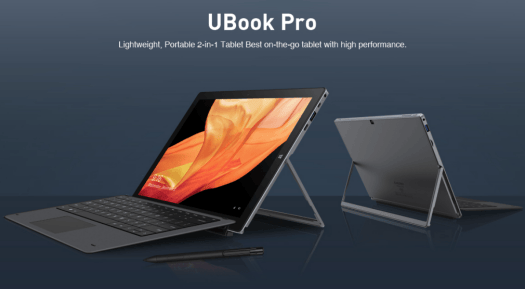 The U-Shape kickstand at the back is made for a step-less adjustment, that can offer a max opening of 145° offering convenience and efficiency, as a tablet, workstation or laptop, in a wide variety of locations. Equipped with Intel UHD Graphics 615, making 4K hardware video decoding available. The tablet is a slim 9 mm thick and weighs a mere 780 g making the units extremely easy to carry and setup.  The fanless design makes the UBook Pro silent and cool-to-the-touch. 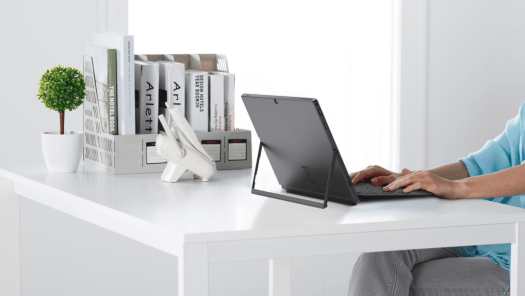 Is it also impossible to repair just like MS Surface ? https://www.reddit.com/r/Surface/comments/6hpvgh/surface_laptop_is_literally_impossible_to_repair

CHUWI UBook Pro has launched on Indiegogo @ https://www.indiegogo.com/projects/ubook-pro-typing-drawing-unleash-your-creativity/x/1760545#/
$449 for tablet only, $499 for a set with keyboard and pressure-sensitive stylus.