We previously wrote about Novasom M7 Rockchip RK3328 SBC being promoted as a drop-in replacement for Raspberry Pi 3 in industrial projects. That’s despite the different port arrangement, and instead, the company bases the claim on the availability of the 40-pin header, mounting holes matching RPI 3 board design, as well as software compatibility thanks to a library that allows customers to re-use the code written for Raspberry Pi boards.

Based on feedback from customers, the company has made some changes to their design and launched Novasom M7+ SBC, and made several improvement to the software to be even more compatible with Raspberry Pi 3 board. 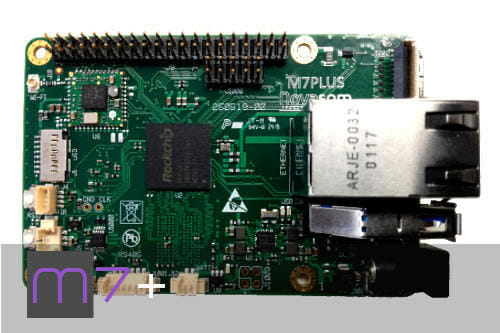 Specifically there are five changes:

The rest of the specifications are the same with up to 4 GB DDR3 RAM, up to 256 GB eMMC Flash, MicroSD slot, HDMI 2.0 output up to to 4K @ 60 Hz, LVDS via external adapter, Fast Ethernet and so on.

The company also announced further work on the Raspmood library and the kernel to make their Raspbian image even more compatible with software developed for the Raspberry Pi 3. Few details were provided, but Gianfranco Catolla, EVP, Sales & Marketing for the company explained it’s now even easier:

Before it was possible to reuse the SW because we implemented Debian (RPi name it Raspbian) but making the SW compilation some (few) channels have to be renamed. Now this is solved. Recompiling with our Kernel and our library everything works immediately.

You may find more information and inquire the company for pricing and availability on the product page.