Libre Computer and Firefly Team previously collaborated on Renegade (ROC-RK3328-CC) board powered by a Rockchip RK3328 quad core Cortex A53 processor and mostly following Raspberry Pi 3 form factor.  We already knew both companies worked again on another Rockchip RK3399 single board  computer, and were expected to launch it in July via a crowdfunding campaign.

The good news is that Libre Computer has just launched Renegade Elite (aka ROC-RK3399-PC) SBC on Indiegogo. 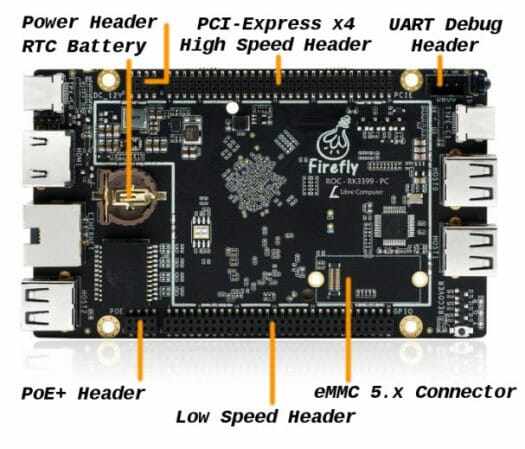 Renegade Elite will support Linux based operating systems like Debian, Arch, Ubuntu, Fedora, OpenSUSE, Android 8.1, and more. Supported Linux kernel versions will include Linux mainline 4.19 or greater, and Linux 4.4 from Rockchip SDK. The company will also provide a UEFI-capable GUI bootloader stored in the SPI flash for network boot.

The board will ships in a CNC aluminum + acrylic case that also serves as a heatsink to keep the processor and board cool for stable operation.

Renegade Elite with CNC case is offered for $99 plus shipping which adds $12 to the US, and $16 to the rest of the world. Delivery is expected in September 2018.

It is the only reward available right now, but the company however plans to add more rewards soon such as a Mezzanine with 802.3at PoE+, 4 lane PCI-E M.2 up to 22110, USB/SDIO M.2 (Non-PCI-E) 2230 for WiFi, more CNC enclosures, a WiFi, MIPI DSI and eDP touchscreen displays, a MIPI CSI camera module, some eMMC modules, USB-PD power supplies, and stackable rack kits with aluminum heatsinks. 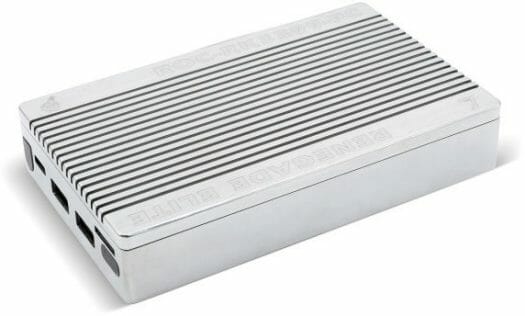 They’re not alone when it’s about using parts of the enclosure for heat dissipation 😉 https://forum.armbian.com/topic/7511-nanopi-m4/?do=findComment&comment=58021

What I do like a lot here is really supporting USB-C (USB3, DisplayPort and even powering through the port at the same time) and the Mezzanine concept for add-on boards providing M.2 slots for various uses (and hopefully also one with a sensible PCIe SATA controller for NAS use cases)

Speaking of ‘NAS use case’. It gets really interesting with RK3399: https://forum.armbian.com/topic/7310-rockpro64/?do=findComment&comment=57925

It’s almost like FriendlyELEC and Firefly worked together on the hardware design.
Similar case design, and NanoPi M4 price with 4GB RAM will also be $99, although I can see they also have a 2GB RAM version for $79.

> It’s almost like FriendlyELEC and Firefly worked together on the hardware design To be fair FriendlyELEC puts the SoC on the appropriate side of the PCB for a long time on their small NanoPi NEO so these boards can be combined with some metal plate or enclosure to efficiently dissipate the SoC’s heat away. I really hope more vendors stop copying the stupid Raspberry Pi design with the SoC on the wrong PCB side and do it as we can see here. In the meantime with ‘NAS use case’ in mind I found Syba’s SD-ADA40118 M.2 SATA controller based… Read more »

> NanoPi M4 looks more compact I would look at the M4 as NanoPC-T4’s little sibling (and I really hope they made them as compatible as possible from a software point of view so that same settings/images will work for both boards). Looks like same AP6356S Wi-Fi but eMMC on the M4 is optional — it’s the same eMMC connector they started to use on their other boards recently — and I really wonder what they did with PCIe here. On NanoPC-T4 PCIe is available as M.2 key M slot ready to take NVMe SSDs or adapters as described above.… Read more »

DisplayPort and powering over the same port at the same time would be most welcome for anything with mobility applications. I’ve really grown to appreciate this feature combo on my MT8173 chromebook.

Thanks, well spotted @tkaiser. Next I would love to see an SoM with wifi and dispay driver specifically to be a replaceable compute board for an 11.6″ laptop. It would need everything flush mounted so it can be slid into the lid behind the display and make good thermal contact with the lid. The connector would provide power from a battery in the laptop body, and have standardized GPIO / storage bus connector to the laptop body to support ports, expansion, and leave some GPIOs and space open for custom mods. Despite being nearly as slim as a McAir this… Read more »

Yay! Finally an intelligent board layout! They put the SoC on the side with the flush mount components so that the heat spreader can be mounted directly to an alumiinum case so the case can function as the heatsink. I can’t believe it’s taken this long for a board designer to make this intellectual “leap”.

Interesting. For the same price, I’ve accumulated a couple of Zotac ZBoxes. Larger, and more power consumption, but so much easier to use. RK3399 systems just are not inexpensive enough. All the RK3399 Android boxes for TV are triple the price of S905x boxes. How come? Linux will be supported. What will be the state of the X / Wayland drivers? That’s a big sore point with all little ARM boards other than the Raspberry Pi. I want mainlined drivers, just like I have for my Atom-based boxes! I bought an Android box with an s912 and then discovered that… Read more »

The SoC cost 4 times as much as S905X. Double the memory bandwidth means you need more expensive memory chips. Triple the power consumption means you need to beef up the power ICs. More IOs means more complicated PCB to design and each unit cost way more. It has 7 (2 x CSI, DSI, PCI-E x 4, EDP, 2 x USB 3.0) high speed IO interfaces vs 1 (HDMI) S905X. S905X is a low feature count SoC. RK3399 is a high feature count SoC. It’s apples to oranges. Outside of the features, you get at least double the performance and… Read more »

Its been the same process for the past 4 years since the first release of MK802 – exciting hardware, hidden bugs and no/minimal software support. Why do people keep funding this stuff? The first ‘decent’ RK3288 SBC that runs properly is the Tinker Board from Asus with Linaro doing software development (2+ years after RK3288 products came out) and before that the only fully functioning one was the Chromebook build by Google. Consider my jaded and skeptical. I’ve pretty much given up on ‘high performance’ ARM and going forward with low power X86 as its more powerful, better software support… Read more »

As an end-user more or less I kinda feel the same, the only ARM SoCs that I can honestly say been reliable are Marvell Armada 385 and Allwinner H3 running either “mainline” Linux and/or FreeBSD. IMX6 (quite slow and expensive however) are from what I hear also reliable however video is still an issue unless you’re using some non mainline kernel repo. Creds to the people hacking on different branches for Rockchip, Amlogic etc but it’s a hassle with 5 different non synced repos with rather old kernels and quirks. Being an somewhat early adopter (AMLogic S805 as an example)… Read more »

If you are interested in Amlogic S905X, see https://github.com/libre-computer-project/libretech-linux
Support is very stable.