One of the two most common type of Arm boards are single board computers with everything from processor to memory/storage to ports is placed on a single PCB, and system-on-modules with processor, memory and storage, and sometimes some extra chips with for network connectivity, audio and power management that are supposed to be inserted into a baseboard exposing connectors and headers.

The upcoming Khadas Edge board is a little different since it combines both categories into one board with USB receptacles and HDMI output as well as 314-pin MXM3 edge connector to connect to Khadas Captain baseboard, or any other custom compatible baseboard.

Khadas Edge will come in three variants (Basic/Pro/Max) with the following specifications: 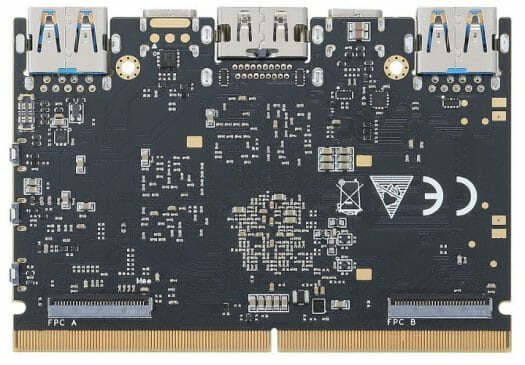 The board should ship with two Wi-Fi antennas and a heatsink. Shenzhen Wesion, the company behind Khadas boards, will provide Android Oreo, Ubuntu 18.04, Debian 9.0, and other operating systems for the board. They also mention mainline U-boot and Linux support, as well as AI features such as TensorFlow, Android NN(Neural Networks API).

Khadas Edge will fit into a full featured  Khadas Captain carrier board, but I do not have the full details for either boards yet. Edge IO module will insert into the FPC connector to provide easier access to some I/Os without having Khadas Captain board.

Other accessories are also planned include an LCD module and a camera module.

Now you may think “hmm, I saw something similar a few years ago…”, and you’d be right as Shenzhen Wesion was the company behind GeekBox TV box that featured GeekBox RK3368 octa-core system-on-module with an edge connector and various ports like HDMI, Ethernet, and USB. While you could use the device as a simple Android TV box, it was also possible to take out the board, and connect it to the larger LandingShip base board.

Back to Khadas Edge. As you would have guess it’s not quite available yet,  and the company plans to launch it next month together with accessories and Khadas Captain carrier board via a crowdfunding campaign on Kickstarter or Indiegogo. Prices have not been announced yet, but they will be competitive.

There should eventually be more details on Khadas Edge’s product page.

Overall a nice board (USB-C with full USB PD compliance and even WoL). I hope it’s really priced competitively later.

Board appears in the same style as the RK3368-based Geekbox, which was neatly laid out (another dual SoM + standalone) yet poorly (re linux) supported. Let’s hope this board has a better life thanks to a better choice of SoC.

Thanks for the article! We will update the details of Khadas Captain Early August.

I remember the geekbox, got it and the baseboard though support for it was pretty limited which is why I never invested more into it. though I’ve had a good experience with my vim2 and support so i’ll give it another go.