Rock Pi S is a tiny single board computer powered by Rockchip RK3308 quad-core Cortex-A35 processor coupled with up to 512MB RAM, up to 1GB SD NAND flash, as well as a USB port, Fast Ethernet & optional WiFi & Bluetooth connectivity which was announced to sell for as low as $9.90 with 256MB RAM, 256MB flash and no wireless module.

Seeed Studio has now started to take pre-orders for Rock Pi S with the board selling for $14.90 with 512 MB RAM, 512MB SD NAND flash, WiFi & Bluetooth. Shipping is scheduled to start on October 15th. [Update: Seeed Studio has also listed the 256MB RAM version of the board for $9.90] 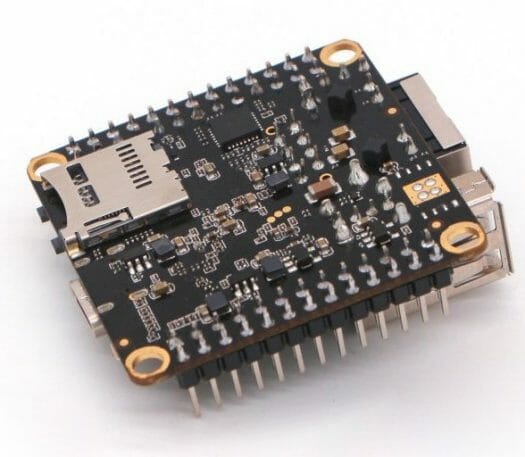 Radxa provides supports for Debian Linux operating system and Buildroot build system. We now also have more details on the Wiki. Note the board’s boot priority means NAND flash will boot before the MicroSD card. But if you’d like to try an alternative OS and boot from a MicroSD card instead, you can do so by pressing the Maskrom key.

In case you wonder what an “SD NAND flash” is, Tom Cubie, CEO of Radxa, explains it and the reason behind the choice of this component as follows:

For the cost sensitive IoT application, SPI NOR is kind of awkward because for small size(< 16MB), you basically can not do anything within it. For larger size(128MB), the cost is relatively high. What we choose on ROCK Pi S for storage is SD Nand, nand flash with SDcard interface, soldered on board, which offers 1Gb/2Gb/4Gb/8Gb options, perfect for an IOT Linux image. So the user don’t need to waste the 16GB uSD card.

The board reminds me of Allwinner H3 based Shenzhen Xunlong Orange Pi Zero and FriendyELEC NanoPi NEO / Neo Air boards and competes against those SBCs. Rock Pi S does offer some unique features however, since AFAIK it’s the only board in this form factor that comes with a VAD (Voice Activity Detector),  most competing boards don’t come with built-in storage, it’s the smallest (38×38 mm) from the list, and with an the Cortex-A35 processor, the board should consume much less power (suspend to ram: 9mA; idle: 50mA @ 5V).

If you plan to use WiFi or Bluetooth you may have to buy a separate u.FL antenna, as the board does not have chip nor PCB antenna, and Seeed Studio does not indicate whether they ship the board with an antenna or not. [Update: The company confirmed the board will ship without antenna]

I can’t help it to find these cute. I’ll see to source some of those tiny sbc’s and check em out.
Don’t know if I’d find a use for them.

Spipeed Longan Nono RISC-V board also provide a SD NAND. It is not soldered on board, but as a free accessory.

There is some movement in the rockchip mainline kernel for the rk3308 so hopefully it’ll work in mainline in the coming months.
I have a different board based on it and the power consumption really is impressive. Sub 100ma when idle without any tweaking and running some awful android thing that was pre-flashed.

That’s their Android patched kernel isn’t it? I’m talking about mainline that seems to be here https://git.kernel.org/pub/scm/linux/kernel/git/mmind/linux-rockchip.git/
There are patches for the rk3308 coming in like this one https://patchwork.kernel.org/patch/11179173/ so someone is working on mainline support.

That is a generic kernel. I don’t think they have Android for rk3308. You can try pushing their stuff up from 4.4 to 5.4, don’t know how much pain is involved. Never know, ‘git merge’ to 5.4 might work. 4.4 is recent enough for me not to be a problem. I only have problems with the 3.x stuff. There is nothing between 4.4 and 5.4 that is important to me, it is mostly piles of Spectre fixes on x86. Plus that rockchip repository is maintained and if you file issues on them, they actually fix them. I see there is… Read more »

I think I’ll let rockchip get it working in mainline before I mess with it. I mainly got the board to check that the power consumption numbers weren’t a lie and I was pretty impressed.
Rockchip have a single core A7 chip so I hope they eventually come up with a single core A35 with memory in a big pitch bga or qfn 🙂

Heh not that impressive considering all RPi devices will soon have 5.4 support.

>Heh not that impressive considering all RPi devices will soon have 5.4 support.

That’s good news. One day they’ll manage to release a board that doesn’t have bugs that should have been caught pre-production and not have to spend weeks going full jamesh on the cover up.

It looks like they removed the product page. Only the $9.90 page is up now.

They updated the item price to 13.90, but be aware that it does NOT have NAND flash on board!

I want a smalll SBC like this packaged into a wall plug computer like the old Marvell Sheevaplug. Anyone sell this?

Less than ideal for several reasons — the first being the choice of only 2 prong plug instead of 3 which would offer a much more physically secure connection. A few bad decisions like this can really make a difference.

Also for having had a Guruplug (the Sheevaplug’s successor), I missed two important things. One was a female power plug so that it does not make me lose one wall plug where I plug it. The second one was a reset button, because once you connect your usual hardware on it, you definitely don’t want to pull the plug anymore to restart it! I’ve long thought that a more suitable format could be a multiple outlet prolongator instead of a box attached to the wall. It’s often easier to find room for this, network cables can be more easily hidden,… Read more »

No no, the dreamplug is a disaster. The idea was good, not the implementation. And I’d rather have it in this form factor: https://www.aliexpress.com/i/32878693165.html. There’s plenty of room to even place a large thermal plate in it! Some would possibly want to extend it to individually control the outlets 🙂

I can’t see any female power plug in that device.

it’s just a matter of the HAT and case. Actually it’s simple, we can make that for you. What kind of performance do you need for plug computer, ROCK Pi S, ROCK Pi E or ROCK Pi 4?

What I was hoping for is not something made “for me” (read $$$) but rather something made for “the marketplace” — a tested product available in small quantities (10-20 units) at a reasonable price.

Something like 15$ solves your issue. I think it’s better to make it with ROCK Pi E with dual ethernet. I have some cool idea that provide PoE power from the ROCK Pi E RJ45 ports to other devices. That should what a plug computer do 🙂

Yes, that would solve the issue.

My personal needs are more modest — 500mA at 5V over short distance would be fine. In other words — USB.

And please do not forget the female power outlet! For many of us it already makes the difference between usable and unusable PLC adapters!

I also noticed that in most cases, while the device’s thickness matters (in order to place it behind a sofa or whatever furniture), its width rarely matters (except when used on multiple outlets) and height almost never matters, thus it’s possible to use a large thermal plate inside and not reproduce the same issue as in the guruplug where the CPU board was cooking the power supply till it died.

By the sound of it there is plenty to learn from past devices errors and benefits. You could do with a crowd designing stage to define what’s needed and what’s not. Better to understand any possible market?

Like the board a lot, I just think it’s too bad they didn’t route just on USB signal pair to one of the headers. Would have increased the options when merging it with custom hardware. Anybody know if the USB-C is ready to be used as a host with just an adaptor cable?

The rk3308 has one usb otg and one usb host, for v1.1 and later hardware we route the usb otg to type C so the user can use single cable for power and adb to have shell under Linux without connecting the serial console. I think usb on the gpio header can expand a lot of features for custom HAT boards, we will consider that.