We’ve already seen a fair amount of portable displays launched in recent years which are often supposed to be brought along with your laptop or smartphone, including DUO add-on display, TAIHE Gemini 15.6″ FullHD/4K display, and the low-cost BlitzWolf BW-PCM1 11.6″ display among many others.

Another option is Desklab 15.6″ portable display available either in Full HD or 4K resolution and which comes with stereo speakers in a similar fashion to the TAIHE model but with different ports, and no battery. 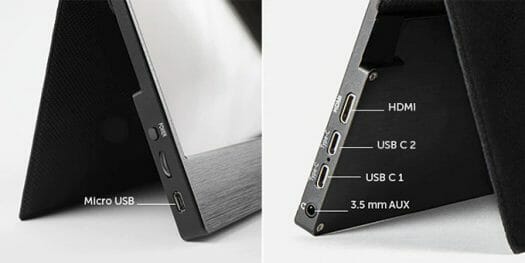 Since the display comes with both HDMI and USB-C ports it can support most devices without adapter including laptops and compatible mobile phones, as well as games consoles, single board computers such as the Raspberry Pi, or a desktop PC. Contrary to the TAIHE Gemini 4K model, Desklak 4K display does come with a touchscreen and it’s also quite thinner and lighter.

This type of display may also remove the need for a USB-C hub and can charge your devices, again using the power from the host either its battery or mains.