TS100 is a popular soldering iron in the shape of a pen, and whose temperature is controlled by an STM32 microcontroller. Parameters such as temperature, temperature steps, sleep time and others can be setup over USB, and the soldering is powered by a standard 19V power supply often used with laptops.

TS100 sells for around $50, while the more recent USB-C powered version (TS80) sells for a little over $70. But a new model that looks similar to TS100 minus the OLED display is now selling for around $10 on Banggood. 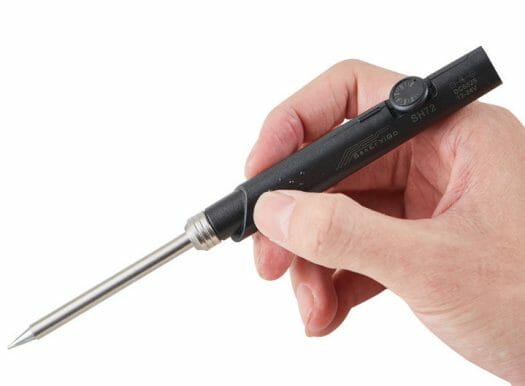 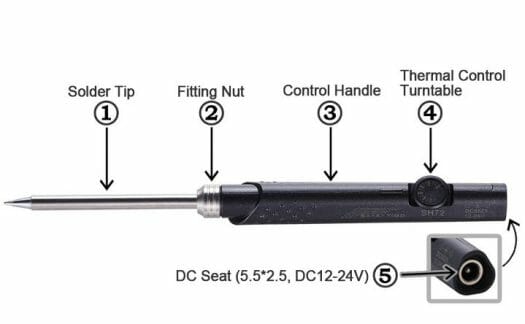 One person asked if it’s based on STM32, but at the time of writing, Banggood did not reply. Beside the lack of OLED display, SH72 soldering iron does not feature a micro USB port for configuration, and it’s unclear whether the temperature is MCU controlled, or there are any sleep modes.  The product page on FastTech does mention it heats up in less than 10 seconds.

I could not find any PCB photos at this stage, so we’ll have to wait for teardowns before knowing what it is really made of, and whether it’s safe to use, as the manufacturer may have taken some shortcuts to bring the price as low as possible.

Thanks to Ian Beckett for the tip.

Received mine today. Exactly what you’d predict from a $10 iron; Driven by a TPC8107 and temperature controlled by a lm2904 opamp loop. I don’t have ir thermal handy so I can’t comment on temp precision, but I wouldn’t solder airbag systems with it. That said, it seems more than good enough if you just need rough temperature control.

Also: the tips work just fine on my TS100, and considering it costs about the same as just a ts100 tip on bg it’s hard not to call it a bargain.

I was looking at that too. Interestingly, it could work with different voltages up to 24v according to bg, which is a feature I liked.
Variable 72w up to 24v power bricks could be found on BG for under 10 to complement this. Tips are the most expensive among similar t12/ts100/etc tips though… I highly doubt there is a stm32 I inside…

I would not be surprized to find only an LM358 and a MOSFET quite frankly. But that fits the purpose pretty well and even makes it easier to adjust the temperature than on the TS100 where you have to figure what button to press and how to escape from the menus.

Somebody commented (on Facebook) saying it’s likely another version of https://www.aliexpress.com/item/32828878527.html with a single opamp controller

Russian reviews (Russians being extremely diy highly technical customers) are good enough except for the fact that build quality is bad, but design is very useful. So if the new one is a build quality improvement over that t12 clone, then it’s definitely a very useful product, I am getting one myself.

I have a USB soldering iron that looks very similar to this. It has no temperature control and connects with an 1/8 in phono Jack. It was 12.00 on Amazon I think and I love it. When I need a higher temperature I switch from my regular 1A USB block to a larger on that will do 2A. Works fine for me and actually it is usually the soldering iron I use if it isn’t going to be a lengthy job. It’s nothing to pull the plug after each piece of work and it does heat up in less than… Read more »

You have a link to the one on Amazon?