You may think about installing a home automation system, and WiFi may appear like the obvious way to go since it removes the need for cumbersome cabling, but wired networks are more reliable and secure, and there’s no need for batteries to be recharged or replaced. 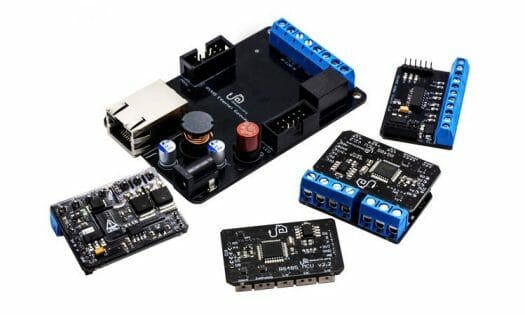 Getwired is comprised of four modules communicating over the standard RS-485 protocol:

The diagram above shows how the Gateway can be connected to the LAN and control from a home automation system, while connected to modules with GetWired MCU module and GetWired shield.

The diagram below shows how each module may be connected to sensors, lights, AC home appliances, and buttons.

GetWired modules rely on the open-source MySensors communication protocol, are compatible with the Arduino IDE, and support FOTW (Firmware Over The Wire) updates. Since it’s using the standard RS-485 communication stand is work with various open-source home automation controllers such as Domoticz and Home Assistant.

The project has recently launched on Crowd Supply with a $10,000 funding target. Rewards start at $19 for a pre-programmed GetWired MCU Module, but most people may prefer kits such as the $130 basic bundle including one GetWired Ethernet Gateway, one GetWired 2SSR Shield, one GetWired RGBW Shield, and two GetWired MCU Modules. Shipping is free to the US, and $5 to $10 to the rest of the world depending on the selected reward. If everything goes as planned, backers should expect their perks to ship around the end of June 2020.

I didn’t even know that RS-485 multi-point was a thing. Are there other technologies for cheap ~10m bus communication besides CAN/LIN and the recently finalized 802.3cg?

Screw clamps do not make a product user-friendly. Rs485 can be a good home automation bus, but at least they should use unpluggable color coded push in clamps like on knx devices. Also note Selfbus is a project which uses KNX protocol and tools to build very low cost diy KNX modules. Knx is 2 wires only while also providing limited power supply for the bus logic and microcontroller.

Well yeah… good luck with the “star” configuration of the bus and all the problems related to it.
IMHO this makes absolutely no sense in the era of the dirt cheap wifi uCs.

I would also rather not pull wires throughout my home, but can, rs485 and other similar busses all are pretty forgiving, with regard to the topology used, at least as long as noone is trying out megabit speeds and insane slew rates.