Around 10 years ago, I decided it might be a good idea to have an online presence. At the time, I just thought I would write from time to time, and I had no idea it would eventually become my main activity. My very first post was on February 14, 2010 about software development tools such as CVS and Bugzilla. That means today is the 10th anniversary of CNX Software website!

So I thought it might be fun to look at the most popular posts of the last ten years. I only installed Google Analytics sometimes in 2011, but it should not affect the results since I did not have many readers at the time, and the post that really started to bring more visitors, and made me switch from a $1 monthly hosting plan to a VPS, was “74 USD AllWinner A10 Android 4.0 Mini PC” published in May 2012. 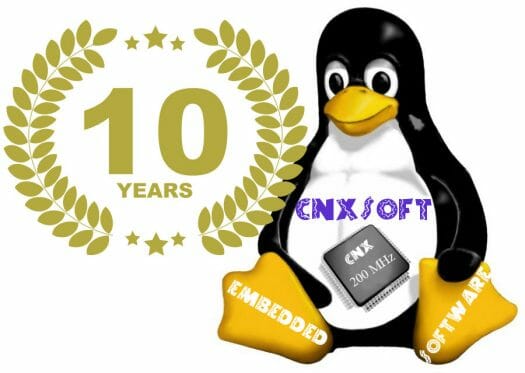 So with any further delay, here are the top ten posts since CNX Software was created in reverse order, and based on the number of views reported by Google Analytics:

All the most popular posts were written between 2012 and 2016, and for some reason, none of the more recent posts come close. Most of the posts above have very little traffic now, and traffic is spread out over a large number of posts. Reviews don’t seem to bring as much traffic as in the post based on the top ten posts of 2019, possibly because Google now brings YouTube reviews at the top of web searches.

Anyway, it’s been a fun 10 years, and I hope to continue for many more years. Thanks to everyone who visited the site, especially regular readers and commenters!

Happy Cake Day, and keep up the excellent information you pump out to the world.
For you…(´・ω・)っ由

Congrats on your success, and thanks for lots of interesting info !

Happy anniversary Jean-Luc.
Do you know what it would be interesting?
Since the last 10 years you are following technology very close, it would be nice to write a post about which you think are the technology momentums of the past decade and why.

Congrats, Thanks for the Great job you have been doing.

Happy Birthday! FWIW, Liliputing turns 12 this year. Our traffic peaked around 2013 – 2016 before dipping somewhat (Due to changes in Google’s algorithms? Changing consumer interests? Increased competition? Who knows?) But enough people are still interested in little computers that it remains my full-time day job. And reviews have never brought in enough page views/ad revenue to justify the amount of time I spend on them… but they’re still worth doing from time to time because they help keep me familiar with the latest tech and I think they provide some value to folks who do bother to read… Read more »

We also peaked in 2016, it’s been back, and last month CNX Software reached a new peak just a little above the 2016 peak. But traffic sources have changed a lot, and now we get much more traffic from AMP (Google Discovery). There’s on posted in particular that Google likes and it quadrupled traffic on one day. Sometimes, we have to wait a few weeks, before getting a popular AMP post.

Most reviews are not worth the time. I suppose the popularity of the product and timing is important.

Looking at this list, might be good to do more tutorial articles. They are popular have have long legs via Google which will draw new readers to your site.

Jon, this is an excellent idea! When I see the number of people around me who seem “impressed” to see what I can do with my tiny machines, it simply proves they don’t know where to start from, and we’ve all gone through this. Explaining how to setup a toolchain, configure mainline u-boot for your board, build a mainline kernel with minimal features, load it over TFTP and/or serial to try to boot from RAM, or put it on micro-SD and boot via extlinux.conf, set up a basic initrd to have your first shell, etc… All of this seems magic… Read more »

And that makes me think that it would be a great opportunity to centralize links to known resources by board , vendor, or SoC family. Most of them are already discovered by Jean-Luc or by commenters here, so that would just be an organized collection of links to OS images, toolchains, kernels, DTS, u-boot, firmware, DDR code etc.

This way it would be even more tempting to buy a cheap TV box matching available images and try to flash it and try to place your favorite OS on it.

I could always setup a Wiki, but I would not be able to maintain it on my own, there are just too many boards, operatign systems, bootloaders, etc…

happy 10y! I really hope you’ll continue to write 10×10 more years 🙂
you and your team are very talented technology bloggers !
keep up the good work
you’re my no #1 tech blog

Always one of my daily reading before going to bed. Congratulations for your tenth anniversary!!

A few hundred thousand pageviews. The top post represents around 0.45% of the traffic for the last 10 years.

Happy birthday, CNX. “All the most popular posts were written between 2012 and 2016” … that was also my most active time here on this forum. So maybe I can find out why I’m now less here on this forum … ? Let’s see … The original Raspi was released in 20212, so that was the start of cheap, popular, mainstream SBCs, with ARM, and thus a revolution: running Linux on a 30 EUR ARM board … that gave thrill. That revolution has calmed down IMHO. FWIW: May 20212 was when you and I had a beer on that small… Read more »

I also miss 20212, that was a long time ago, good they have invented the time machine since then 😉

> The original Raspi was released in 20212, so that was the start of cheap, popular, mainstream SBCs, with ARM

Well, the BeagleBoard then BeagleBone were already there and already started to set a new standard. Admittedy they were more expensive ($89) even if they were of way higher quality, stability, performance, feature set and software support by then. The BeagleBone Black (or BBB) arrived one year after the first RPi at half the price of its big brother. I think it was extremely successful but probably not as much as RPi.

Congrats!
Looking forward to the next 10 years.

Happy anniversary! Thank you for the great content over the years 🙂