This project is more complex and requires an ESP32 board with PSRAM to run such as boards based on ESP32-WROVER module with 4 to 8MB PSRAM. The Barracuda App server (BAS) comes with a Lua VM, and in complement with the LSP App Manager that facilitates active development on the ESP32 by providing a web interface. 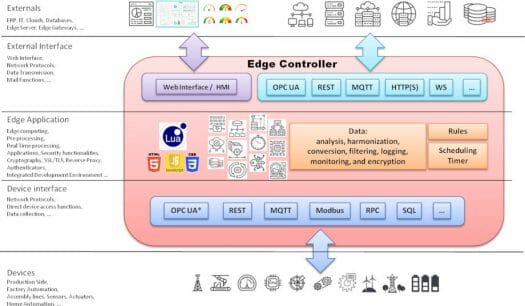 The company provides instructions to build BAS from source, as well as the LSP (Lua Server Pages ) App Manager that links to the binary-only BAS library. The Linux version of the ESP-IDF is recommended, so in Windows, you should install the “Windows Subsystem for Linux” first. The source code for LSP App manager can be found in Github, and documentation on Real Time Logic website. The Barracuda App Server library has quite a few more features than just the Lua VM as shown in the above diagram. It is available for ESP32 and other targets as well, and as a product from the company, the source code is available under a commercial license.

The video above shows how you can flash the LSP App Manager demo code to the board to control a server. After the initial setup, everything can be done in the web browser from editing Lua code to control the servo via WebSockets, to loading a trusted TLS certificate from Let’s Encrypt.

Although I recently started playing with MicroPython, I am still very skeptical that scripting languages requiring an interpreter like Python or Lua are the best choice for constrained devices. Probably super useful for web developers interested in making some quick automations but imho not for anything serious.

One of the great benefits I have learned from the Lua founders and by reading the Lua book is simply: Use Lua for what it is good at. Unlike how many other non C languages are used for embedded, such as Java, Lua developers in general do not try to solve everything using Lua. I think this design pattern is the main reason for why Lua has been so successful in the gaming Industry, where Lua is used extensively. Modern embedded systems have a tendency to be very complicated, especially when IoT and cloud connectivity is added. These non real… Read more »

seen rust on esp32 yet ? I wonder if people made this work

thought it was done already

Precisely my thoughts. In my head, embedding http/s server in an MCU is a bit backwards.. Using https to send data is fine, but usually unnecessary (hmac usually is enough).

MicroPython on the ESP32 is fine for quick prototypes. The bigger issue than memory consumption etc is that it gives people are false impression that it works like normal python i.e. the TLS support actually validates certificates.

I cannot speak for MicroPython, but with the Barracuda App Server, you can validate the chain of trust, however, it is up to the developer to add the required CA certificates. You cannot expect an embedded device to have a certificate store as large as you have on a desktop computer. The following is a good read for anyone dealing with certificates in devices: https://realtimelogic.com/articles/Certificate-Management-for-Embedded-Systems

When you write validate the chain of trust are you sure that validation actually means what you expect it does? As far as I remember for micropyrhon hostname validation, cert type checks, basic checks for validity period etc are missing so you only know the certificate was/is maybe valid for something maybe. So it’s only really usable with a private root cert and even then every cert you ever issue will be valid forever for any host and any purpose so you better never ever leave a test cert in a git repo by mistake because revoking it is basically… Read more »

Yes! MicroPython != “the product in this article”