The ESP8266 was a jewel in its peak, it ruled the maker’s world in the need for creating a low-cost WiFi module. Being Arduino compatible also furthered  its glory then the ESP32 came in.

ESP32 offered so much more than the ESP8266, and most importantly it was also affordable. With support for Bluetooth and WiFi, ESP32 was to open a new frontier for the development of Internet of Things applications. A major drawback of the affordable ESP32 was the lack of official support of mesh network for the chip, something that was easily possible with the ESP8266.

Mesh network allows you to build a network of nodes that can communicate with each other, self heal, and many more possibilities.  But thankfully, back in 2018, Espressif Systems released the ESP Mesh Development Framework (ESP-MDF) which sits on top of the IoT Development Framework (ESP-IDF), the official development framework for the chip. The launch of the framework makes it possible to develop mesh networking solutions using ESP32 chips.

Below shows some of the benefits of ESP-MESH

There are several applications of the ESP-MESH Framework. One such application is lighting control as shown in the video below.

Getting started with the ESP-MESH framework is possible through the ESP32-MESH DevKit. The ESP32-MeshKit allows you to get your hands working on mesh networking for ESP32. The kit currently comes with the following: 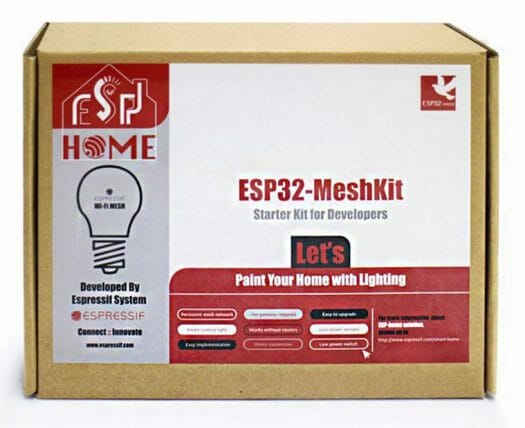 The kit is currently available for $129.99 on Banggood.com as well as on Taobao. Documentation on the new ESP-MDF is available in the project’s GitHub repository and official documentation page, along with instructions on how to set up the toolchain and get started with the new framework.

Say I wanted to build a wireless voice communication system between rooms in a house, like an intercom…would something like this be a good place to start?

I can see they setup BLE in the video, so if that’s the way it works it won’t be suitable. I assume you probably want to do point-to-point communication, as opposed to broadcasting something to multiple speakers. In that case, something like Olimex ESP32-ADF board would likely be more suitable. They also have samples to run VoIP (SIP) software on their board. Recently they have also demo’ed a LittlevGL based GUI, so if you also need a user interface that would b a good point to get started. I’ll likely write about it again once they release the source code,… Read more »

Well, it’s got to do point-to-point but also broadcast. I need it to be able to communicate between rooms, or send a message to all the rooms in an emergency. Plus there’s 5 rooms.

The wifi stack is a binary blob from China, who knows how they do the “mesh” feature.