Allwinner R328 is a dual-core Cortex-A7 processor with 64MB or 128MB built-in RAM designed for low-cost smart speakers that was introduced last year and found into smart speaker sold in mainland China.

According to a recent press release (in Chinese only), the company has now released a 64-bit update with Allwinner R329 dual-core Cortex-A53 processor equipped with dual HIFI4 DSP for audio post-processing and pre-processing, as well as Arm China’s AIPU (Artificial Intelligence Processing Unit) delivering up to 0.256 TOPS at very low power. 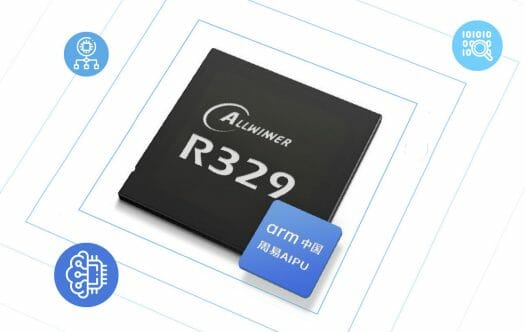 There’s no product page for Allwinner R329 yet, so I extracted some specifications from the press release:

The company will also provide WIFI & BT chip and an Audio codec to provide a turnkey solution to its customers.  The company did not provider clear power consumption numbers but claimed a 2,500mAh battery can last one week in standby mode.

Arm China’s AIPU performance of 0.256 TOPS is said to represent 25 times the AI computing power of a single Cortex-A7 core clocked at 1.2GHz or a HIFI4 DSP clocked at 600MHz. Initially, I was confused as to why they would refer to AIPU as an “Arm China” design instead of simply an “Arm” design, and that’s because Arm China is a separate joint venture that was formed in 2018.

I wonder if it has embedded DRAM?

It’s my understanding of “Built-in DDR RAM” from Google translation.

The AI and audio hardware is similar in performance to Kendryte K210.

HIFI4 DSP is the Tensilica DSP. That DSP is used in Alexa enabled smartmics by Knowles. https://www.aisonic.com/ but Knowles has extended the instruction set a little (not sure if that matters much).

So is this AI hardware standard CNN? Can it run tensorflow models?

This same HiFI4 DSP is used in the iMX8. There are open source tools for it here:
https://thesofproject.github.io/latest/platforms/index.html?highlight=hifi4

I have not used these since I don’t have a board with a HiFi4 DSP. There are also a lot of third party libraries available for this DSP.

Ignore the Allwinner WIFI+BT and use an Ampak module. I would also ignore their codec chip.

Maybe skip the allwinner chip entirely. Putting some sort of NN inside an ARM soc seems to be in fashion now so I think better options will present themselves.

I suspect the only purpose of this NN is for improving the accuracy of hot word recognition. A standard CPU doesn’t do a great job of it (maybe 90%), the NN has potential to boost that to 97-98% accuracy.

PS – it is not that CPU can’t do it, it just can’t achieve 98% accuracy in near real-time.

This does seem to be for that but I think we’ll see almost every chinese IP camera chip have NNs because of their love for surveillance. Modules like this are apparently already out in the wild – http://www.superic.com/soludetail-278.html

DGP, BGA package too much?

I guess this is about the XR819? It’s not BGA, it’s a QFN… but the drivers and firmware for it are horrible. Like the firmware crashes if the driver on the other end of the sdio bus looks at it wrong. There are some wi-socs based on it on taobao though so maybe it actually works for some people. (shrug gif here).

No, I meant the R329 in BGA. I wouldn’t wish the XR819 on anyone. There are so many better radio modules with drivers that actually work. *glares at OpiZero*

Previous tries (AllwinnerV3) at putting CPU + DRAM into a non-BGA package have had thermal problems. The BGA is better at heat transfer. That is why S3 (BGA) replaced V3.

>The BGA is better at heat transfer. That is why S3 (BGA) replaced V3.

If forget the name but I’m pretty sure AllWinner is selling the V3s as Rxxx something now in the same old QFP package.

V3S in QFP is limited to 1080P30, but the silicon can do 1080P60 and 4KP20. It is the same silicon, this is a thermal limitation. If you try doing 4KP20 the chip will go into thermal shutdown. The QFP V3 can do 4KP20 since it does not have the DRAM die inside generating extra heat. The S3 is in a better thermal package so it can do 4KP20 with the DRAM inside the package.

Then why not a QFP with a thermal pad in the center? I’ve soldered dozens of those in past years. There are solutions other than BGA.

It is easy to get PCB house to assemble now. For example this place will shop for your parts in Shenzhen marketplace, make PCB and assemble it, all for reasonable prices. elecrow. dot com Let them mess with BGAs. That’s what we do.

Some of our engineers will order a board with only the BGAs assembled on it. Then they hand solder the rest of the parts while simultaneously testing their design. Doing it that way makes it easier to find layout errors.

>Then why not a QFP with a thermal pad in the center?

V3s does have an exposed pad. I would have thought the bigger surface area and all the extra metal in the lead frame etc would give it room to dump the heat out.

For more detail you will have to get answers out of SoChip. I do know that the V3S and S3 do not use the same DRAM die. So part of this could potentially be a more power efficient DRAM die in the S3. All I know for sure is that the dies are not the same, they need different init code.

BGA is ok if you get someone else to assemble it/are using a PCB fab a bit better than the cheapest on pcbshopper.com. These less known Allwinner chips aren’t easy to get though. The H3 etc you can buy on taobao and alliexpress but getting something like the S3 was a pain.

Don’t forget Allwinner and also Rockchip SoC sell under other brands too ( not a clue if licenced or just sold off ).

Monkey king = a Rockchip and ZUIKI Z7213 = a Allwinner. Both were found in retro gaming consoles.

I hope this gets some Arduino love.

Does anyone know of upcoming boards based on this R329? Not sure if this supports mic arrays.

Also, @Jean, is it possible to do an R329 vs. R328 comparison when you get more information?

You can have up to eight DMICs. I’d like to see a dev board too, but I don’t know any one building one.

Hi Jon, any news on the R329 ? I still can’t find datasheet or detailed information about AIPU. This chip looks amazing.

I am not sure if this chip ever shipped. It may have been a victim of COVID.