Retro gaming is cool again with products like Nintendo NES Classic / SNES Classic, DIY solutions based on firmware like RetrOrangePi, and the upcoming Atari console  among others. 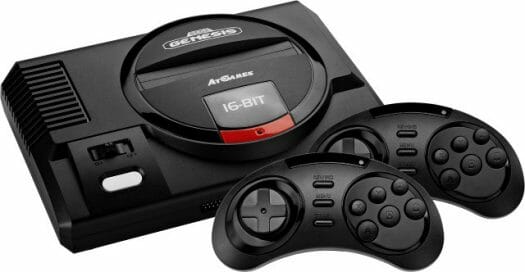 The console ships with two wireless controllers, connect to your TV via HDMI with 720p resolution, and includes a cartridge slot that works with Sega Genesis and Mega Drive cartridges. The console has been out for several months, and it would be an understatement to say reviews are not very positive with titles / bylines such as “do not buy” (partially because the console requires a power adapter….), This Genesis does not do what Nintendoes, or “More like Trashback“.

But what caught my eyes is ETA Prime’s Sega Genesis Flashback HD Teardown And Review (embedded below), which reveals the board is powered by Monkey King 3.6 processor.

A new silicon vendor? My search attempts were unfruitful, but as we continue watching the video and ETA prime connects the box to his PC via USB we find the answer. Monkey King 3.6 processor is actually a re-branded Rockchip RK3036 SoC with a dual core Cortex A7  processor and Mali-400MP GPU, and the system runs Android 4.4. So eventually it could be feasible to add your own game. The actual review is fairly positive except for some specific games (frame skipping), contrary the gaming sites linked above.