Wireless charging has been around for a while, and it usually placing a phone or other device on a charging pad. But back in 2018, Energous started to promote its near-field, mid-field, and far-field wireless charging solutions, with far-field meaning within a room. But so far, they only have released near-field devkits and products.

Singapore based TransferFi Pte has come up with its own wireless charging solution. TranferFi wireless power network (TFi WPN) aims to power sensors up to 55 meters away and specifically targets building and factory automation in order to help companies save on installation and cabling costs.

The solution works with a gateway powering up and receiving data from sensors wirelessly with a range of up to 55 meters.  The TFi Gateway Max Turin-1 covers up to 32 TFi Sense devices via multichannel beamforming supporting up to 16 channels and can be connected to Modbus, BACnet & Web services. The TFi Sense Turin-1 sensor node is powered by an unnamed Arm Cortex-M4 microcontroller and is equipped with a 3-axis accelerometer, a microphone, temperature, pressure, humidity & TVOC (Total Volatile Organic Compounds) sensors. It also includes proprietary encryption & AES-128, and transmit at up to 5 Hz.

The technology is optimized to work in the 860MHz – 940MHz frequency ranges, but TransferFi can also offer the solution in the 2.4GHz – 5.8GHz bands on request. CNX Software was informed about the technology, and a representative explained:

All this is done through patented signal optimization and beamforming algorithms enhanced for long-range of Wireless Power Transfer (WPT) to more than 100m. We’re working on a developer kit which has loads of customization features for different sensors, communication ports, antenna and micro controllers.

I suppose the “Max” gateway is relatively pricey, as I understand the development kit will include TFi Gateway Lite Turin-1 instead which should just support one sensor nodes and have a shorter range. 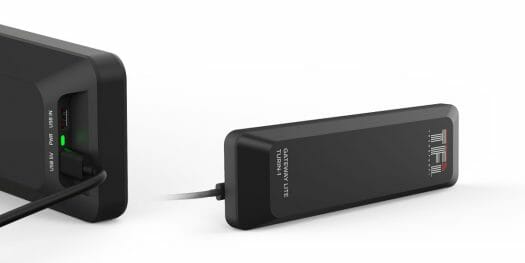 The sensor will be programmable sensor with control capabilities for Home IoT or project. The company did not disclose more information about the kit at this time, but a webinar entitled Introduction to wireless power is scheduled on April 22 at 11 am Singapore time for people wanting to know more.

We also asked the company how TransferFi compared to Energous:

The main difference with Energous is that we are truly long distance with transmission over 24-55m. Focus is on industrial Iot, enabling a digitization of a physical space.

Further details may be found on the company’s website.

Seems like a system of perfect logic built on the foundation of a few flawed assumptions.

In most industrial settings, power is needed just about everywhere. It’s hard to produce anything without it. So I don’t see this “reducing cabling and installation cost by 50%” is a real practical setting.

Wireless communication has limitations in a noisy industrial environment as well.

Efficiency is another issue that is probably being conveniently overlooked.

I suppose this thing will be more applicable in warehouse scenario, where environment is much calmer, but cabling might be trickier (too many moving parts, like boxes and pallets)

Given that radiated energy per surface area decreases with the square of the distance, I guess this uses very directional waves at high power. Seeing how scared people are to have a 4G/5G antenna in their neighborhood, I can only imagine how they’ll be scared to cross this beam that needs to be 300000 times more powerful to reach 55m than to reach 10cm which is already too far to charge a smartphone :-/ Note that quite a number of devices embed small sensors with a small battery made to last 10-20 years by sending occasional measurement. It might be… Read more »

Any idea about the power available for the sensor and the cost? I have to admit I’m quite skeptical, especially once you factor in TX power limits in most bands… I’m also puzzled by the use of omnidirectional antennas in some of the pictures, and even more by the number of variants shown on their website and in the pictures you have here. They even have devices that seem to be using photovoltaic cells… I hope I’m wrong, but this doesn’t quite give much confidence yet.

It would be much more efficient to power devices using waste heat or vibration in an industrial environment.

Things like this do work, but they are terribly inefficient. They also need line of sight to the device to transfer significant power. Just stick with 10 year batteries and you’ll be much happier. A lot of startup money has been wasted chasing long distance, wireless power transfer. Blame Nikola Tesla, he’s the one who started it.