Neil Amstrong of BayLibre recently added ODROID-C4 support to Armbian,  fired up [email protected] on the Amlogic S905X3 SBC, and took a  screenshot of some kind of advanced htop program showing the [email protected] and other processes running.

The program used happens to be BashTop a recently released Linux resource monitor written in Bash and running in a terminal.

Installing the script and running it is super easy: 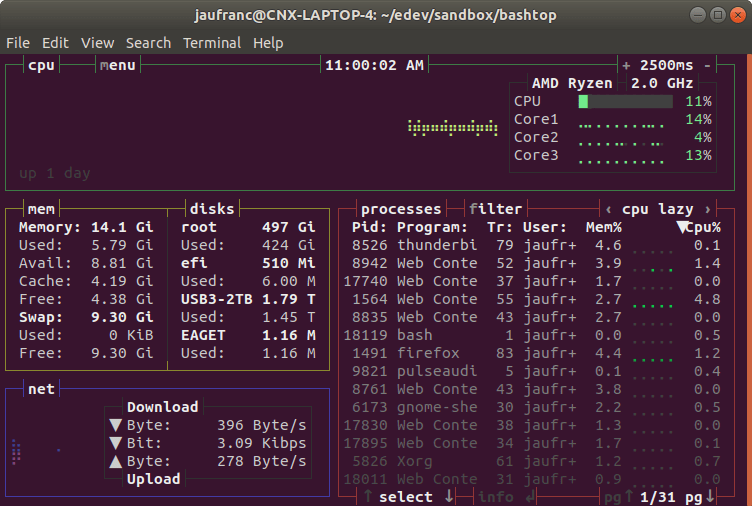 You’ll need at least a 80×25 terminal window, but it looks much better in full screen.

You can also select each individual process to get more information or kill it. If you want to install BashTop permanently on your system, simply copy it in a directory in your path, for example:

yes thankyou, I was missing the network statistics in htop!
I dont like it more for managing running threads, since in htop I can actually click on the tasks and sort columns to select/toggle.
It’s in the Arch linux community and aur repo’s btw

Greetings from another Manjaro user 🙂

Oh, that looks beautiful. Works on my Ubuntu.

I tried on my Synology, but I get:

[email protected]:/volume1/@tmp/git/bashtop$ ./bashtop
ERROR: Bash 4.4 or later is required (you are using Bash 4.3).
Consider upgrading your distribution to get a more recent Bash version.

I wonder what the problem could be? Or what the solution might be? If only the error message were more informative!

bashtop is beautifully laid out and cleverly programmed. It is a good resource for learning bash, and fun to run. However being written in bash means it’s a performance-impacting performance monitor, on many older (incl ARM) systems.