Last June, I reviewed a Ryzen Embedded SBC with Windows 10, and the USB hard drive I normally use for review had all sorts of problems including very slow speeds and/or stalled transfers but no error messages.

Last week, I tried again by installing Ubuntu 20.04 on the same Ryzen Embedded SBC, and the USB hard drive had troubles again, so just assume there were some hardware incompatibility issues between the SBC and the drive, and there may not be a fix or workaround. 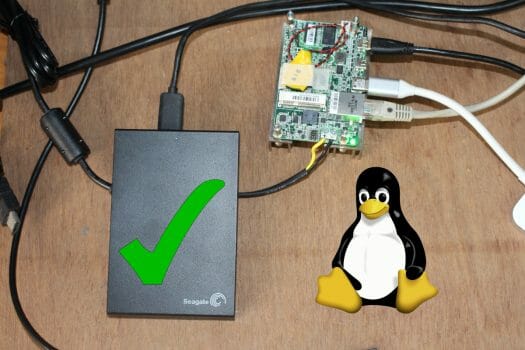 Sometimes, it’s indeed a hardware issue with the drive getting too many bad blocks, and if that’s the case, and the drive is still under warranty you can return it and get a fresh new (or refurbished) drive for free. But that drive was still working with my laptop getting around 100MB/s.

So I ran out of ideas until numero53 commented he had similar problems with many USB-SATA adapters, and the trick was to disable UAS (USB Attached SCSI) which in theory you’d want to improve performance. The problem was reported by Raspberry Pi and ODROID users, and you’d normally get error messages that look like that:

I did not have any such messages, but I still tried to disable UAS on this particular drive with little conviction it would work. First, we’ll need to find the USB VID/PID for the adapter:

Now we can create a file to blacklist the drive/adapter in order to prevent the UAS module to load for this drive:

After a reboot, we can see the drive was blacklisted:

Let’s see if that fixed my issue by running iozone storage benchmark:

It could write a  1GB file at about 90+MB/s. Pretty much normal on this drive. Issue fixed! The ~2GB/s read numbers are clearly influenced by the cache…

It’s apparently quite a common problem with Seagate (VID: 0x0bc2) and Western Digital (VID: 0x1058) USB drives, and Thomas Kaiser just blacklisted all such drives in Armbian by default a few years ago.

OK, so we’ve found a workaround in Linux/Ubuntu. But what about Windows 10, since I got the same problem here. There’s no obvious solution that I could find. There’s uaspstor.sys file in the %WinDir%\System32\drivers folder that is the USB Attached SCSI (UAS) Driver for Windows 10. But it’s not used directly by my drive.

I suppose it might be possible to try to move/rename drivers’ files until the issue is solved, but it’s not ideal since other drives that actually work properly with UAS would also be affected. I looked for methods to blacklist UAS for specific drivers in Windows 10 just like we just did in Linux, but there doesn’t seem to be any solution. If you do have a workaround, please do share.

> The ~200MB/s read numbers must be influenced by the cache…

In fact it’s 1.9GB/s (1916998kB) and this is most probably due to your filesystem being exFAT handled by FUSE and all FUSE filesystems avoiding direct I/O so filesystem benchmarks show usually how fast the OS can read from the filesystem cache. The following call shows more realistic numbers:

I ran the test on an NTFS partition, but if I remember correctly it also avoid direct I/Os.

> I see in most cases UAS to be slower than BOT

With a huge variation of different USB-to-SATA bridges or just a few or even one?

Not talking about your results (too hard to read without proper formatting and without being able to look at raw data usually not worth the efforts anyway) but about methodology. If you don’t control what’s going on in the background you’re just generating numbers without meaning. I always run at least sbc-bench -m (monitoring mode) in parallel when doing any sort of benchmarking and afterwards I always check dmesg output for anomalies (like e.g. bus resets or similar stuff). Especially cheap consumer SSDs implement write caches and once this capacity is exceeded they get dog slow (I measured below 60… Read more »

If you click on Read More, the formatting is clear enough. I understand what you mean… BUT I’m not trying to reach a state of pure synthetic benchmark to compare X vs. Y. I’d rather want to see what mode is best in regular production environment. If during a synthetic benchmark X is better than Y, fine. But if this is never going to happen in production, all the synthetic benchmarks of the world are useless to me. The reason I started to test UAS vs BOT is because my DB app was running faster with BOT compared to UAS.… Read more »

Disassemble the disk and check out what chip is used?

Older Seagate USB3 disks use an ASMedia ASM1053, since end of 2014 ASM1153 or JMicron JMS577. But regardless of the chip the firmware is the problem since it’s never ASMedia’s or JMicron’s standard firmware.

I read this was a faulty implementation of SATA over USB by Seagate, but my memory is bad.

This is a super annoying problem and disabling UAS didn’t fix for my current seagates that i need to access.

Had to buy a damn laptop for them.

Thank you for this article – it helped me to get my ADATA SE800 work on my AMD ThinkPad T14s. I think that you’re right that it isn’t possible to just blacklist a specific drive on Windows . Replacing uaspstor.sys with usbstor.sys (located in C:\Windows\System32\Drivers) solved the issue for me. This removes uasp support for all devices, but for me it doesn’t really matter, because I rarely use Windows and I still get decent read speeds without UASP (around 250MB/s when copying a video file to my laptop). Still, it’s weird that it works with UASP both on my desktop… Read more »