You’ve probably already watched a video featuring Boston Dynamics Spot, a headless robot dog used in various industries including healthcare, public safety, construction, oil & gas, etc.. It could also be yours if you wanted a robotic pet dog at home, as long as you have $75,000 US to spare.

Petoi Bittle looks eerily similar, but it’s much smaller as it fits in your palm, and could be yours for $225 on KickStarter as a kit to assemble yourself that you may get as soon as December. Bittle robot dog is designed for STEM education and can be programmed using the Arduino IDE, Python, or even Codecraft visual programming IDE. 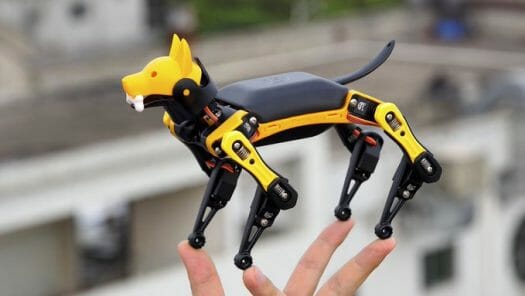 The robot can work by itself, but if you want a smarter dog, simply connect a Raspberry Pi 3 Model A on top to make it better at analyzing more sensory data, and enable Internet connectivity and some light AI workloads. Larger sized Raspberry Pi boards can also be used, but not recommended because of the small size of the robot. I suppose Raspberry Pi Zero W would be a nice fit as long as mounting is not an issue. An ESP32 board is also being worked on, but won’t be available in the Kickstarter campaign. Petoi also has a Github account, but for now, only the resources for their Nyzzle robot cat are available.

If you’d like to learn more about the project or future plan, you can check out Charbax’ hour interview with RzLi, the developer of both Bittle and Nybble.

They should work with friendlyelec on a all in one control board.