The latest iteration – PixelBlaze v3 – is based on ESP32 WiSoC and comes in two variants: PixelBlaze v3 Standard with headers and PixelBlaze V3 Pico in a much tinier form factor (33.3 x 11mm) with both models supporting live-coding via a web interface.

Both boards have 1.4MB flash reserved for pattern storage with  100 patterns with previews, preloaded with dozens of patterns, and annotated examples. Each pattern supports 256 global variables, 256 stack variables (recursive functions supported), and 10,240 arrays/elements.

Ben Henke also offers a Sensor Board with a 3-axis accelerometer, an ambient light sensor, and 5 extra analog inputs, Output Expansion Board in order to simplify wiring and power distribution for several strips, panels, or strings of LEDs, as well as 8×8 LED Matrix to get started. 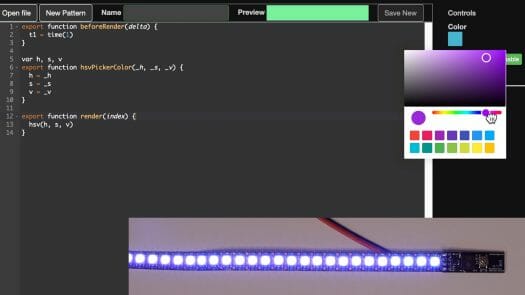 The board can be controlled from the web interface shown above to create patterns, select colors, and update them on the fly using JavaScript. You’ll find the API documentation on Github (see README.mapper/expressions files) together with EAGLE schematics and PCB layouts for both boards.

With the demo patterns, Pixelblaze V3 generates 48,000 pixels per second on average and can drive up to 5000 pixels. It’s also possible to combine multiple Pixelblaze controllers and synchronize them with Firestorm centralized control console that can run on a Raspberry Pi or other SBCs or computers.

PixelBlaze v3 has recently launched on Crowd Supply and raised over $10,000 in less than a week. Rewards start at $35 for Pixelblaze V3 Standard or Pico, and up to $132 with all boards listed above. Shipping is free to the US and will depend on weight to the rest of the world. Rewards are expected to start shipping in mid-February 2021.