[Update: The information from Shelly about a new “Cortana M3” processor is incorrect, we’ve been contacted by Silicon Labs, and there’s no Cortana M3 microcontroller from the company, Shelly is just using one of the company’s Cortex-M3 based WiFi solutions (SoC or module). The article remains unchanged]

WiFi is one of the most convenient ways to connect IoT devices as it’s omnipresent, low-cost, and the range is ideal for the typical smart home. That’s all good until you start to power the device with a tiny battery, as WiFi consumes much more power than Zigbee, Z-Wave, or Bluetooth.

Over five years ago, Rockchip RKi6000 WiFi SoC promised Bluetooth 4.0 LE power consumption numbers allowing coin-cell powered WiFi devices, and there were some demos the following year, but I’ve yet to see a consumer device based on the solution.

This brings me to the main topic of this post: Shelly Motion, a soon-to-be-launched smart motion sensor said to be powered by Silicon Labs Cortana M3 Cortex-M3 WiFi microcontroller, and capable of offering over one year of battery life while connected to WiFi thanks to an ultra-low power consumption of less than 300 uA. The company explains this is equivalent to the power consumption of Silicon Labs Zigbee, Z-Wave, or Bluetooth chips, and Cortana M3 embeds the most-efficient WiFi radio in the world. The one-year battery life is based on a real use case of 6 hours of motion detection a day, and without motion detected battery life would be close to 5 years while being always-connected to WiFi, and 3 years with 3 detections per day. The battery capacity is 7,000 mAh.

Shelly Motion also supports near real-time response with under 200ms response time, 200 levels of sensitivity, earthquake detection, sunset/sunrise scenes, pet detection (rejection), and more. It can communicate with the home automation gateway or the cloud over MQTT, CoAP, REST using TLS encryption. The new device was introduced at IFA 2020 together with Shelly 4Pro Plus” 4-way relay for DIN-mounting.

You must think there must be tons of news about Silicon Labs Cortana M3 all over the web, but at the time of writing, it’s close to impossible to find any information, except on Shelly’s IFA2020 product page where there’s plenty of information about the motion sensor as one would expect, but very limited additional details about Silicon Labs’ latest wireless microcontroller. 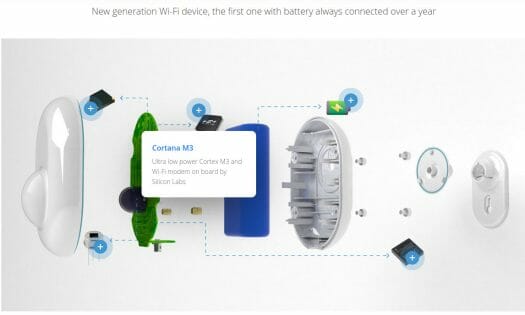 So we’ll have to wait a little longer for the official announcement. As you probably know, Cortana is Microsoft’s voice assistant, so I would not be surprised if Silicon Labs has to change Cortana M3’s name to something else.

So it’s both good and bad news because I’m still convinced that wifi is not very adapted to connected objects (congestion problem, consumption problem, problem of available IP address, hacking problems….). But for simple projects, without a gateway, it will remain the most requested option!

Hopegully the Connected Home over IP project aims to remidy that.

Great achievement, but pretending they achieve the same power efficiency as BLE or Zigbee is just false.

300 µA is not a typical power consumption for a BLE or Zigbee device, it’s probably at least 10 times more.

Which explains the need for a pretty large 7000 mAh battery, we’re quite far from a coin cell!

Also Zigbee usually has far better range than Wi-Fi in similar conditions. It would be interesting to compare in their situation.

The motion sensors are good to make low energy devices because it is in fact the sensor that will wake up the wifi chip only when necessary.
Still a great news to have low consumption wifi chips because the energy consumption of shelly (or any wifi plug) is very bad : with 4 plugs (4x3W) it’s like your provider box !

SI WGM110 is over $10 in quantity so these are not cheap. A much better and more cost effective model is ESP32 based light switches/dimmers using mains power for the wifi/BLE. Then use BLE based motion sensors. You can make BLE motion sensors than will run a decade on a coin cell. The light switches pick up the low power BLE signals and relay them onto the wifi network. This model works great for motion sensors, door/window sensors, temp/humidity sensors, etc. Now you can make the sensors using 50 cent BLE chips. This is 300uA, the TI design is 1.65uA… Read more »

Shelly product can work without cloud, now just wait and see this .

I love the Shelly stuff, all together they complete my smart home!

Another great device from Allterco in the Shelly lineup, at least great on paper until we’ll play with it and we can give our honest opinion ? But nevertheless the new chip is very promising for the wifi battery operated devices and the Shelly Motion it will be the first of it’s kind, I hope more other devices that suffer now it will take advantage of this new technology and Shelly it will continue to be a leader on this market. The biggest concern I have it’s the price since it have a big battery inside and not so cheap… Read more »

Awesome product, can’t wait to get my hands on it!

For sure it will be Game changer in battery operated, WiFi devices.

Battery WiFi operated device, with low power consumption of less than 300 uA and battery life for 3 years with 3 detections per day from one side, and near real-time response with under 200ms response time, 200 levels of sensitivity, earthquake detection, sunset/sunrise scenes, pet detection (rejection) on another would make this device really interesting for the consumer, satisfying wide range of demands and use cases.

Congratulations, and just move fast forward to have it available on the markets.

I think it’s gonna be a great product overall, their devices have not disappointed me so far & my house is filled. We’re all waiting impatiently