We previously wrote about smart lock systems that allow you to open your door with the help of your smartphone. Products covered including Xiaomi Sherlock M1 that only works with specific doors/locks, and K1 smart lock box that stores your keys in a rugged box meaning it works with all door mechanisms, but it does not seem particularly secure to me.

BOSMA Aegis Bluetooth & WiFi smart deadbolt looks to potentially a more secure solution as it should work with any door, and complements your main lock which you may want to use when you are not at home for longer periods of time. 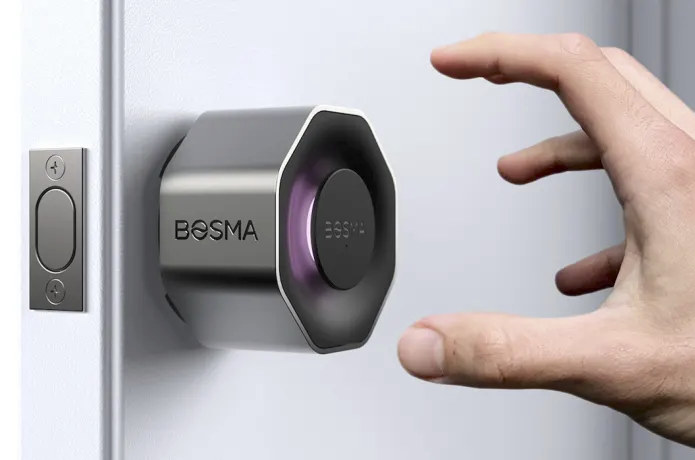 If you need something a bit more advance you could add BOSMA Sentry smart doorbell with a fingerprint scanner, Full HD video camera and two-way audio support. Basic AI is built-in with support for face detection, package delivery and/or theft notifications.

Wi-Fi and Bluetooth are not known to be the most secure, and that’s also why having a separate manual lock is still a good idea. The smart deadbolt is a convenient solution for shorter trips like going shopping. Note the devil is in the details, as the older Kwikset Kevo Bluetooth deadbolt – from an unrelated company – has pretty poor reviews on Amazon.

BOSMA launched Aegis and Sentry on Indiegogo a few weeks ago, and the company has already raised close to $150,000 so far with 18 days to go. Rewards start at $69 for Aegis Smart Deadbolt only, and $149 for a combo with Aegis and Sentry smart doorbell. Shipping is free to the US but adds $15 to the rest of the world, and backers should expect their reward(s) sometimes after September 2020.

Bah I really hate such devices. Not only do they serve exactly ZERO purpose nor do they solve ANY exist problem, they CREATE lots of new classes of issues.   When designed by developers they have no idea how to make something mechanically sound and solid resisting basic attacks. When designed by lock makers, their code might be totally vulnerable to basic attacks. And I’m speaking about the best case because there’s no reason not to have both at once.   Then you have the usual problems that come with using such devices. Lose your registered device and have to… Read more »

I guess they missed that movie where Jack opens the door with an axe.