Earlier this year, Seeed Studio introduced the Grove Beginner Kit for Arduino that included the Arduino UNO compatible Seeduino Lotus board placed at the center and ten pre-wired and detachable Grove modules to get started with sensors on Arduino with no cabling whatsoever apart from the USB cable.

Arduino must have seen and liked the design, and Seeed Studio has collaborated with the Italian company to create the Arduino Sensor Kit Base with a very similar design, but with a twist as instead of an all-in-one platform with modules and an Arduino board, it’s a very large shield that seats on tops of Arduino UNO. 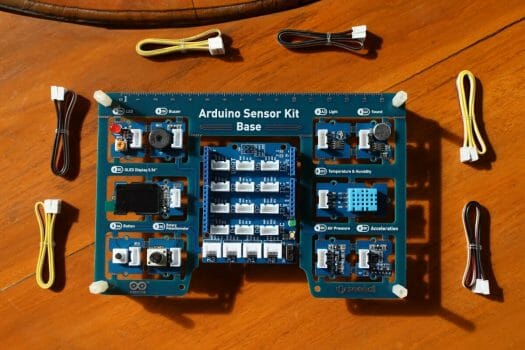 The Arduino Sensor Kit base includes the following: 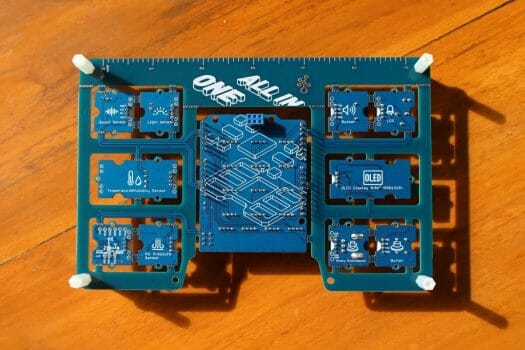 As you can see in the photo above, the Arduino headers are exposed as well as the 6-pin ICSP header in order to connect it to the Arduino UNO board. If the ten sensors included in the kit are not enough, you can always add other Grove modules, or an Arduino shield to further expand the platform.

Arduino will provide the Arduino Sensor Kit Library wrapper that contains links to other libraries related to certain modules such as the accelerometer, air pressure sensor, temperature sensor, and the OLED display. There’s also be an online platform with ten lessons to learn how to use the included modules. 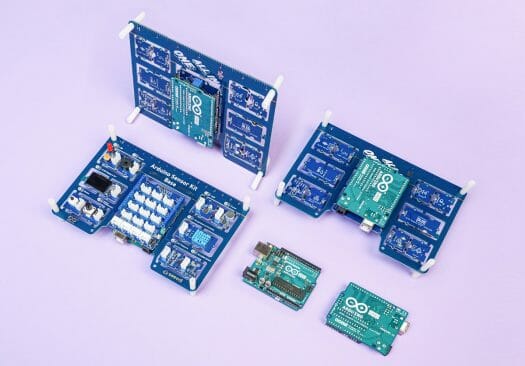 Arduino Sensor Kit Base is sold for $23 on Seeed Studioor the Arduino Store, where you’ll also find the $38.70 bundle kit with an Arduino UNO inside the package.

Normally I stop reading as soon as I see “Seeed Studio” (“Seeed Studio … the company that makes the profits on shipping”) … but I must say I like this board.
But Seeed Studio … so I won’t buy.

Consider the Arduino store. They ship from Italy. Free shipping from eur 95 onwards, no idea how much shipping is for smaller orders