We found NanoPi R4S board in a work-in-progress Wiki last month. The tiny single board computer is designed for headless applications but comes with much better specifications compared to similar boards with a Rockchip RK3399 hexa-core processor with up to 4GB RAM, dual Gigabit Ethernet, and USB 3.0 ports.

At the time we had limited information, but FriendlyELEC has now started selling the board for $45 and up, together with an optional metal case for a fanless operation that should ensure very good cooling. 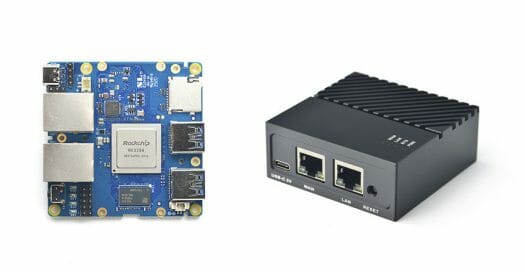 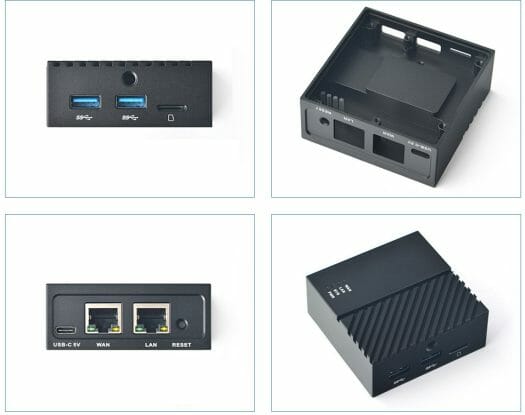 We can see the enclosure is designed in such as to be in contact with the Rockchip processor as it should be. There are also conduits for the four LEDs. We also know about software support, and as expected, the board officially supports Ubuntu Core-based FriendlyCore 20.04 64-bit with Linux 4.19.111 and OpenWrt-based FriendlyWrt 19.07.4 with Linux 5.4 both of which can be found on the Wiki together with other developer resources. It’s also possible Armbian will work on adding support for NanoPI R4S.

Rockchip RK3399 is known for not being the most efficient processor around, but surprisingly the combo NanoPi R4S plus metal case stays much cooler than the company’s earlier NanoPi R2S metal case kit based on the more power-efficient Rockchip RK3328 quad-core Cortex-A53 processor. FriendlyELEC used their own stress test script for the test. 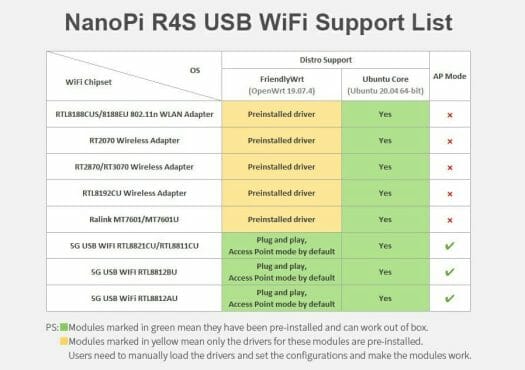 NanoPi R4S does not come with WiFi, but the company has made sure drivers for the most popular USB wireless adapters are present in both Ubuntu and OpenWrt, and also listed the one suitable to be used as access points, named dual-band USB dongles based on RTL8821CU, RTL8811CU, RTL8812BU, and RTL8812AU.

If you’re interested, you can now buy NanoPi R4S directly on FriendlyELEC store for $45 for the bare board with 1GB RAM, or $55 with 4GB RAM, while the metal case adds $14. Alternatively, you’ll find those on Aliexpress if you prefer.

What this copper for? We want the speed of light!

> FriendlyELEC used their own stress test script for the test

Which uses lightweight dd if=/dev/zero of=/dev/null bs=1M as many times in parallel as CPU cores are present which is a rather weird definition of ‘stress’.

Wonder if LPDDR4 will work properly this time?
Got a NanoPI M4V2 which is basically unusable.

And have you spoken to Friendlyelec and where you bought it from.

Nope. I consider it a lost cause and bought a M4B instead. I bought both from the official store.

It is supported by Armbian. Have you tried it?

And most probably the whole magic is in u-boot.

In other words: for Armbian to support the R4S same u-boot config will work and the only challenge is maybe a driver module a bit too old for the RTL8111H in Rockchip’s ‘legacy’ 4.4 kernel. With mainline kernel everything should work out of the box once DRAM initialisation is ruled out.

Last I tried, mainline U-boot SPL completely fails to initialize the DRAM.
Using vendor dram blob gets you working DRAM, with a big warning stating that the training parameters are out of spec. And the board normally crashes within a day.
This is running mainline kernel.

At the same time, an ROC-RK3399-PC sitting next to it runs perfectly.

Chen-Yu, I would give an Armbian M4v2 image a try for some time but not focussing on a ‘load test’ but checking stability at low loads and load peaks in between (I remember there were also reports of DVFS voltage ramping up instabilities… but to be honest I’ve lost track in this area)

Anyway I loaded Armbian and am letting it sit idle with default settings, such as “ondemand” cpufreq governor. Unattended-upgrades should make the load spike a bit each day. We’ll see what happens.

Try setting governor to performance. There seems to be an issue with differential governor. I use mostly Armbian legacy on it and it’s 100% stable. For mainline I need to set performance governor, then it is also 100% stable for my tasks.

That would likely increase the idle temperature.

For sure. If you run into instabilities with mainline kernel most probably it’s related to DVFS settings.

I see Armbian bumped the voltage for the two lowest OPPs. Will try that with mainline.

> That would likely increase the idle temperature.
His suggestion is not to do that forever but to verify if it addresses your stability issues to confirm the root cause could be in DVFS OPPs.

Looks like U-boot mainline got fixed. I guess I’ll give the board another shot. 🙂

Unfortunately with mainline U-boot and ATF, the board doesn’t get past the boot phase. After the kernel starts to load, one or multiple mem aborts happen with “unable to handle kernel paging request at virtual address xxxxx”.

Could me an interesting board for “Pure Open Source AI Stack with Panfrost”:
https://www.youtube.com/watch?v=Fp_rcL02DRo&ab_channel=Collabora

(assuming that the Mali is usable in this design)

We already know that there’s something seriously wrong with FriendlyELEC’s two RK3328 boards.

I repeated the lightweight thermal test they provide (running 4 times dd in parallel from /dev/zero to /dev/null with bs=1M) on another RK3328 board with just a small heatsink on top.

That’s an increase by 16°C ending in the same thermal region where R2S starts at idle.

I think it’s a good idea to stop providing small steps in RAM size. Either people want a price and they use 1G or they want RAM and they use 4G. the difference is small enough to ignore the 2G step.

I like this enclosure. It’s still missing a console port but the location of the 3-pin header allows to design a small board to fit on it, that would be accessible above the USB-C connector after drilling a hole.

So with upcoming RK3566 devices you vote for only 1G or 8G and nothing in between? 😉

No display out? No emmc? Not worth my time.

You don’t need this with two GbE LAN. It seems that what you need instead is the good old Nanopi Neo4 which is roughly at the same price.

just bought one from taobao

For sale on Aliexpress too.

I have been wondering…these devices are sold in volume now with a case, they’re essentially a product instead of your legacy devkit. It really really should be CE/FCC certified, it’s a one-time cost for the vendor to play safe, also I’m sure this will encourage more DIY to buy them in volume. Keep selling without a certificate, someday the vendors will get into legal trouble I feel.

Raspberry Pi for example, has all the certifications: https://www.raspberrypi.org/documentation/hardware/raspberrypi/conformity.md

so is some beaglebone board.

FYI the case option on the official store seems to have disappeared.

Just noticed I forgot to add the links to the store, and instead there’s no more case on the official store, but it still there on Aliexpress. I received a sample yesterday with the metal enclosure.

I wrote an email to their sales account asking about the metal enclosure.
For me it’s slightly better to use their official store than going through TaoBao.

I also asked FriendlyArm for the metal case and they responsed on Jan 13th that “The case is unavailable. Our factory is manufacturing them for us and new stocks should come in end of February. The Chinese new year is Feb 12, and factories have begun to have holidays one after another”

Any suggestions for how to remove the metal case? I want to get at the serial port pins but this thing is tight as a drum!

Hi Tim, I could open it without much trouble @ https://www.cnx-software.com/2020/12/13/nanopi-r4s-sbc-preview-with-openwrt-and-ubuntu-core/

After removing the screws, I’d suggest using a suction cup, the type of thing that’s used in the bathroom or kitchen to hang clothes.

I can’t seem to get a suction cup to maintain suction, the various bumps and pins on the board seem to prevent that. I will keep trying!