We first wrote about Balena EtcherPro in December 2018, as a relatively low-cost multi-SD card writer, designed by Balena for people who needed to flash several micro SD cards, USB drives, or boards.

At the time, mass production was scheduled for Q2 2019. But it took a bit more time than expected, and the company is only now taking pre-orders for the device with a $50 deposit, and $990 price tag excluding VAT and shipping. 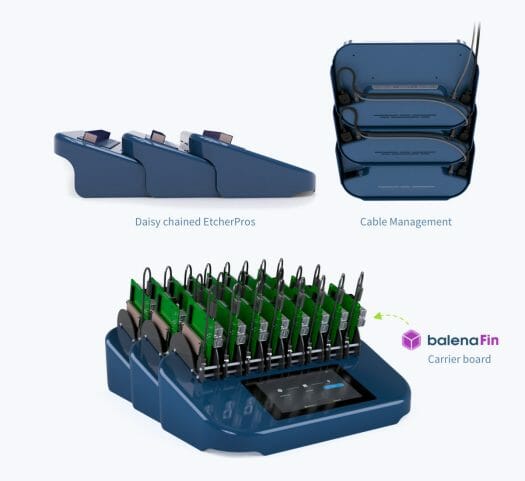 The tool runs the latest version of Etcher software (automatically updated) and allows people to flash images to sixteen different targets from an online image, or fifteen targets while cloning a physical drive or board.

In case you wonder how competitive is the $990 price tag, it is over $100 cheaper than the 1 to 15 model from Systor sold for $1115 on Amazon. But the latter does not support USB drives nor development boards, and does not offer a  computer connection allowing for online sources.

Not all features but maybe getting there?

It looks USB only, although people could still add USB card readers. Maybe I’m unlucky for the ones I’ve used all died within one year.

It’s a bit odd they keep the software secret, and we need to send them an email to find out.

> It looks USB only

This Aliexpress thing is just a plastic case with some cascaded USB3 hubs inside.

I have been wondering since the product PR in Dec’18: can’t we just use powered usb hubs instead of this $$$ “innovation”?

What’s special about burning the same image on multiple USB/ sd cards at once?

For people having hundreds of devices to update this can save time. If you were to pay somebody to do it that would also save money/human resources.

Now if these would give you of their industrial cascaded USB to test long term.

I’ve asked them about the software out of curiosity:

Did you buy it before from my company.

The software will be free with the goods if buy from us.

This is surely a great device. But, you know… What are the cheaper alternatives?

For very basic usage – When you do not even have a USB to TF/SDcard adaptor
The Raspberry Pi Zero without a sdcard connected to a Raspberry Pi Desktop x86 or FEL mode on Orange Pi’s – but you would still need many USB ports
https://gpiozero.readthedocs.io/en/stable/pi_zero_otg.html
https://linux-sunxi.org/Xunlong_Orange_Pi_Zero

I do not know about the RPi but I feel like USB speed may be a bit low in FEL mode for this kind of task. If I did not get it wrong, write speed do not reach above even 5 MB/s according to this table.

Yes, write speed for RPI referenced below, offers some tweak (sd_overclock )  and possibility of even adding another sdcard interface over SPI

I guess Mark talks about ‘clustering’ a bunch of inexpensive SBC that boot via USB so that their internal TF card slot and USB host ports can be used to flash images. Though those cheap Allwinner SBC are limited to ~23 MB/s (SD/SDIO high speed mode) and USB2 … and the image has to be taken from somewhere.

Oh I see now, thanks. That would be a similar solution like the one you have recommended, which is using dcfldd, right? Not bad but it would not be anywhere near EtcherPro. We get what we pay for, I assume? 🙂

> the one you have recommended

Well, dcfldd wasn’t exactly a recommendation since I never figured out how to get verify to work. Was more of a hint in a certain direction 🙂

Search this blog for ‘dcfldd’ for example.

Though I’ve learned the hard way to not trust that much into USB3 hubs and I also think ‘verify after write’ is mandatory for this use case since if flashing sticks/cards doesn’t fail completely you can waste an insane amount of time hunting what appears to be ‘software bugs’ that are in reality just a few random bit flips that occurred while writing to media (BTDT several times until I learned to love Etcher back then – today there’s also USBImager).

A bit expensive though. Nice to have a screen, but not really necessary. If they would deliver something for 80 USD and integrate it in their software, this would be fine. But this is just too expensive.

So it runs the same few hundred MB balena adware-spyware etcher you can download to your pc? Nice to have a $1000 device to show me ads…

and most likely violates the gdpr in the EU too

Due to internal necessity, I built several 64 port version of this that can do 100MB/s to each port. And it cost much less than this and powered by shell scripts.

this is an outrage lol. one grand for a card duplicator? no wait, it only works with their software. Yes, the amount is right, 1 + 3 zeroes, it’s not that somebody slipped in an additional zero by mistake. And the utility of this? none. Nobody, I say NOBODY has hundreds of devices wandering at home let alone in a business (if you happen to rely on sbc in a production environment). The cases where this device may be useful target the 0,01% of the users, even less. I can only think about a person who is in charge of… Read more »

> Nobody, I say NOBODY has hundreds of devices wandering at home let alone in a business

In other words: you have no idea what the real business of balena is…