[Update November 2016: If you don’t like USB Burning Tool or don’t have the necessary USB cable, you can flash Amlogic IMG firmware to a micro SD card instead]

In the first few years when Android TV Boxes/mini PCs started to hit the markets, in the 2012-2014 period, online firmware update was inexistent for the vast majority of the boxes, and if you wanted to update your firmware you had to use some windows tools like USB Burning Tool for Amlogic, AndroidTool for Rockchip, or PhoenixUSBPro / PhonixSuite for Allwinner platforms. All those tools have poor design, for example the window is not resizable, so it’s impossible to your an old netbook (1024×600 resolution), and then you have to install drivers which is easy, for after detection of the box may be hit and miss, and you have to follow a procedure with the right power sequence with a USB cable connected to a USB OTG port (not always properly marked) and the recovery pin hole or button. It’s taken me close to 4 hours in the past to update firmware through that method switching between USB ports and computers to find out what may be wrong… Luckily in recent years, many devices are now supporting OTA firmware updates, or an easy offline update procedure using a micro SD card or USB flash drive. That means most people should not need to torture themselves using such terrible tools and procedure, unless your TV box is somehow bricked, in which case Windows tools, or their Linux equivalent, are required.

I’ve writing about this because Rikomagic must have been nostalgic and decided not to provide OTA firmware update, and only distribute MK22 TV box firmware as an IMG file for Amlogic USB Burning Tool, both of which can be downloaded on Rikomagic download page. Even though I must have had to use such tools for nearly two years, I was naively expecting it update the firmware in a few minutes, since I used such tools extensively in the past. I was wrong, and I did managed to flash the firmware after two hours, most of it due my own mistakes, as I forgot some of the caveat, and did not read the complete instructions. So I’ll report my experience in case it can help somebody.

The first challenge was to find which one of the USB ports is the OTG one, as there are three, and no specific markings. At first, none of the ports would be detected due the wrong recovery sequence as explained, but I eventually found out it was the lonely USB port on the side, on the left of the micro SD slot and recovery pinhole. 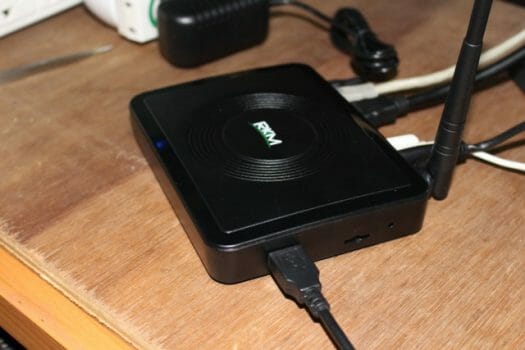 After that I fired up a Windows 7 virtual image through VirtualBox, and installed USB Burning Tool and drivers by clicking on setup_v2.0.5.15_build7.exe downloaded from Rikomagic website. The installation went smoothly, but after enabling “Amlogic” device in Virtual Box, it would report the device is not supported, so I removed the drivers and reinstalled them, and I could get “Worldcup Device” in the Device Manager.

Good, now I can start USB Burning Tool, change the language to English in the program, and the TV box is detected, so I loaded the firmware file (File->Import Image… RKM MK22_161031.img), hoping to get ready to flash the firmware, but I got another error message “Get key failed” with the mac = 0 on the right window when click on Start button… Very odd.

But I’m not the only one with the issue, and for some reasons, Amlogic decided to add a license to their factory software… Hard to understand why, but I should definitely have read the provided “MK22.MK06 Software installation intructions-161013.doc” manual, as it explicitly states to

copy the folder”license” to the path when you set by this step. For example: I set C:\Program Files (x86)\Amlogic\USB_Burning_Tool

And there’s indeed a license folder in the downloaded file from Rikomagic, so I copied the directory to C:\Program Files (x86)\Amlogic\USB_Burning_Tool, overwriting the current license directory, and started USB burning tool again. Hmm… same “get key failed” error… Should I reboot? Let’s do it, but same error again after reboot.

So I decided to uninstall everything, and start from start with the drivers and USB Burning Tool, and made sure I copied the license directory before starting USB burning tool. After which I started the program, loaded the firmware file, click on Start button, and after just under 7 minutes I had managed to flash the firmware! Woohoo!

That was a painful experience. So while there’s a case (firmware recovery) for such tools and images, end users should not be asked to install the firmware through that method. It’s complicated, and the default settings wipe out your data and apps.

Would this of helped sort out the problem. ? http://chinagadgetsreviews.blogspot.co.uk/2015/04/how-to-unbrick-any-amlogic-devices.html

Amlogic IMG files can be burn using only USB flash drive or SD card as bootloader supports usb/sdcard burning (on M8 – newer sdk-s and on all S9xx). Things you need is aml_autoscript, aml_sdc_burn.ini and IMG file to be in root of sdcard/usb. I’ll write article on how to do it on my site and will provide aml_autoscript for both usb and sdcard burning because they use different command and not all people can create these files. Will post another msg here when article is up. Flashing is slower than recovery or USB burning tool but it works 🙂

@Theguyuk
I think that tool is for “OTA” firmware, but “USB burning tool” firmware.

@JustMe ROMS
Now that you tell me, I can remember it’s possible that way. I also remember not all USB ports are made equal, and when I used that method on some TV sticks I had to try multiple computers to find a port that would deliver enough power for the thing in order to upgrade the firmware.

Stane1983 : Amlogic IMG files can be burn using only USB flash drive or SD card as bootloader supports usb/sdcard burning (on M8 – newer sdk-s and on all S9xx). Things you need is aml_autoscript, aml_sdc_burn.ini and IMG file to be in root of sdcard/usb. I’ll write article on how to do it on my site and will provide aml_autoscript for both usb and sdcard burning because they use different command and not all people can create these files. Will post another msg here when article is up. Flashing is slower than recovery or USB burning tool but it works… Read more »

You don’t even need the aml_autoscript, just the aml_sdc_burn.ini (which you can extract from the img file) and the aml_upgrade_package.img file itself on a sd card. I put some simple c code on freaktab to extract all the files from the img file.

@Chris
Sorry I think there was some sort of error during copy and paste of the serial output above. Parts of the log are missing, maybe due to parsing by the message board.

Chris :
@Stane1983
You don’t even need the aml_autoscript, just the aml_sdc_burn.ini (which you can extract from the img file) and the aml_upgrade_package.img file itself on a sd card. I put some simple c code on freaktab to extract all the files from the img file.

Disregard the above it appears you need either aml_autoscript or u-boot on the sdcard. I am working on porting amlogic u-boot to current version and apparently had remnants of it on my sdcard without realizing it.

Where is the link to freaktab or the tool. Flashed a qbox firmware on a eny box nowbthe device isn’t recognized on the pc anymore. Do i need to extract the files of a qbox image or a eny image later for the bootable sd?

Just finished testing and writing up the process. It’s at:

The greatest problem that I find is not with regards to the tool (although the licencing thing is rather silly) but the physical procedures that you often have to go through, which can vary from box to box, even when some have the same type of SOC onboard. The pinholes in the base or reset buttons in the AV ports are just plain stupid. At least with something like the TX5 Pro, all you had to do was fire up the tool and then just plug the USB cable in off it went. No need for any overbearing procedures, some… Read more »

@Stane1983
Have you already written about it? Or is it just the same as Chris method?

@Chris
Somehow that method is not working for me. I’m using a USB thumb drive.
The toothpick method will just show me the recovery menu.
If I don’t use the toothpick it will just boot normally.
[Update: Using a micro SD card fixed the issue… The update does not complete, but it must be another issue]

I’ve written a guide to create bootablke SD card in Linux or Windows based on @Chris instructions. See http://www.cnx-software.com/2016/11/19/how-to-create-a-bootable-recovery-sd-card-for-amlogic-tv-boxes/

“But I’m not the only one with the issue, and for some reasons, Amlogic decided to add a license to their factory software… Hard to understand why, but I should definitely have read the provided “MK22.MK06 Software installation intructions-161013.doc” manual, as it explicitly states to”

IMHO
This is a license for MAC ‘ (allowed list). Each manufacturer is allocated a specific range and the license describes this range.

in my android tv box flash another rom after didn’t connect to pc Please help me.
ans start android Zoom the Screen An not open properely and colure are yellow,

Thank you Jean-Luc, this worked well for me, in combination with setting the temperature range to 10-90.

Cheers for posting your findings online.