WiFi 6E is a new standard using the 6 GHz unlicensed spectrum to expand the bandwidth available for Wi-Fi. We previously covered some embedded boards with optional WiFI 6E cards, but so far, we had not seen any consumer-grade WiFi 6E routers.

This about to change, as Linksys unveiled the AXE8400 WiFi 6E router at CES 2021, which the company claims is the world’s first WiFi 6E router. The router is based on Qualcomm Networking Pro 1200 SoC and can achieve up to 8400 Mbps speed. 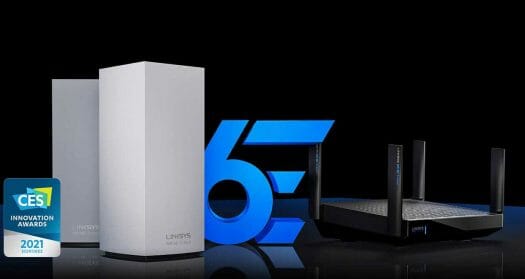 The company has done a poor job providing details about the router, but here are what the Linksys AXE8400 router specifications should look like: 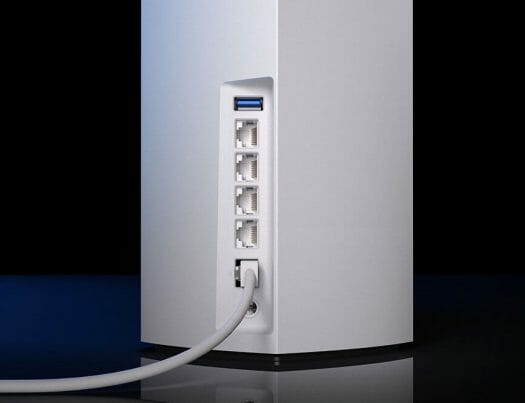 It looks like there may actually be two WiFi 6E routers coming up based on the first photo, but Linksys AXE8400 should be the tall, white model. Mesh networking will also support, and the company plan to offers bundles with multiple WiFi 6E routers. Linksys Aware technology used for home security by using WiFi signals to detect motion within a house will also be supported by the router.

Via EETimes and Engadget.

Since WiFi 6E can push so much data I think it would indeed make sense to add a 2.5GBASE-T 2.5Gbit port (and 5GBASE-T 5Gbit port) to such a router for home use.

Not because the wifi specification but the price…

Of course not, the antenna’s are at the same place so the center of the coverage area is there. Actually specifying the coverage in m2 is quite odd anyway. The radiation patterns are not flat pancakes. Signals also propagate up and down (wifi in your attic 🙂 ) Furthermore coverage patters are generally circular. With a m2 number one is actually suggesting it is something like 14×20 or so, which is definitely not the case. And lastly coverage depends also on walls, antenna positioning and receiving equipment (your device also need to be able to talk back to the access… Read more »

Thanks. I missed the news about this model. But after writing about it: https://www.cnx-software.com/2021/01/13/xiaomi-mi-ax6000-wifi-6-enhanced-router-sells-for-92-in-china/, I found out there was some misreporting or marketing shenanigans, as it’s not a WiFi 6E router, but just a ‘WiFi 6 Enhanced” that does the supports the 6 GHz band.