Last April, we first wrote about Qualcomm IPQ4019 quad-core Cortex-A7 processor with built-in 802.11ac Wave 2 WiFi, as it was found in Qualcomm Mesh Networking DevKit with support for Amazon Alexa. A few months later, we discovered router boards powered by either IPQ4019 or IPQ4029 processor such as Dakota DR40X9 or MikroTik RB450Gx4. The latter does not come with WiFi at all and instead leverages the hardware IPSec encryption built-into the processor.

Today, we’ve come across the first IPQ4019 / IPQ4029 system-on-module we’ve countered so far, courtesy of 8devices with their Habanero and Habanero-I 802.11ac Wave 2 modules based on the respective processors. 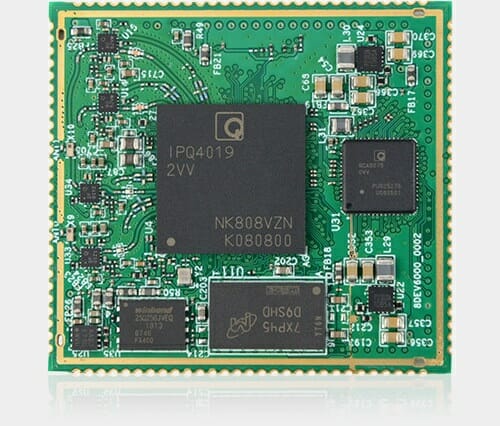 The company provides an OpenWrt Linux image for the board that boots from the NOR Flash. Both OpenWrt and U-boot (Caraboot) source code appears to be available on Github here and there.

There’s no detailed information about the differences between Habanero (IPQ4019) and Habanero-I (IPQ4029), but last time we have seen IPQ4029 supports “Qualcomm IoT Connectivity”, and is also available with an extended temperature range of -40°C to +110°C.

8devices also offers Habanero DVK for early software development and evaluation. The development board comes with the following features:

Habanero module is sold for $55, Habereno-I module for $69, and the development kit for $119. You’ll find more details and links to purchase online on the product page.

The goal would be to have the hardware Nat implemented on netfilter.

Last time I asked to the openwrt guys they told me that only MTK7621A have the offloading driver.

MT7621A does have offload support in OpenWrt however it’s only for 4.14 and isn’t completely stable. There’s work being done on QCA hardware https://forum.openwrt.org/t/hardware-nat-for-lede/1094/169 however it doesn’t seem to have made it into mainline as far as I can tell. That said, most ARMv8 SoCs can handle linespeed (Gbit) without any form of acceleration so it’s probably not a priority especially since it seems to cause issues if you want to use qos for example.

Nop, if you have pppoe like me it isn’t able to push enough data. (I really would scrap my pfsense box and go back to OpenWrt but so far I don’t have found a capable router)

There’s other means to accelerate the pppoe, so called “Qualcomm fast path engine” that is available as open source and can be built publicly on openwrt. That would enable to achieve higher performance on QCA based chipset. See here topics:
https://github.com/waau/qualcomm-sfe
https://forum.openwrt.org/t/qualcomm-fast-path-for-lede/4582/601

Looks like this module could make a really nice, compact, covert drop box.

Put it on a base board with 2 GbE ports, WiFi antennae (or IPX connectors), bring out the USB3 as a device/OTG port, USB2.0 port and PCIe to an mCPIe connector for 4G/LTE, and possibly a battery charger IC, it would be fantastic!

It does support EC25 LTE modem (Qualcomm) as well. So most of the parts that you mentioned it already has. I believe 8devices would help you to bring it even faster if there’s just a need. I did contact them before regarding other module that they have and did receive a quick help regarding my application

Not sure what you mean by it supporting the EC25 LTE Modem? Seems like that is an external component, connected via the mPCIe or USB connectors as I suggested in my initial post?

FWIW, 8devices also has their Jalapeno module, which I see slipped under the radar: https://www.8devices.com/products/jalapeno

Hi
I want IPQ4019 datasheet
Where can I get?
Thanks