There are plenty of low cost routers supporting OpenWRT, but GL.iNet 6416A has several advantages compared to devices like TP-Link WR703N. Both are based on Atheros AR9931, but GL.iNet router has more memory and storage (64MB RAM + 16MB Flash vs 32MB RAM + 4MB Flash), two Ethernet ports instead of just one, and 6 GPIOs, the serial pins, and power signals (5V, 3.3V and GND) are all easily accessible via though holes or headers. Gl.iNet 6416A can be purchased for about $25 on DealExtreme or Amazon US

, and it used to be listed on eBay, but is now out of stock. 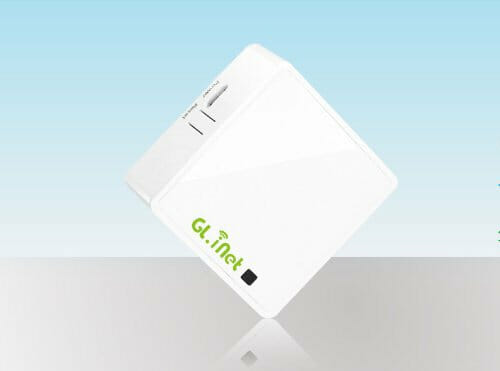 The device is also said to support USB webcams (MJPG or YUV), and USB mass storage with FAT32, EXFAT, EXT-2/3/4, and NTFS file systems using the stock firmware. There are also Android and iOS apps to manage the router.

6416A router, and its little brother, 6408A, with 8 MB flash, are now part of mainline OpenWRT. You can also follow news and access short tutorials for the board on GL.iNet website, and check out the product page.

Do any of these modules (asiarf, tplink, etc) encourage the use of their modules as a development platform?

The product pages usually look like they’re geared to consumer users only.. not necessarily to diy’ers… I want to support any company that supplies the schematics, software toolchain instructions, forum community, etc!

I’ve been using this for several months (I purchased off the ebay store.). It is a great little device.But my familarity with OpenWRT is minimal, so I havent hacked it yet. Wht I’d love to get working is a usb dvb-t tv tuner dingle over wifi. If anyone knows where to start on this, that would be great.

The 6416A model of this device works great for a PORTAL (Personal Onion Router to Assure Liberty) device. See https://github.com/grugq/portal

If for some reasons, you’d rather have the board without the enclosure -> http://www.dx.com/p/gl-inet-wi-fi-router-openwrt-ssh-usb-64mbyte-ram-wireless-repeater-pcb-board-green-346531?Utm_rid=93072394&Utm_source=affiliate