In my review of Kyvol Cybovac S31 LDS smart robot vacuum cleaner, I noted that app permissions meant both the map of your house and GPS coordinates may be sent to the cloud. But it was pointed out to me that earlier LDS robot vacuum cleaners from Roborock/Xiaomi were supported by Valetudo project that removes the need to connect to the cloud, and implements a mobile-friendly web interface as well as MQTT support for integration with Home Assistant or Node-RED.

The project is not a custom firmware for the robots, and instead, the stock firmware is patched with Valetudo which developers describe as an “alternative App implementation + mock cloud which runs on the robot itself.” 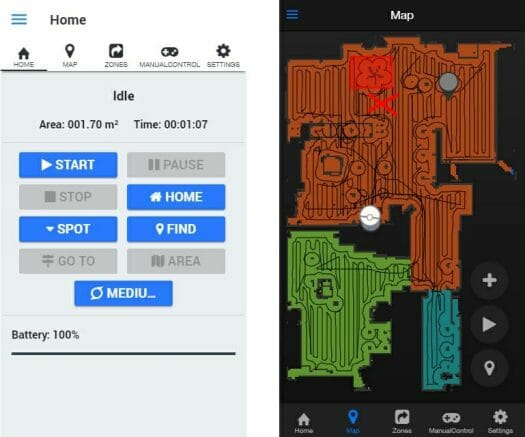 The good news is that you don’t necessarily need to teardown your vacuum cleaner to root it and install Valetudo, but it will depend on the model, and manufacturing date/firmware installed. The less good news is that the process can still be complicated, and only works on a few models including:

If you’re lucky you can update the firmware over OTA (WiFi) using some commands in a Linux terminal, or a web tool called Dustbuilder.  In other cases, getting root access via the USB port, and for some models… well a full teardown is in order:

Once you’ve done the update the Xiaomi app will not work anymore, and you’d only access the robot vacuum cleaner via its web interface which, in most cases, comes with the same features as the mobile app minus cloud connectivity. However, if you change your mind, you can simply factory reset the device to remove Valetudo and continue with the Xiaomi app, at least on Roborock models.

You can find the full details and source code on Valetudo.cloud website and Github.