OSD32MP1-RED development board was first announced last year together with another board based on Octavo Systems OSD32MP1 System-in-Package (SiP). The chip packs an STMicro STM32MP1 Cortex-A7/M4 processor, up to 1GB DDR3L memory, 4KB EEPROM, a PMIC, two low-power MEMS oscillators, over 100 passive components into a single 18x18mm 302 Ball BGA package.

The company has now just announced the availability of the OSD32MP1-RED development platform on DigiKey, Arrow, and Mouser for around $265 and up. There have been a few modifications to the design with, for instance, the USB header replaced by a USB Type-A connector, but the most notable difference is that OSD32MP1-RED is now using a green PCB instead of the red one showed during the first announcement… 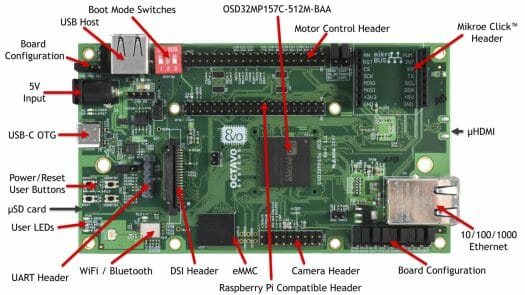 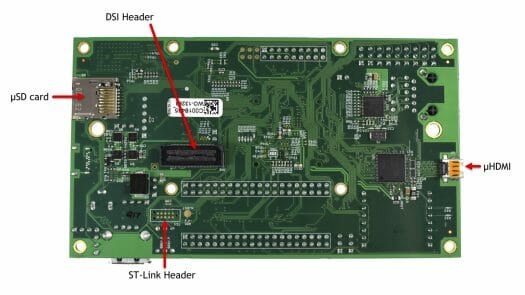 The board ships with a USB cable and a camera gender converter. Since the goal is to promote the company’s SiP, they’ve made available the PDF and EAGLE hardware design files for the board. “Trusted Debian” and “Trusted OpenSTLinux” MicroSD card images are also been made available and can be found together with the device tree files for Linux 4.19 and U-boot 2018.11, and a getting started guide on the product page.

It should also be possible to run mainline Linux on the board, as we’ve previously an STM32MP1 Pico-ITX board supported by Linux 5.11 mainline, and Olimex is about to launch its own STM32MP1 board with almost everything working on mainline Linux.

Last obstracle to release our board is that when FS USB-OTG is enabled it crashes HS USB2 Host. This board has no wired USB Host2 probably for the same reason. It’s always like this when you work with new devices 🙂

The Octovo cpu+ram+pmic+eeprom package looks super cool, and I’d love to have something better than’s Octovo older, Cortex-A5 based Microchip/Atmel ATSAMA5D27C-LD2G to work with, but wow, over double the price, $40 for package. It’s probably worth it but I have a hard time convincing myself to explore this platform.

The tiny SigmaStar SSD210 looks neat & will probably be much much cheaper. Doesn’t integrate as much, which is ok, but man, it only has 64MB ram. That’s just not enough for a viable user environment in Linux these days.