STMicro STM32MP1 is one of the most interesting microprocessor recently announced, as it should allow a relatively easy upgrade path for projects based on the traditional STM32 Cortex-M4 microcontrollers, thanks to backward compatibility, and the extra one or two Arm Cortex-A7 cores enabling Linux support.

We’ve already seen several upcoming evaluation and development boards based on STM32MP157 processor including STMicro’s own discovery kits and evaluation platform, as well as Arrow Electronics Avenger96 board fitted with a tiny 29x29mm SoM.  But I suspect we could see even more compact designs soon, as Octavo Systems has now unveiled OSD32MP15x system-in-package with STM32MP15x MPU, up to 1GB RAM, 4K EEPROM, STPMIC1 power management IC, two oscillators, and over 100 passive components all brought together into a 18x18mm package. 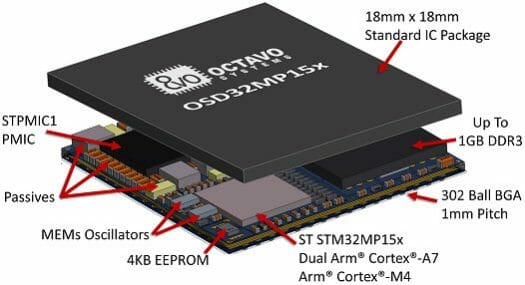 There’s no OSD32MP15x development board just yet, but the company is working on it, and I would not surprised if we eventually get a board similar to PocketBeagle, but featuring STMicro based OSD32MP15x SiP instead of the Texas Instruments Sitara powered OSD3358-SM SiP from the company. As a side note OSD32MP15x is even smaller than OSD3358-SM SiP (18x18mm vs 21×21 mm).

Two parts will become available in Q3 (Samples) and Q4 (mass production), namely OSD32MP157C-512M-BAA and OSD32MP157C-512M-IAA, both with STM32MP157C MPU and 512MB DDR3L, but differing by their temperature range, respectively 0° to 85°C and -40° to 85°C. Further information, including the datasheet and Octavo EAGLE library, can be found in the product page.

Thanks to jealcuna for the tip.

Now that is something really cool. We might even use that were i work because it will reduce the complexity of the final product

Why the M4 core works at lower frequency than the A7 cores? I’ve seen this on many other products, but I don’t understand the reasons…

It’s actually an extremely highly clocked MCU. It’s not an SoC, it’s supposed to be a low-power companion chip. Normally a Cortex-M4 is only clocked somewhere around 30-120MHz.

CA7 generally clocks higher than most CMs due to its longer pipeline: CA7 has an 8-stage pipeline, which allows it to go up to 1.6GHz on 28nm. In comparison, CM4 has a 3(+1)-stage pipeline, traditionally implemented at 40nm. A CM7, though, has a 6(+1)-stage pipeline, allowing it to venture into 600-700MHz territories, which are dwelled by CA7.

A trivial observation: the above purely informative post got downvoted — somebody must have had urine in their cheerios ; )

Not by the process, but by its design. It cannot simply have more clocks because it has only 3+ stage pipeline.

I still don’t understand the relation between pipeline and clock… except for memory bandwidth/latency.

Their cheapest AM335x parts are around [email protected] Maybe this will get down to $15-$20? If so that’s pretty close to the cheapest i.mx6 solder-down modules. The only negatives really is that there’s no LGA version with less pins bonded out and the PMIC doesn’t seem to have a battery charger or power path control.

Note that the BGA has a very large (1.0mm) pitch; IIRC, Octavo says you can break out the SiP used in the PB in 2 layers.

AM335x supposedly gets down to $5, but that’s buying some large quantity direct from TI. TI’s budgetary price is $7.12 each at 1K. The Octavo SiP also includes a lot of passives and such. For smaller volumes, if a PocketBeagle fits, it’s a much better value.

I’d love to see a Beagle-version or similar SBC using this Octavo SiP.

>For smaller volumes, if a PocketBeagle fits, it’s a much better value.

The pocketbeagle is good IMHO but they messed up a few things. There isn’t a complete SD port broken out that isn’t the main SD card slot. So you can’t easily use SDIO WiFi modules like the Ampak ones with it. If you boot from SPI NOR or whatever you can use the SD card slot but it’s not convenient. The oscillator input for the RTC isn’t connected or broken out so you can’t use the RTC-only deep sleep stuff.