There are so many Allwinner H3 SBCs or development boards that new ones are often uninteresting, but with the release of Linux 5.0, I discovered a new board that I had never heard of: MapleBoard MP130.

The board is equipped with 1GB RAM, Fast Ethernet, four USB ports, and various I/O expansion headers. But the form factor looked familiar, and it seems compliant with 96Boards CE Extended, except for some reasons they decided to swap the low speed and high speed connectors, so I doubt the board is compatible with any of the 96Boards mezzanines. 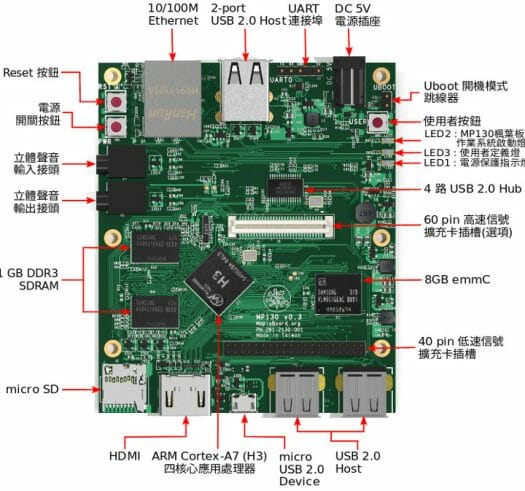 The diagram above probably already gives a clue that the board mostly targets the Chinese market (actually Taiwan), and indeed the product page and hardware/software documentation are mostly in Chinese language.

One person from the UK did manage to get an “Economy Edition” of the board (aka MP130-1) without the HS connector, HDMI port, nor the 3.5mm audio jacks, and he/she found the board was running Debian Stretch. Linux 5.0-rc1 was successfully tested on the board, but since HDMI was not present on this version of the board, video output could not be tested.

Ah yes, these guys. Not their first board. Their website is a total mess though. Good luck finding what you need there…

Is it real problem to port Linux 5 to other h3 boards? Maybe except so rare onboard components, but video output, flash support, other base hardware could have support in mainline. Am I wrong?

Not really a problem, just a matter of developer costs.
Linux 5.0 is not LTS though, so a bit pointless to port.

Not every stuff already landed in mainline but patches are floating around and are even collected nicely: https://github.com/armbian/build/tree/master/patch/kernel/sunxi-next — after some minor DT adjustments the above board will run a 4.19 (LTS) kernel and stuff like HDMI that might still need some time with mainline will already work. After all it’s just another boring H3 thingy.

The blog is what I love most about this board. There are movie reviews, personal life thoughts, traveling pictures. Just found a new world 🙂