The SoM is compatible with two DHCOM carrier boards from the company, namely DH PDK (Premium Developer Kit) for development, and DH PicoITX2 Pico-ITX board for direct integration into products. 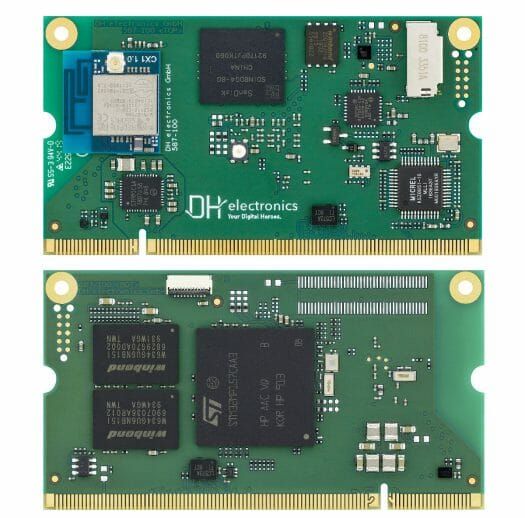 Note some of the interfaces are multiplexed, so click on the image above to enlarge it, and get more details about which interface can not be used at the same time such as MMC/SD and WiFi/Bt.

The company provides a Linux BSP with Debian and Yocto support, and there’s a short Wiki to get started. I found out about the module because it is listed in Linux 5.11 changelog, so that means it should also run mainline Linux together with Etnaviv open-source graphics drivers. 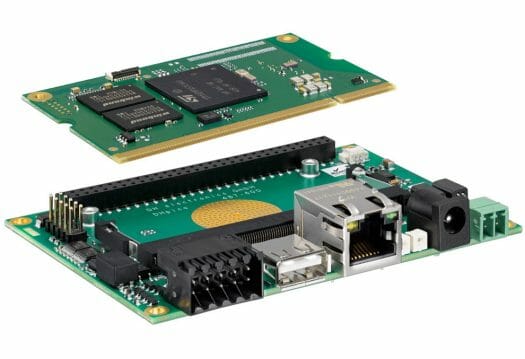 DHCOM STM32MP1 SoM can be combined with DH Electronics’s DH PicoITX2 carrier board to create an STM32MP1 Pico-ITX SBC with the following key features and specifications:

You may wonder what’s the yellow circle in the center of the carrier board is for. That’s not to make the board pretty, but instead, it’s the company’s “5-cent cooling solution”:

… It got its name from the round copper surface. Coupled with a gap pad, its copper surface dissipates the heat from the processor into the inner layers of the circuit board using thermal vias. There, the heat is distributed evenly over the carrier board and is mostly dissipated to the environment by convection and heat radiation. The even heat distribution protects the remaining components from overheating.

Another option for using the 5-Cent Cooling Solution is the direct conduction of the CPU heat to the housing of the product. In this case the heat is passed through from the thermal vias to the housing using  an additional gap pad. This ensures even lower CPU temperatures and eliminates the need for a heat sink even with greater thermal power dissipation.

Pricing is not available publicly, but you can find more information and/or request a quote on the product pages for the module and carrier board.

Did the concept of SOM every pay off? Thereare so many different connection types and either the base board os limiting or costs too much for no benefit. The often cited benefit of just swapping the module to keep your product up to date hardly ever seems to work out. The only reason for a SOM to exist is the fact that many developers shy away from complex Z-matched routing, BOM sourcing in small quantities as well as soldering/reworking BGA and similar. For any other reason a “soft SOM” (=pre routed block to paste into the baseboard’s layout) makes more… Read more »

I think SoMs like this are used a lot in industrial stuff where the main PCB is some massive 2 or 4 layer board with heavy copper and the high profit margin and low volume doesn’t justify spinning a custom module for an SoC.