There’s now another option with MeLE Quieter2 mini PC, that is even smaller than the Gemini M mini PC, albeit slightly thicker, and more important does without the fan, as a completely fanless, silent design as the name implies. 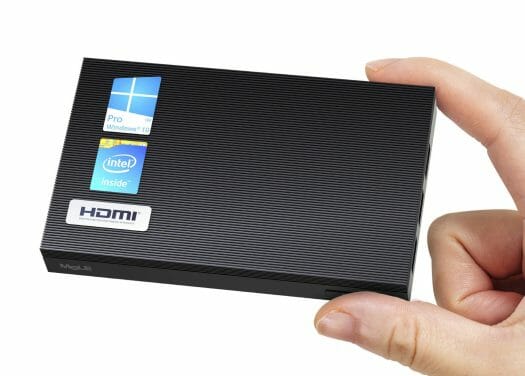 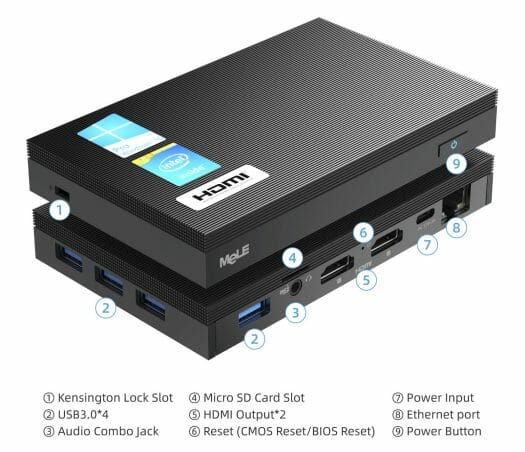 MeLE Quieter2 ships a power adapter, a silicone cooling pad for SSD heat dissipation, and a user manual, and comes preloaded with Windows 10 Pro 64-bit, although the company says it is compatible with Ubuntu and other Linux distributions.

Besides being fanless, the mini PC does come with some advantages over Beelink Gemini M, including larger eMMC flash storage, support for standard M.2 2280 NVMe/SATA SSD’s instead of just M.2 2240 SATA SSD’s, and two HDMI 2.0 ports for dual 4Kp60 display setup. 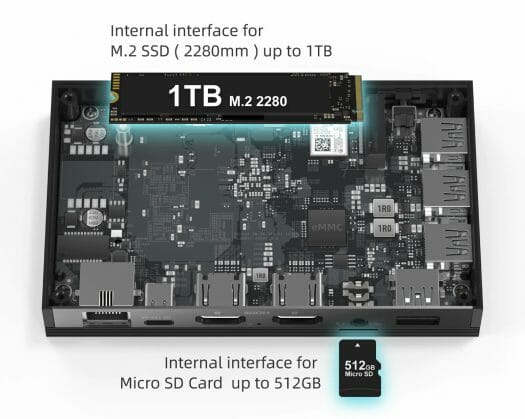 The MeLE mini PC also adds a Kensington lock, and gets its power from a USB-C port instead of a power barrel jack. Let’s hope it’s a USB PD compliant port and not some non-standard 12V USB-C power input as found in Chuwi Larkbox.

We’ll also have to see if MeLE has to tweak the TDP, and performance, to make Quieter2 fanless. Several years ago, Ian reviewed Zotac ZBOX Pi225 SSD-like mini PC, with an even more compact design, and found out Zotac had to limit the performance to keep the temperature to an acceptable level, and as a result, ZBOX Pi225 was significantly slower than other Celeron N3350 mini PCs under load. We are trying to get a sample to let Ian check it out, but no guarantees.

MeLE Quieter2 mini PC can be purchased on Aliexpress for $239.99 plus shipping with 128GB eMMC flash. You’ll save around $3 by waiting around one day as a promotion will soon kick in.

Sensible price for these kind of PC. Maybe they can tweak it later, using fin design for the bottom and maybe, throw in fan connection too. Odroid N2+ design is exemplary IMO (although I like N2 design better, with longer side fin for better airflow).

I’d go for the ODROID-H2+. Almost the same processor as this, should be faster, and a similar price after adding a case and 16-32 GB of RAM. Except the H2+ and even the cases are out of stock.

This is an undeniably cute PC though. Any smaller than this, and you lose ports and most of the performance (see the Intel Compute Stick and ASUS VivoStick).

Yep, definitely H2+, if you can get all, plus case. Although the case is not to my liking. Oh, and remember, the shipping cost from hardkernel too, is quite pricey.

This minipc is if you want all-in-one solution without the need to source everything else one by one. Plus lower power consumption with the LPDDR4.

Well, these CPUs have other instructions like the “sha_ni” instruction set that are not available on bigger models. Overall I find such celeron/pentium quite efficient and faster than many mid-range ARM models that can run fanless.

For ‘sha-ni’, the Cores family has itu too, in a different format, but same usage, me think. Plus, when modern linux distros moves their compiling target to x86-64-v3 with minimum AVX2 –which celeron plus pentium prior 2020 didn’t have– many people will have to migrate to more ‘niche’ distros.

> ‘sha-ni’, the Cores family has itu too
Actually no, at least not even as of 9th gen. I’ve always been a bit surprised by this. It’s not exceptionally useful (except maybe for those who want to mine), but it was just a quick one that came to my mind to illustrate that these CPUs are not just stripped down versions of the other ones but had their own specificities too.

It would be nice to see AMD appear in more mini PCs with Van Gogh (quad-core Zen 2 + RDNA2 at a similar TDP). Except Van Gogh hasn’t been confirmed to exist yet.

It would but no, thanks. AMD does not have any plans on releasing any low cost mini PC. This with AMD would cost 400€, so no.

It’s so sad, but that’s what AMD wants.

Yep. 4 years and sitll like that. Well, let see if they still want to play it like that. They’ll see when ARM catch up with their low cost, low power product.

Maybe, but the die area of a quad-core Zen 2 SoC with some graphics cores would be very low. Although it would be on 7nm. It might be worth it at $300.

Userbase is only asking AMD to make something like R1505G for low end, low power. They just don’t want because there is little gain, but for sure they can make it for mini PC’s in the range of 150-200€, because a CPU like that can be cheap. 7nm and low cost are two things compatible in 2021, but they force us to think opposite 🙁

It’s beatiful, I really like it! One small regret is that there’s no serial console on it, so you need to find a HDMI display when you have no IP address, and these are getting scarce with laptops everywhere :-/ It costs only $0.5 to put a CH340N and a micro-USB connector, why do vendors always insist on purposely forgetting it? Maybe they design based on what would bring them margins instead of how their products could be used. But anyway, with a drill it should be possible to punch a hole and add one, provided the console is available… Read more »

is a serial console useful on a windows pc? what do you see on it?

He said ‘I will not buy this cute and expandable PC. Cuz I do not know how to configure ttyS for redirect console by using USB2TTL’

Huh ? Care to elaborate ? No I mean that if I buy it I’ll have to figure where the port is located inside so that I can solder an adapter and have access to my boot loader and OS. And sadly machines with no UART by default tend not to enable BIOS redirection to the serial port. That’s extremely annoying for such a mobile machine that you could always have in your pocket (especially since it takes its power over USB-C, i.e. it’s supposed to work everywhere). And I’m far from being isolated with this, as it’s a regular… Read more »

“When is the last time you’ve seen a hanging HDMI connector at a friend’s house, at work or in your lab ?”

We must work in very different environments. Every monitor at home has HDMI, every TV has HDMI, the offices I’ve worked in had TVs on wheels for presentations, demos, sharing the kanban board during standups. This is the UK and the tech industry in particular.

Now, if you need a small device that boots even without a monitor do you actually want a small laptop? You’d get a keyboard and mouse for free then.

Well, here I’m seeing only laptops and some of those with an external display are on DP. The only quickly accessible HDMI plug that comes to my mind is the video projector in the meeting room, and I find it quite cumbersome to have to move to a different room just to select an entry in a boot loader. That’s often sufficient to convince me to use one of my other boards. And no I don’t want a second laptop, quite the opposite, the main use I (and a number of people I know) have of such mobile devices is… Read more »

How is it “WINDOWS PC” ?! (Anyone still using Windows?)
BTW, it would be nice if they offer the version without Windows preinstalled, it could cost some 40 US$ less.

I didn’t even notice it was on it, but I don’t care, even once trashed, the price is still pretty correct for such a small device. Also preinstalled windows are probably even cheaper than $40 given the number of people who trash it these days. Ideally it could come without SSD so that you can install yours with the size you want, and zero OS.

Will CNX get one to review, hands on ?

It looks like somebody has not fully read the article 🙂

Yes I m guilty of skimming through the text ?

Wow … what a beautiful device! 8GB RAM, M.2 SSD possible, GigE, USB-C power. Very reasonable price.
At this moment I don’t need another small box, otherwise I would buy it.

I was even thinking of using a bad excuse as “replacing my backup server” to buy one. But that lack of console is a real problem, as I need to be able to connect into it if it fails to boot for some reason.

Nice to see that ports are limited to 2 sides.

It seems that people are often enamored with the small size and tend to forget about cabling.

Cabling and connections need space too so ultra-compact designs with ports on all 4 sides often consume just as much overall space as other larger alternatives.

The most optimal usually is to use the two opposite sides, with USB/jack/power button/leds facing the user, and power/network/display/other USB on the other side. But this one at least took care not to make it look like a starfish 🙂

I’ve asked on Aliexpress’ chat about the power port – they replied “it should be used with only the Type C power supply that we offer”. Considering the text next to usb-c (12V) my guess is its only usb-c plug and the non standard power supply. Too bad, with small barrel jack this would be an interesting option.

Indeed, on the last photo there seems to be a power plane directly connected to this USB-C connector. If so, it’s disqualified 🙁

Despite some shortcomings mentioned in the comments it seemed to meet my needs so I picked up a couple to replace older underpowered units. So far no complaints, but I’m not pushing it very hard. Backup NAS, Smart TV supplement, family big screen Windows demos via remote control, etc. No gaming. I’m not a professional reviewer, but if anyone has any requests or questions I can try to answer them – I do know a bit about this stuff and been reading CNX for several years now (and buying, too). Thank you by the way for tons of great info!

I didn’t find anywhere if this mini pc ram is dual channel or not.