MeLE PCG03 Apo Apollo Lake mini PC supports M.2 80mm SSD’s, but at the time of the review I did not have such accessories, so I only tested the computer with its 32GB eMMC flash and external USB drives. I’ve now received Kingdian N480 240GB SSD courtesy of GearBest, so I’ll install it in the mini PC, test it in Windows 10, and install Ubuntu 16.04.

I’ve received a big carton box for the SSD, but finally the retail package is minimal.

You’ll find the SSD and a screws in the package. You’ll note the device supports both M.2 Key B and Key M sockets.

I’ve already explained how to open MeLE PCG03 Apo, basically loosen 6 screws, and then I just had to insert the SSD with the right orientation (check the 4 / 5 pins on each side), and use the screw already found inside to keep the M.2 card in place.

I just put back the case together, and started the computer in Windows. If you go to My Computer you won’t find any new storage device however.

So I launched Disk Management program, and it automatically detect the new drive asking me to Initialize Disk with either MBR or GPT. I select the later, and used the program to format the drive with NTFS, and it would show as D: drive with 223 GB space.

So at this stage ,you can use the drive normally to install program, and avoid filling up to 32GB eMMC flash too quickly.

I install CrystalDiskInfo 7.1.1 in case people want to get more information like ACS-2 standard, or S.M.A.R.T and TRIM features. 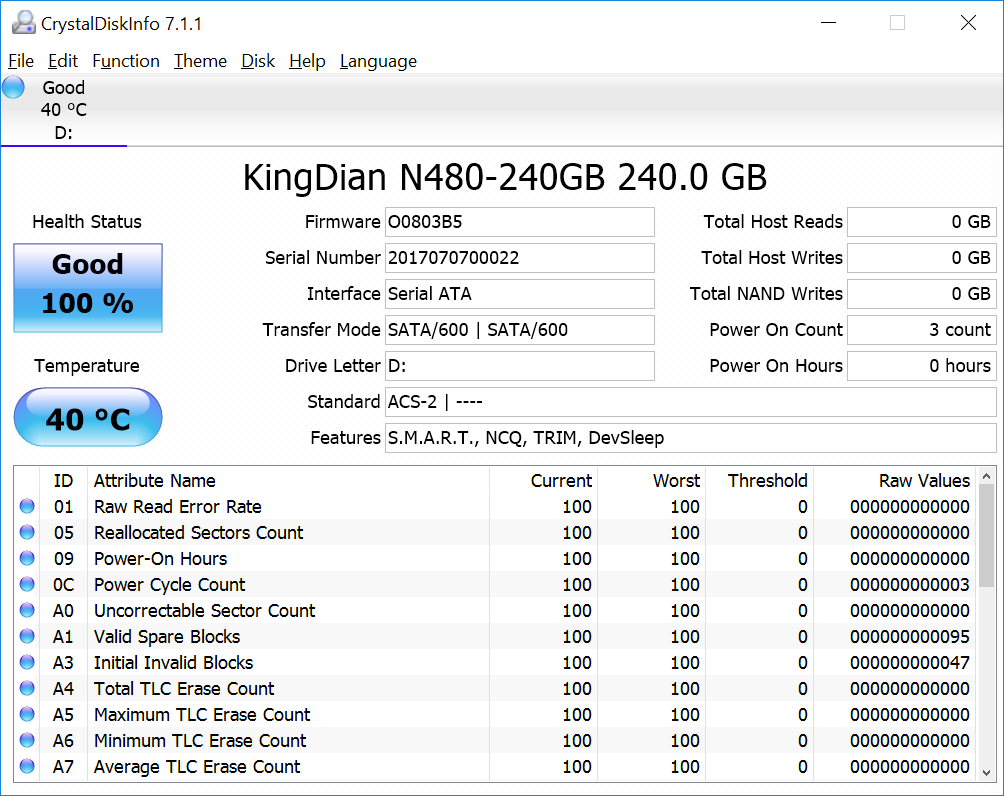 Finally, I ran CrystalDiskMark 5 benchmark, and the performance is pretty much as expected on this kind of device. 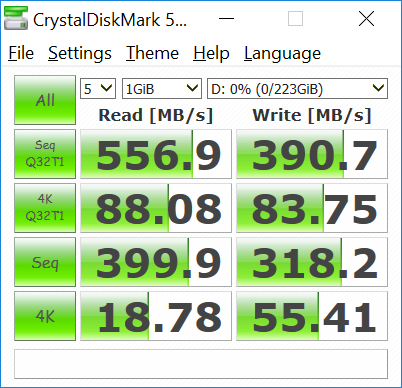 It’s much better than the eMMC flash performance shown below. 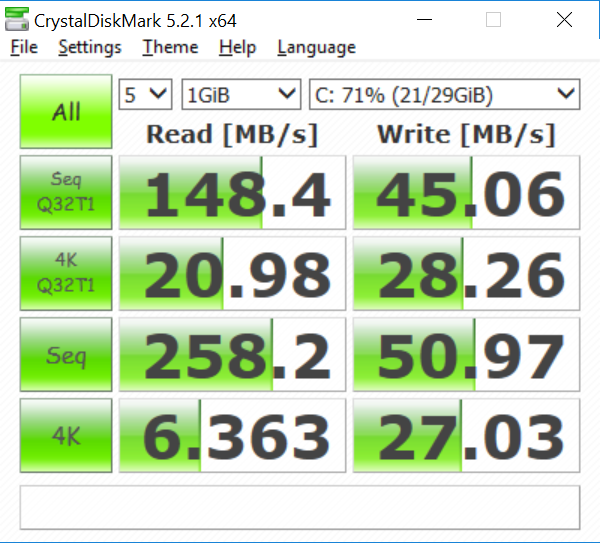 So it should pay off to install WIndows 10 in the SSD, as you’d gain much performance while loading apps, booting, or browsing the web with many tabs. However, MeLE told me the Windows 10 license is tied to the eMMC flash, so if you install Windows 10 in the M.2 SSD it will not be activated. Ian Morrison (aka Linuxium) had the same problem in his review of Beelink AP34 Ultimate, but he found a method to move Windows 10 from the eMMC flash to the M.2 SSD so that it still shows Windows is activated when installed in the M.2 drive. I have not tried in the MeLE mini PC, but it might work too.

Last time, I tried Ubuntu 16.04 in MeLE PCG03 Apo from a USB 3.0 flash drive, so this time, I used the same method, but instead installed it to my freshly installed M.2 drive. The installation took less than 20 minutes, and I could boot to Ubuntu in about 20 seconds, with 9 seconds going to Grub, and 11 seconds to Unity login prompt.

For reference I also ran iozone to benchmark the drive in Ubuntu:

If you are interested in KingDian N480 M.2 80mm SSD, you can purchase it for $58.93 or $93.35 on GearBest for respectively 120 or 240GB capacity [Update: coupon OKDN240 should lower the price. Valid until end of September]. The card appears to be quite popular, so it can also be found on Amazon US, Banggood, Aliexpress, eBay, and other online stores.

Can you please put the output from ‘smartctl -x /dev/sd?’ online for the SSD when running Ubuntu (might require an ‘apt install smartmontools’ before).

Thank you for the output. I bet this SSD still reports 40°C ‘internal temperature’ after some heavy tasks like a benchmark since temp values are fake anyway (compare with ‘SCT Temperature History’ that only lists 0°C all the time). A lot of ‘Unknown_Attribute’, way too much resets on ‘device stats’ page for just 3 hours of operation, no experiences whether to trust in ‘Percentage Used Endurance Indicator’ attribute (the most important one with SSDs since good drive vendors tell you with this attribute when the drive is about to wear out soon). Based on firmware/serial these are the same drives… Read more »

GearBest gave me a coupon: OKDN240