We previously covered Myelectronics’ 19-inch rackmount taking up to 12 Raspberry Pi boards. The solution is nice to keep a bunch of Raspberry Pi 4 in a small space and expose the HDMI ports as full HDMI ports. But what happens if you need to replace a Raspberry Pi board, or simply change the MicroSD card?

Yes, you’d typically need to turn off all boards, remove the rack mount, replace the board/install the MicroSD card, and reconnect everything. That’s probably why the company has now launched two new 19-inch 2U and 3U rack mounts respectively supporting up to 16 front-removable Raspberry Pi (model B) single board computers. 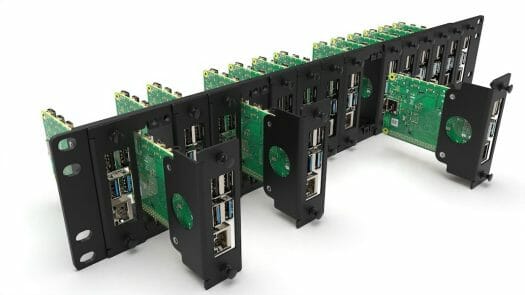 That works a bit with a typical NAS, where you insert or remove a hard drive by pulling it out and back. The 2U rackmount pictured above comes with front-removable brackets where you can install the Raspberry Pi, as well as mounting screws, and provides space for the PoE HAT.

If something goes wrong the other Raspberry Pi can still run normally, while you service the board you need to update or replace. 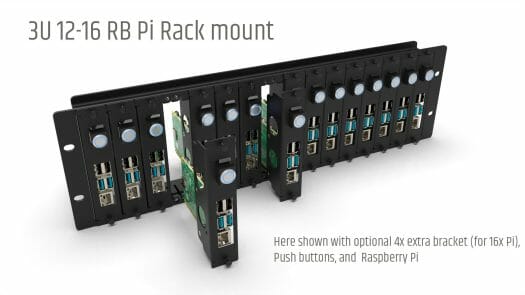 The 3U rackmount is pretty similar except for the extra height (132.5 vs 88.5 mm). It supports 12 Raspberry Pi boards by default, but there’s an extension bracket that allows for 16 SBC’s.

The 3U system offers more flexibility with support for up to 12 Raspberry Pi SBC’s each connected to a 2.5-inch SSD, as well as PoE HATs,  inserts with HDMI, LAN, USB, etc…, as well as power push-buttons.

If you use more than 12 boards, you’d lose the ability to adds SSD’s, but it’s still possible to use 16 boards with 12 PoE HATs and/or inserts. I suppose the solution would also work with Raspberry Pi compatible boards such as ASUS Tinker Board 2,  Rock Pi X x86 SBC, Rock64 board, etc…

Both the 2U & 3U rack mounts are sold for the same price: 175 Euros excluding tax and shipping. The inserts and PoE mounting kit are all available at extra cost.

Il looks quite well designed with some modularity in mind. I suspect however that the power supply can quickly become a mess by being the only internal cable (that may fall inside) if you don’t use PoE. Ideally board manufacturer should more commonly add a JST-XH or PH connector for an internal PSU, and in this case it’s easier to attach the
cable to the bracket and let it come from a PSU installed behind the boards.

Rpi’s are basically like the PC, exist because of their sheer flexibility rather than specificity. In other words, a specialist ASIC could run circles around RpI rackmounts in terms of whatever you are trying to do, faster, more efficient, more capable, less space, except in the case where you absolutely must have RpI, say cloud RPi for say, education compatibility, where you use it as a teaching tool for kids. So…unless this thing takes RpI form factor specialist ASIC boards…i dont see industrial customers really latching on…