Silicon vendors will usually focus on chip design, and provide an expensive evaluation kit to early customers, leaving the design of cost-optimized boards and system-on-modules to embedded systems companies. 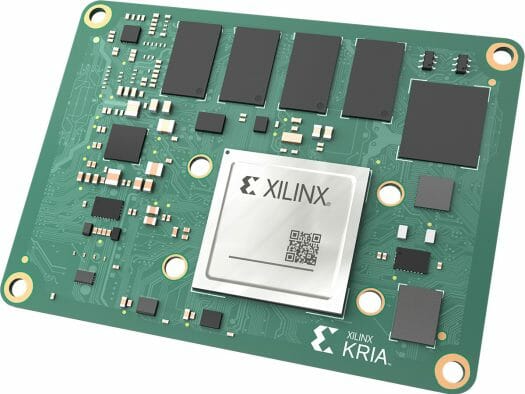 The Kria K26 module delivers up to 1.4 TOPS of AI compute, and is said to enable the development of vision AI applications offering more than 3x higher performance at lower latency and power compared to GPU-based SOMs, using Nvidia Jetson Nano as reference. Xilinx further claims the performance is the same as Jetson TX2i at half the power consumption.

The company provides Yocto-based PetaLinux and Ubuntu Linux distributions, as well as an app store with pre-built accelerated applications for common vision applications. The module supports TensorFlow, Pytorch and Caffe frameworks, as well as C, C++, OpenCL, and Python programming languages through the Vitis unified software development platform and libraries.

Typical applications include security, traffic and city cameras, retail analytics, machine vision, and vision-guided robotics. The commercial version of Kria K26 module will sell for $250, while the industrial-grade SoM goes for $350 both with 10 years longevity, but the industrial module has a longer warranty (3 vs 2 years), and expected lifetime (10 vs 5 years). 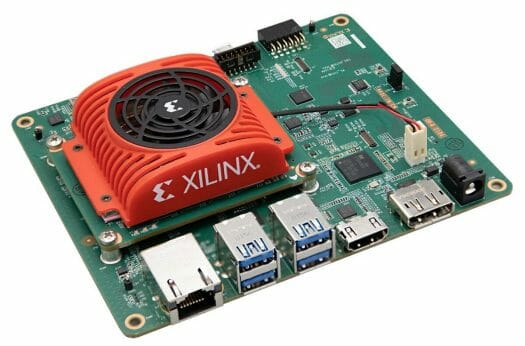 Xilinx is also offering a starter kit to get started with Kria K26 SoM. 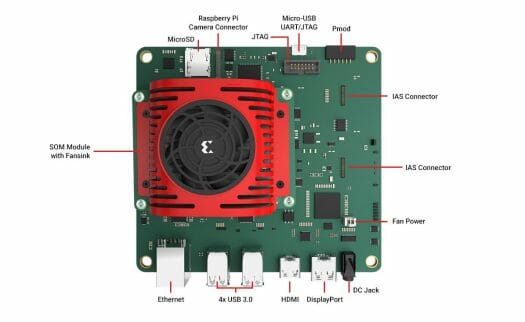 The module is cooled with a fansink. The $199 devkit ships with a user manual, and a sticker, and the power supply is sold separatetly.

That means Xilinx now competes directly against customers that offer similar products such as MYiR Tech  MYC-CZU3EG or UltraZed-EG SoM, although technically they could always say they do not as XCK26 is custom-built, so no other vendor can provide exactly the same type of hardware…

More details about the module and devkit may be found on the product page, and the starter kit can be purchased for $199 directly on Xilinx website or through distributors.

wait, mali 400? I feel this is ancient technology. I guess the purpose of this device isn’t anything graphical, but at least for video acceleration they can include a G31.

Mali 400 will outlive us all